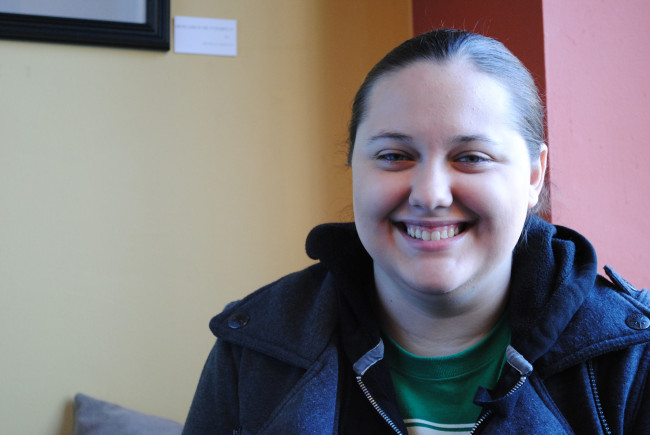 Last September, the local music scene suffered a major loss when underground music venue Cafe Metropolis in downtown Wilkes-Barre closed its doors after 14 years. To lesson the blow, Stephanie Ogozaly has created a memento in documentary form called “The Metro,” set to premiere Saturday, January 15 at 8 p.m. at The Vintage Theater in Scranton.

Ogozaly, a 23-year-old Carbondale native, went to her first concert ever at Cafe Metropolis when she was 16. It was clear to her right away that this place was something special.

“I believe it ended with a punch in the face for somebody, so of course I thought, ‘Well, I should go back.’”

The small building hosted hundreds of local and national acts during its eventful run, offering local music fans a cheap and easy way to see their favorite bands live. Ogozaly’s fondest memory of the Metro was being able to catch Michigan-based ska band Mustard Plug on tour.

“I had been waiting for them since I was a freshman in high school, and they came twice. The first time I want to say was in 2002. … As soon as I found out they were there, I drove home from college, which was a three-hour drive. The show was on a Monday, so I skipped all of those classes. I had to go,” she said.

Being a staple of her concert-going experience, it came as quite a shock when she suddenly learned that the Metro was scheduling its final gigs.

“I hadn’t gone to a show there in a little while because I was at school and everything. I got home and I said, ‘I feel like going to show. Let me see what’s playing.’ I went on the website and found out they were closing,” she explained.

“I had the idea to do a documentary for a couple of years, but I thought, ‘I’ll get to it later.’ They’re closing, so I’ve got to do it right now,” she continued. “It was such a short period of time that I knew I wouldn’t be able to do a proper history of the place, so I wanted to do the last month, getting people’s thoughts on the place and documenting just that month. I would have liked to have done the history, but the timing wasn’t right.”

With only three days to put the project together, Ogozaly borrowed a camera from a friend and received permission from manager Kevin Dougherty to film the next month worth of shows. She then e-mailed most of the bands playing in those next few weeks, practically begging for quick interviews, and thankfully all of them said, “Yes.”

She also requested thoughts and comments from the kids who made Cafe Metropolis the independent music mecca that it was. Ogozaly was pleasantly surprised by the large number of females that responded to her requests, being that the punk, ska, and hardcore scenes are generally “macho” and male-dominated.

“I’m from Carbondale, so I would have to drive an hour to get there. I wasn’t really heavily involved with the scene there. The show would be over at 11, and I would leave right after because it’s going to be midnight by the time I got home, so it was interesting to actually be there more and see how it worked. It’s like the sun, with all these little planets orbiting around it. That was interesting to see the people are entrenched in that scene, especially in Wilkes-Barre,” she said.

With so much ground to cover in so little time, technology played a significant role in what ended up being captured on film.

“Battery life decided a lot of that for me. I had to be very careful. I had to decide, ‘Well, do I need that shot because that’s going to take up five minutes of battery that I could use at the end of the night getting the bands?’ That’s why I’d do the interviews first,” Ogozaly explained.

Her education in broadcast journalism from Utica College of Syracuse University helped guide the direction of the documentary, but from there, the next challenge was deciding what footage would make the final cut.

“It was an outrageous amount of hours that I had. I was going through it as a shot it. I would upload it, look at it, and decide. I think I did four different cuts. It wasn’t until I watched the entire that I would decide to take a piece out and put a piece back in,” she said.

“Even now, with [the premiere] being nine days away, I’m still like, ‘Well, I could go ahead and change that.’ I don’t know if it’s being a perfectionist, but even if it’s just a two-second little thing, no one else would notice it, but I’ll know it’s there, so I’ll want to go and fix it.”

Her careful attention to detail is sure to be appreciated by those who remember the club as fondly as she does, including The Vintage Theater co-owner Conor O’Brien, who was eager to host the premiere screening.

“He told me that The Metro was kind of an inspiration for him starting The Vintage, so there’s kind of synergy there,” Ogozaly said.

“Really, for the longest time, it was the only place we could go for that kind of music. I know we have The Vintage Theater now, but that wasn’t there when I was 16. It was the only place we could actually go and meet people like us. One of the bands said, ‘If you were across the street by the movie theater, you were a freak, but if you were at The Metro, the people across the street were the freaks because you were normal there. That’s what I liked about it. That’s why I wanted to capture that – the essence of it.”

“Someone in the documentary described it as a second home. No matter your gender, your race, or your age, you could go there and it was going to be fun. You might get punched, but hopefully not on purpose,” she said with a laugh.

Hoping to make a documentary on cassette culture and host a band spotlight show on WFTE-FM community radio, Ogozaly is full of plans for her bright future. “The Metro: A Documentary,” released under her own company Rubythroat Films, will always remind her, though, of how she got there.

“I look at it and think, ‘I actually did something. I’m using my skills. I made this.’ But then the actual content of it is kind of depressing. There was a day a couple of months ago where I really wanted to go to a show, but I couldn’t. There are other places around here, but I wanted to go there. It was that high school feeling, but I can’t have that anymore. We all grow up.”