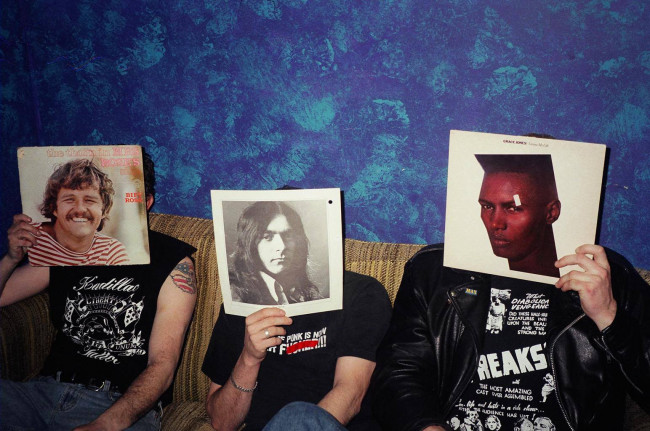 Many of the pop punk bands touring today can say they were influenced by the Ramones, but few can say they knew them personally. The Queers, however, can not only say they were there, but have also continued that rebellious, independent tradition for decades.

The legendary band, on tour with their friends in The-Front, will be stopping for the first time in Jermyn at Eleanor Rigby’s (603 Scranton/Carbondale Hwy., Jermyn) on Wednesday, May 25 in support of their latest record, “Back to the Basement.”

The New Hampshire trio, started by lead singer and guitarist Joe King, a.k.a. Joe Queer, in 1981, started off as a joke but became cult heroes by the 1990s. The band ended 2010 and kicked off 2011 with two months of touring in the U.S. and Canada, then hopped a plane for Italy, Russia, Switzerland, and England, spending a month overseas. No matter where they find their audience, Joe says that not even the language barrier can hold back the support.

“It’s not as different as you might think. The kids are about the same. If anything, they go a little crazier, say in Spain or Italy, for us. But by and large, it’s not hugely different,” Joe said.

“We’re still schlepping it in our van and driving from town to town and having a good time. Some of the crowds have changed. It was more DIY back in the day, but it’s still a pretty good little punk scene. It’s still going good.”

The band hasn’t changed much over the years, save for its lineup, playing the same kind of catchy tunes about sex, drugs, drinking, and having a good time that they’ve always been known for without following trends or relying on the support of a major label. Joe’s attitude hasn’t shifted much in that time either, as he still listens to the same bands he grew up with and continues to produce the music he loves.

“Playing punk rock is sort of a different universe. I would never want to worry about my credit score and getting up Monday through Friday and going on vacation two weeks a year and making my mortgage payment on time and all that sort of thing. It’s a different life, and I might now have dental and medical benefits, but there’s definitely benefits to it. That’s how I grew up, traveling around the world playing music,” Joe explained, adding that you “can’t put a price tag” on the experiences he’s had.

“It’s almost like camping behind your parents’ house with your friends in sixth grade during the summer. That’s the sort of feeling we have. When we get together, we have a good time touring.”

The band has always brushed with major fame, sharing stages with Green Day when they were relatively unknown and playing with Marky Ramone, but Joe said they turned down many offers to sell out along the way, including a spot on the Vans Warped Tour, which he believes is a corporate-run joke filled with bands who take themselves too seriously.

“I think it’s kind of arrogant and conceited to think that you’re so much smarter than the audience. You’ve got to share this big thing and you’re so important and you’re doing them a favor by crawling on stage with a mohawk and a guitar half in tune. C’mon guys, get over yourselves,” Joe said.

“It’s what I got in punk rock to be against – these big rock star shows where you couldn’t meet the band. The bands are acting like rock stars. The singers are parodies of themselves.”

He’s also not a fan of punk acts who use the stage to “pontificate” their political beliefs, which they often compromise anyway to further their careers.

“The whole thing with the political thing is that the bands don’t have anything to sing about so it’s a shtick. I think it is. I think it’s a total shtick … I don’t want to hear that political stuff. I can make my own mind up.”

The Queers, whose name is even meant to poke fun at the pretentious art community in their hometown, have continued to “tow the line” and follow their passion instead of a stable, standard career.

“I used to own a restaurant and I sold it, thinking I’d get another one. I still haven’t, and that was 15-18 years ago,” Joe said with a laugh.

Despite the light nature of their songs, Joe has heard many flattered stories on the road about how their band changed a fan’s life or got them through high school, but one in particular e-mail stuck out in his mind. A young girl living in California was experiences wildfires around her house, and she sat in her room listening to their records as flames surrounded her home.

Joe is currently working on a book chronicling an ill-fated European tour with Marky Ramone and an inexperienced Spanish road crew. Along the way, they lost and found an envelope containing $6-7,000 euros and were led hours away from their desired destinations by their GPS.

“Every day was something else. It was unbelievable … The only time we felt good was on stage. The rest was like being in a nightmare,” he said.

On this tour, he’s looking forward to playing in small venues in Pennsylvania and New York that the band has never been to before, confident that their classic pop punk will continue to resonate no matter where they end up.

“You roll the dice mid-week in some of these small towns, but more often than not they turn out to be great because bands don’t tour there much. I’m sure we’ll have a fun time.”