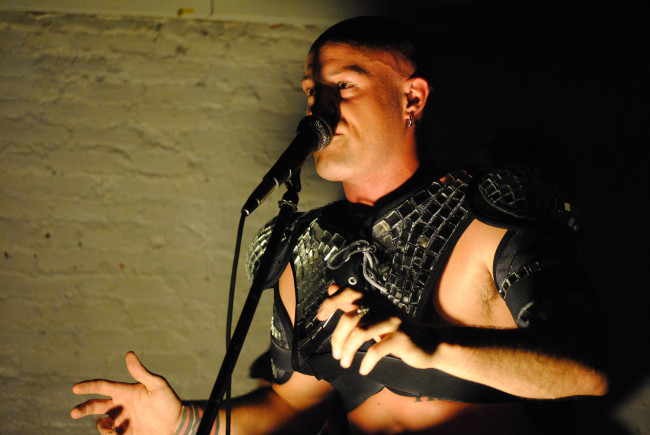 History is usually best left in the past, but there are always those moments in life that you wish you could experience over and over again. Many of mine were spent in cramped basements, smoke-filled bars, grand ballrooms, cheap concert venues, and echoing arenas, each time to watch something created that night than can never be again.

Spin those CDs or repeat those playlists all you like – live music can never truly be duplicated. You can see your favorite band a hundred times, but each experience is a little bit different and, eventually, those artists will move on to other things, whether it be new songs or the great beyond. I’ve had many memorable evenings thanks to these talented men and women, but none have stuck with me so closely as those I had with Felix Sarco.

Many Scranton natives can attest to those days. Over eight years ago now, which is hard to believe even as I type it, this local psychedelic art rock act was blowing minds like it was their job, and I was there from the very beginning. One of their first shows ever was in the Crystal Room in the Nazareth Student Center at Marywood University, and there was something about them that grabbed me that night and told me to stay – and stay I did.

Unlike so many other bands out there, their music was groovy but smart, danceable but complex. They never took it too seriously, yet they carried themselves with a confidence that told you they meant business. In those first few years, Felix Sarco’s Polar Power Manifesto Magnet Supernova (later shortened for obvious reasons) played to a lot of empty, or at least sparsely populated, venues, in some cases only to me. Each performance, however, felt more and more grand, and when people whispered about them around the city, it was always in this “you’ve got to see this” kind of tone.

Much of their mystique, I think, was in the fact that their sound wasn’t easily nailed down due to the various musical influences of each band member. One song would demand emotional resonance, while another would make you laugh when you really listened to its lyrics. No one song could be tacked on to just one genre, and the raw energy of the presentation was a refreshing change from stale cover bands and passing trends. This was lightning in a bottle, or perhaps a disco ball, and it was only a matter of time before it broke out.

Shows went from crowds of five to crowds of 100, and as they lost a guitarist and gained a synth player, they only grew as they developed what became their signature sound. It had this danceable funkiness that made people slowly uncross their arms and start moving their feet. Never in my life did I dare dance in front of everyone, yet here I found myself night after night moving to the beat, at least in the best way I knew how as a gangly nerd with no rhythm. The embarrassment factor never became an issue, though, because when you went to a Sarco show, you knew you were in a good company.

Nobody was there to judge you or point out your lack of sex appeal, and it gave me a confidence in myself that I sorely needed. I brought friends sometimes, but often I just bonded with complete strangers, and once the “regulars” formed, there was no stopping that band. Whether they played downtown or the next state over, I was at almost every show.

This was the music that would get me through college, bad breakups, and my crappy retail job, so it came to mean a lot to me. It gave me something to belong to that I actually felt a part of. I didn’t just connect with the art or the fans, but with each of the band members as well. I got to know them all personally and found each one to be genuine and distinctive. I hoped they’d remember these shows as fondly as I did when they made it big.

Just at the height of their popularity, however, they suddenly called it quits. They used to play in a tiny corner of the basement of the Scranton Cultural Center, but for their final show, they packed the ballroom – a bittersweet night for all involved I’m sure. It seems that some members wanted to take this thing on the road, while others had lives they couldn’t yet leave behind. I don’t think I believed it was happening until my weekends became infinitely duller.

Eventually, frontman Gavin Robb moved to California, and any news I received about him came secondhand. Then I heard he was living in Washington, D.C. Then I was told it was Philadelphia. He always had something musical up his sleeve, but nothing that remained consistent from what I gathered. One day, however, I received a Facebook friend request from a “Gabriel Starwood.” It didn’t take me long to figure out who it was.

There were no samples of what this musician sound like – only random pictures of a man wearing football shoulder pads with tiny mirrors glued to them and skintight pants. A matching mirrored helmet covered his face, and he claimed on his page to be a “sociopathic time-altering robot warrior of organic design.” Only the skirt and fedora-wearing singer of Felix Sarco could have been behind that mask.

Not too long after this obvious revelation came a Facebook event, a debut gig for a band called S.T.A.R.W.O.O.D. at a restaurant called Time in Philadelphia. Despite it falling in the middle of my work week, I was determined to be at that first show. My cousin, who had also experienced the Sarco phenomenon, drove down with me, despite neither of us knowing what to expect.

Actually, the only thing unexpected was the venue itself. As we walked into the classy little restaurant on the ground floor, we wondered if we had the right place. Then we found the second floor, an almost hidden room where a completely different, and thankfully much more relaxed, atmosphere co-existed with the downstairs. How appropriate, I thought, that another hidden gem begins here.

The look on Gavin’s face was priceless as we approached him. One of the first things he said was one of the first things I had thought myself – how fitting it is that I was witnessing the birth of this band as I did Sarco. As the crowd gathered ‘round and the music began, I looked around at the curious faces and growing smiles.

That initial trepidation to dance, that awkward “I like this but I don’t know why” feeling – it was happening for a whole new crowd, a whole different generation of people. They would never experience what I did exactly, as Starwood is definitely its own animal, but it brought back fond memories from a time I believed to be long gone.

I’d describe the band’s sound for you, but I’d just ruin the surprise. Alien invasions, after all, are best formulated as sneak attacks. They hinted at the possibility of local shows, so you may get to experience the madness for yourself soon enough. Comparisons to past music are pointless to make, at least in most instances, but one element definitely remained the same – the reciprocal nature of the beast.

It seems I gave the band something, too. The fact that Gavin was just as thrilled to see me as I was him and his fiancé Sofya was great, but he said it was that familiar, old school energy in the room, that need to impress both the diehards and the newbies, that made Thursday’s performance what it was. As we caught up over beers on a roof in West Philadelphia, I couldn’t have agreed more.

Infinite Improbability is a longstanding column that examines various topics in geek culture for both dedicated fans and those who don’t get the reference. Look for it exclusively on NEPA Scene.

YOU SHOULD BE LISTENING TO: Scranton/Wilkes-Barre bluegrass folk rock band Cabinet
Wegmans Chef Paul Comishock teaches you how to make the perfect ‘Big Game Day’ spread at the Scranton Cultural Center