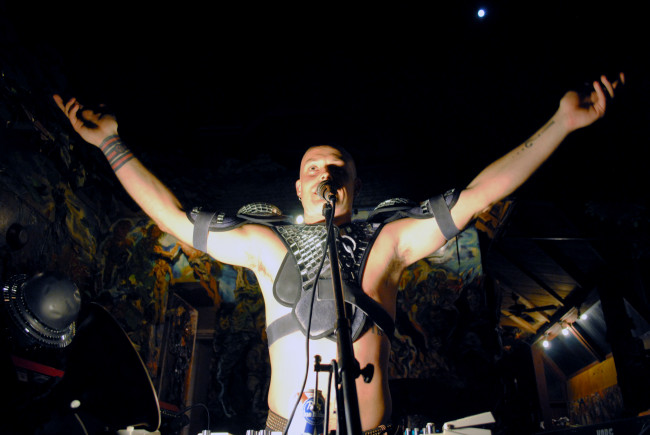 The Northeastern Pennsylvania music scene hasn’t seen anything quite like the psychedelic Felix Sarco, a group formed to “destroy” conventional rock ‘n’ roll, since they disbanded in 2007, but they will have a chance to witness a new form of singer Gavin Robb’s avant-garde performance art when he brings Starwood to Scranton.

The Philadelphia-based “cyber rock” quintet will be joined by local acts The Great Party and Kid Icarus on Saturday, Jan. 14 at The Vintage Theater (119 Penn Ave., Scranton).

Resembling a science fiction movie more than a band, S.T.A.R.W.O.O.D. is an acronym for “Sociopathic Time Altering Robot Warrior Of Organic Design,” and when Robb takes the stage in a helmet resembling a disco ball with a matching chest-piece adorned with tiny mirrors, he becomes Gabriel Starwood, a “a man-machine and master manipulator” sent back in time to prevent humanity from destroying his home planet, Vitrus, in the year 2776.

“My still unfinished mission is to alter the time continuum to limit human expansion in the surrounding galaxies, thus saving Planet Vitrus from the galactic virus known as Humankind,” Robb explained as Gabriel Starwood.

“The majority of the Starwood Mission’s rhetoric centers on my past experiences as the wolf in sheep’s clothing, manipulating the endless evolution of man long before the process began. From famous prophets and prostitutes to lowly soldiers and the leaders that send them to die, I have assumed countless roles throughout your history by entering and controlling any mind or body I deem useful.”

“Starwood” believes this ability has granted him invaluable insight into the human mind, crafting songs using the body of Robb that describe his adventures and experiences on Earth throughout the ages while attempting to steer humans away from a path of intergalactic destruction.

“Having seen your world through the eyes of your most revered historical figures, as well as your outcasts and miscreants, I understand your kind far better than you understand yourselves. I have set these experiences to music to better share my infinitely faceted perspective, with the hope that increasing your self-awareness will keep you from destroying your universal surroundings. Every song is birthed from a life I have lived through someone else’s eyes. Literally,” Robb continued in a robotic voice.

“All Vitruvians are wired with neural components that allow them to communicate telepathically with other Vitruvians. We utilize a five-way telepathic network to collectively arrange our compositions.”

His chrome-faced bandmates, which include Adam Zielinski from former Scranton funk group Alien Red on guitar, serve as “Vitruvian cyborgs” that “service, assist, and protect the Gabriel Starwood prototype by any means necessary.” Despite the overwhelming grandiosity of their emotional yet danceable electronic sound, he insists that the band is not theatrical in their performances.

“It is an exact replication of the lives I have lived and an objective commentary on the past, present, and future I have lived through, all set to the specific tones and signals Vitruvians use to simulate emotion. The story is an integral part of the ‘performance,’ as without it, there is only sound. Inversely, without music, this is nothing more than emotionless theatre,” he clarified.

And while his “current avatar” is familiar with the area, Starwood says he has yet to visit Scranton firsthand, but will be searching for the famed Michael Scott of NBC sitcom “The Office” and attempt to “inhabit his body” while staying in the city. Any mention of The Great Party, Felix Sarco, or Alien Red simply elicits a confused response from the supposed extraterrestrial, though fans of all three are sure to embrace the otherworldly music of this distinctive band.

“We are programmed to interface with enlightened members of your race. Those with a penchant for hyperbole in nomenclature are especially appreciated by our kind. My knowledge of the future can guarantee a ‘great party’ in the least,” he said.

“We are quite familiar with aliens of all colors but have yet to meet one from the city of Scranton, red or otherwise. Felix who?” 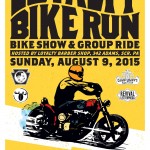