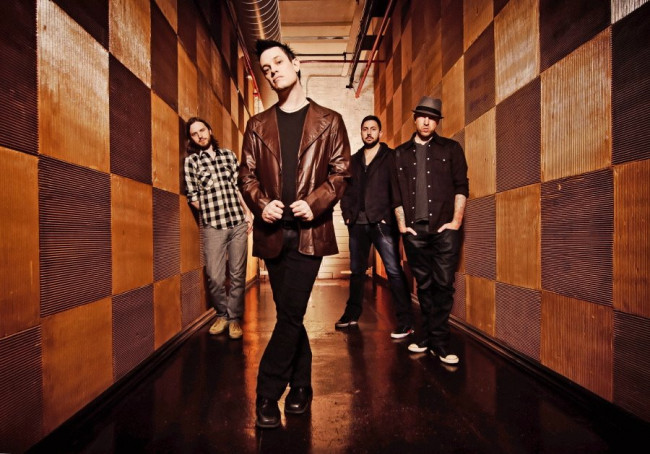 Breaking Benjamin and Lifer are two household names in hard rock, particularly in Northeastern Pennsylvania. But with the newly formed Stardog Champion, some of their former members are looking to tour – and take over – the world.

Aaron Fink started playing guitar when he was 13. His father was an “avid music fan” with a huge great record collection, so he was raised on classic rock and doo-wop, but the moment he changed from casual listener to dedicated player was when his older brother gave him his first listen of Metallica’s “For Whom the Bell Tolls.”

Nick Coyle’s father was a musician, and when his dad’s band practiced in the basement, 6-year-old Coyle would play along on his keyboard. As a teenager, he wanted to learn how to play guitar like Slash from Guns N’ Roses, but at 13, he landed a singing gig with Conspiracy, who asked him to enter a recording studio five days later to cut a five-song EP.

In 1999, the two became founding members of Strangers with Candy, a Wilkes-Barre nu metal group who became better known as Lifer. They released a self-titled debut on a major label and won MTV’s “Ultimate Cover Band Contest” with their takes on popular songs like “Guerrilla Radio,” “Jump Around,” “Take on Me,” and “Nookie,” but Fink and bassist Mark Klepaski found even greater national success with alternative rock act Breaking Benjamin, signing with Hollywood Records in 2002 and selling over five million albums while Coyle formed The Drama Club.

Both Fink and Klepaski were dismissed from the band in 2011 by frontman Benjamin Burnley following a dispute and subsequent lawsuit over a remix on their greatest hits record, though Fink still looks back on his 12 years in the band fondly.

“Obviously, it didn’t end well, so I have some mixed feelings, and it’s kind of not quite yet in my rearview or anything like that. Over a 10 year period, most of the memories are fond memories. Obviously, there were a couple hiccups along the way. It didn’t end on particularly good terms, but I don’t take our success for granted. I don’t take the fans for granted. I was always excited about what was going on; I didn’t just wake up and was like, ‘Oh, I deserve to be here,’ so I kind of kept that perspective the whole way,” Fink told NEPA Scene in Stardog Champion’s first official interview.

“I tried not to turn into a rock star, if you will. I feel like I’m still pretty grounded. I didn’t pack up and move to LA and buy a Lamborghini. Whatever happened with us over time, the bottom line is that we did kick some ass and we had a lot of great fans and we played a lot of great shows. Overall, I try to keep that in perspective more than to dwell on the negatives and the ‘what ifs.’”

Lifer reunited for a local benefit in 2010, but when James McCabe, co-founder of Fantasy Camp Productions, brought Fink and Coyle back together to play in a fictitious metal band called Gentle Rape in the comedic web series “The Coxton Campaign” the following year, they took the amusing opportunity and turned it into a serious year-long writing and jamming session to see if the old chemistry was still there.

As it turns out, it was, so Fink, Coyle, and Klepaski recruited drummer Josh Karis of Leroy Justice to form Stardog Champion and, after two years of preparation and fine-tuning, they’re ready for their public debut. 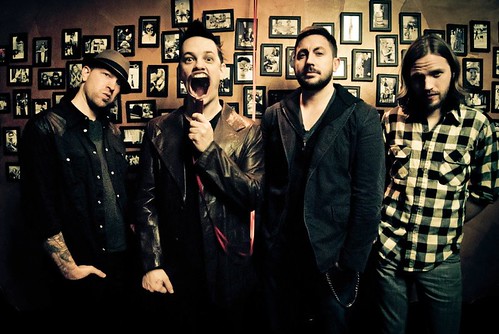 Lifer was formed at a much different time in the music industry – in some ways, a much more positive time. With no Myspace, Facebook, or social networking, the group received fan mail through a PO box, “mostly from girls,” that Fink recently thumbed through.

“It’s so easy for people now to just jump on YouTube and hate on people. It’s the anonymous basement dweller kid,” Coyle pointed out, comparing the difference in decades. “‘Look at his hair. That guy is an asshole.’ What does that have to do with the song? I read some of these comments and they’re not even relevant to anything that you see.”

With no children or mortgage payments to worry about, it was also a much more carefree period for the hungry musicians.

“There’re so many bands to start off with these days, and because of social networking and things like that, everyone is trying to sell their band. They’re so keen on having electronic packages and to sell themselves – everyone is their own salesman these days, which is awesome, but at the same time, it’s a lot different from that school that we broke into at the time,” Coyle continued.

“I’d say it’s easier to get [music] out there on your own, but as far as to make a living at it, no. That has made it harder. There’re too many bands. Back in the day, only a select few bands would ever make it to a recording studio. Now anyone can go to the studio… Everyone has Logic or Pro Tools on their home computers and they could autotune themselves.”

“I think it’s a positive thing, though, in general. If everyone is trying to make art, I think it’s cool,” Fink interjected.

“It levels the playing field,” Coyle agreed. “It’s not so corporate driven where they’re totally in control anymore. It’s good and bad.”

So how does Stardog plan to stand out amongst a sea of homegrown bands? By crafting “honest rock ‘n’ roll” with roots in ‘70s rock and ‘90s grunge, its very name a nod to Mother Love Bone, whose members would later form Pearl Jam.

“I can’t imagine ever in my life just being dedicated to one particular style. It all comes back to rock ‘n’ roll for me, and that’s what I’m into in general, but I like different flavors within that genre,” Fink commented. “To me, the ‘70s and the ‘90s are the kind of music I connect with most, and I feel like it holds up really well over time. It doesn’t sound corny or dated to me. It still sounds fresh.”

“That changed my life musically, my perspective on it. Before that, it was hair bands and spandex and things like that,” Coyle said of his formative years in the ‘90s. “All of a sudden, everyone was into the music and everyone was about emotion and different things, and there was just something about that that connected with me personally.” 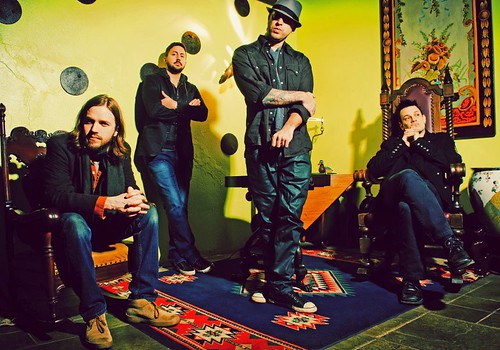 Coyle and Fink have kept things personal in their current writing, as they did in Lifer, but they note that Stardog Champion will not be a direct continuation of their old material. Instead, it is a brand new chapter in their careers, turning the negative experiences of the past few years into songs with positive, relatable messages.

“It felt like Lifer was something that we did when we were a bit younger and a little more immature. We’re all older now and we all have kids and I think there’s a different perspective, especially lyrically. We want to write about different stuff,” Fink explained.

“Those lyrics are very teen angst. They were written, some of them, in my notebooks that I’ve had since I was a teenager that I’ve pulled pieces from. On that first record, we were in our early 20s. You have a different perspective on life then; now I don’t feel like that guy anymore,” Coyle added. “Not that I don’t appreciate where we came from or those songs.”

“It’s three of the same guys from Lifer, so not that we’re not proud of that, but let’s not make it sound like that band. But it wasn’t even hard to do that because we’re different people now. With Breaking Ben, Mark and I had done a little bit of a more harder edge, metallic sounding, real crisp, riffy, big production kind of band, and currently we’re in a zone where we’d like to make something a little more rock ‘n’ roll, if you will, a little looser, a little bit less exact and refined, a little bit more organic. Just turn up the amp and just hit some chords,” Fink emphasized.

“I didn’t want to go back in time… I don’t want to relive my 20s and relive 1999. I feel like we did that, we did it well, and that’s over. I felt like if we were going to do something, it should be fresh and looking towards the future.”

That future will be kickstarted when their debut EP, “Exhale” – produced, mixed, and recorded by Grammy-nominee Neal Avron at NRG Studios in Hollywood – is released digitally on April 23. Locals can pick up physical copies at the band’s first show at Brews Brothers West (75 Main St., Luzerne) on April 27 with special guests Minshara and Farley.

The band’s debut single, “When We Fall,” can be downloaded now for free.

“Generally, it’s [about] the distractions that we have and more how we forgot how to communicate as a society. We’re supposed to be so socially connected, but we’re not really that connected. I think we’re more separate than ever.”

Stardog’s next gig will be at Pointfest in St. Louis, Missouri on May 12, opening for Alice in Chains, Three Days Grace, Papa Roach, Bullet for My Valentine, and more, a fairly coveted gig for an up-and-coming act, though Fink will feel right at home.

“For whatever reason, [Breaking Benjamin] connected with that town, and that was always our biggest market. Wilkes-Barre was always home base, but there’s a hell of a lot more people that live in St. Louis, so it was kind of like home base number two,” he said.

“The only two shows on the books are Wilkes-Barre and St. Louis at this point. Those are the most logical ones to start with, and then we can branch out from there.”

They may have moved past the moniker, but they are still lifers in one way or another.

“Mark and I haven’t been doing too terribly much, so it’ll be fun just to get up there and make some noise, and hopefully people enjoy it,” Fink stated simply.

“What we’re trying to do with this is to not be in a box. We’re trying to just do what we’re feeling and hope that other people come along with us for the ride.”