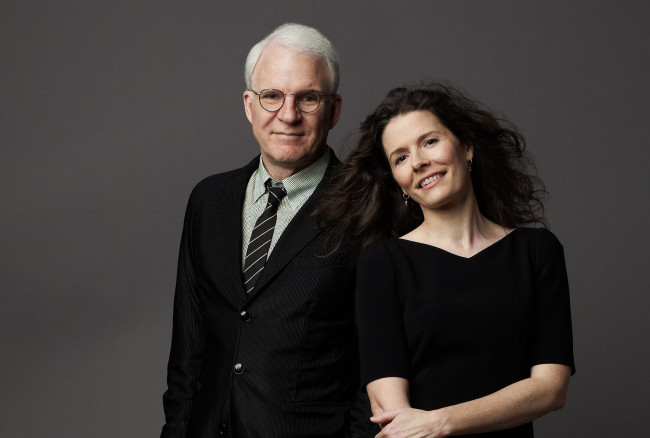 “He has the enthusiasm of a kid,” Edie Brickell says of her recent musical collaborator, Steve Martin.

“I’ve worked with younger bands, younger musicians who have been disheartened or jaded somehow by what they experienced or what they do, and Steve is just bright as can be, like working with a teenager. It brings out the youth in everybody around.”

And at 67, Martin’s talent hasn’t aged or faded a bit. Most widely known as a comedian, actor, author, and playwright, the white-haired funnyman earned a Grammy Award in 2009 for Best Bluegrass Album for “The Crow: New Songs for the 5-String Banjo” and was named Entertainer of the Year by the International Bluegrass Music Association in 2011.

Brickell, an accomplished musician in her own right as a solo artist and with the New Bohemians, told NEPA Scene that she was a fan long before they shared a stage together.

“I was just complimenting him on his music because I was really blown away that he could do this as well as everything else,” she began.

“I think it’s thrilling when somebody does music that you like and you get to tell them [that] in all sincerity, and I said, ‘If you ever want to write a song together, I sure would like it. I think it’d be fun.’ He said that he had a tune that he hadn’t written a song to yet, would I like to hear it, and I said, ‘Sure.’ And then we got together and I was inspired by his music and I was able to write a song to it, and then after that, he kept sending them, and there was always a song there for me.

“Sometimes there were two choices of songs. I just felt so much from his music.”

The chosen tunes became “Love Has Come for You,” an album of 13 roots and bluegrass tracks released in April through Rounder Records, and this Digital Age method of swapping song parts suited both songwriters perfectly.

“I like to just sit and be private and make mistakes and go over things, and I wouldn’t want somebody to have to suffer through that part, that birthing part,” Martin acknowledged.

“I kind of didn’t have to check with anyone… I just kind of worked out the songs to my satisfaction, and for me, it was something that was – it sounds corny – waiting to get out for a long, long time, maybe 30 years, but I didn’t know how to do it.”

“I’ve never written like this before, and I’ve always wanted to make an album like this where I love it all the way through and it varies in feel and personality, in terms of the songwriting. I can even hear the main thread of the banjo all the way through, but it varies and changes a lot, too,” Brickell continued.

“And the production is gorgeous. [Producer and musician] Peter Asher made such a warm and lush record, and it doesn’t sound like it can be dated because the instrumentation is acoustic and real. There isn’t much trickery – I don’t think there’s any. It feels like all the records I grew up listening to and that I love.”

“It’s like everything seemed just exactly right when I sent it to her,” Martin added. “I’m like, ‘Yeah, that’s the way I really want it to sound.’”

Their writing may have been isolated, but their spontaneous processes were strikingly similar.

“When I would hear his music, I could almost see sort of movies run, pictures, images – I saw so much imagery, or I would just start singing. I can’t really say which came first. I would just start singing, and I would listen and I would hear there’s a sentence there, and in that sentence, there was imagery and there was a story. When I paid attention, then I just kept singing and made it rhyme and continued with the story. It basically just flows out,” Brickell described.

“There’s a song right there, and all I have to do is just follow it. I can’t really explain it more than that. You just feel what the melody is saying, with the melody of his banjo tunes and the way that he plays it, the sensitivity with which he plays – the character, the personality. You just melt into it and allow a voice to emerge from within.”

Making appearances on the “Late Show with David Letterman” and “Late Night with Jimmy Fallon,” Martin and Brickell have since taken their new music on the road with the Steep Canyon Rangers, who have played, toured, and recorded with Martin many times since their first “Prairie Home Companion” collaboration in 2009, including the Grammy-nominated record “Rare Bird Alert.”

“There’s exciting songs, but there’s also mellow songs. In our previous show with just the Rangers, there weren’t that many mellow songs. And now we have a percussionist, and we also have a lighting designer, which is very exciting for us too because the show looks so beautiful. The show is actually much more professional than it’s ever been on this tour. That’s an exciting aspect to it, and we’re making actual, real, sophisticated music in a show circumstance. Before, we were a bluegrass band, but now we’re something else. I think we stepped it up a notch, having Edie on board,” Martin enthused.

“I’m curious to see how the next leg [of the tour] works out… We’re still figuring out what song should come after what song, but that’s a process you do almost on every show tour. You’re always shifting songs around.”

Brickell is just as impressed with Martin now as she was when she first complimented his work.

“I don’t know how Steve does it. I would be absolutely exhausted to be Steve. He has to remember so much music – it’s over two hours, the show, and he’s out there, heart and soul, and he’s playing and then just improvising comedy in between,” she noted.

“He’s just firing on all cylinders every night because we play six shows in a row. I really don’t see how he does it. I’m pretty amazed.”

When asked if the pair have anything special planned for their stop at the F.M. Kirby Center in Wilkes-Barre on Tuesday, July 2, it’s surprisingly Brickell, not Martin, who is quick to quip.

“We’re going to do the Wilkes-Barre Hop!” she joked.

“Every show to us is special. We give it 100 percent every time,” Martin said.

“We just do the best show we can every time.”

Steve Martin may be deeper into his bluegrass music now more than ever, but that doesn’t mean he doesn’t have time for Twitter – or for some quick jokes. Here are some of our favorite recent tweets from @SteveMartinToGo: