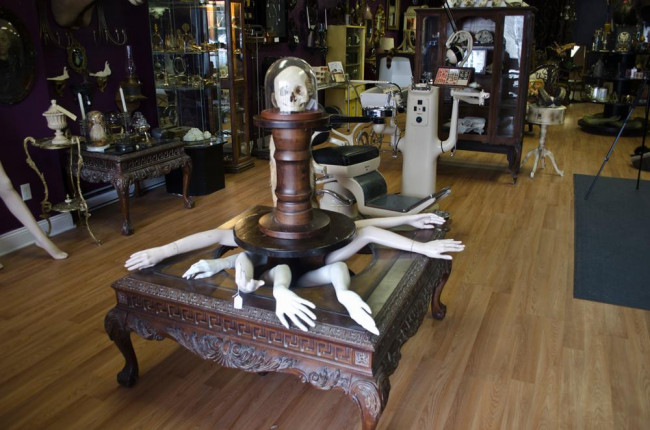 The centerpiece on the coffee table in front of the door is a human skull under glass, accentuated by severed white mannequin arms reaching up for it from underneath. Heads of deer, a ram, and other expired animals line the deep purple walls alongside taxidermied wolves and birds. Butterflies and beetles are pinned behind elaborate frames next to random bones, sets of teeth, and dental molds. A bin of antlers hangs in front of skulls resting on yellowed Bibles while an autopsy saw sits near a case of ornate perfume bottles from decades past.

If this scene sounds more like a horror film setting than a new shop in Kingston located between a daycare and a hair salon, you’re not far off – the owners of The Strange and Unusual Oddities Parlor hope to invoke the same sense of sinister uneasiness with their décor.

“This stuff is so weird and so morbid. A lot of it is just like living in a horror movie. This stuff is real. It’s a very strange thing to explain why one would want to collect all this. It kind of just happens organically,” began co-owner Ryan Ashley Malarkey.

The timing of the opening, she said, coincides with the heightened popularity of such macabre movies and television shows, and boutiques as strange as this are popping up in cities across the country, though this will likely be the first of its kind in Northeast Pennsylvania. Co-owner Joshua Balz would know – he’s been in these shops across the world while traveling as the keyboardist for Scranton-based metal band Motionless In White.

“If you know weird people, you get weird stuff,” Balz said, freely outing himself as such a person.

“He’s lucky because he travels all over the country, and on his travels he picks up stuff along the way. We just got these antelopes that came from Colorado,” Malarkey added.

“It’s just like a collection of weirdos because we’ve been getting all this stuff from other weird people that collect the same weird stuff.”

Balz and Malarkey have been collecting oddities for many years but had no initial plans to sell off their possessions, despite diminishing space to keep it all in. After finding the spacious but manageable location, just across from the Hoyt Library, they “fell into it” and decided within the last few months that it was time to share what they had with the world.

“At first, we weren’t planning on opening a boutique. We were just trying to collect for ourselves because there’s nothing like that around. There’s no boutique or anything in the area where you could get this kind of stuff aside from the flea market, which is a crapshoot. So we started collecting, collecting, collecting, and then we got to the point where all of this stuff was ours from our personal collection, and when we decided we were going to do a boutique, we started really getting on our game and figuring out what holes we had and what we needed to fill,” Malarkey explained.

“We have lots of stuff that’s so super super weird and rare that we just want to put it (out) for show so people could actually see it.”

“Some stuff just isn’t for sale because it’s ours,” Balz emphasized.

Since then, they’ve been working on securing the proper permits, insurance, and many other last-minute concerns before their opening last weekend, though waiting on baboon and wildebeest skulls from Africa to get through customs isn’t an issue most businesses face on a daily basis.

“It’s a mixture of old stuff and new stuff, like vintage stuff and weird stuff and cool stuff and bringing everything together to be really one-of-a-kind that you can’t get anywhere else. Just trying to make the weirdest place we possibly can,” Malarkey said on the store.

“So far, the response has been really big. I’ve had a lot of people contact me from tattoo shops and ask if we have weird stuff. I’ve had other women, because we have all the frames and all the ornate stuff, contact me from hair salons and stuff telling me they wanted to do a vintage thing.

“The area just needed something weird because if you want to buy a really strange, weird present for someone, where do you go? On the Internet,” which, the couple says from experience, has upsides and downsides.

“Of everything in here, most things are a conversation piece.”

Considering the content, however, the conversations they start may not always be pleasant, but they’re prepared for that.

“It’s definitely going to be a little bit of a culture shock because no one, especially the older people in the area, has ever seen anything like this before,” Malarkey noted.

While she’s nervous that people will get “the wrong idea” with their first impression, she also believes it will be a place where “all the weirdos can unite” and “finally have a place to convene.”

“It’s not like we worship Satan or anything like that. It’s ridiculous. We just like our whole life to be like a horror movie. There’s no real purpose for it or anything. We just think it looks cool,” she insisted.

“Everyone is going to have a problem with something. We just know that we’re not doing anything inhumane or illegal. We know that there’s other weirdos that appreciate the same stuff, and we think maybe it’s what this area needs.

“Death is a part of life, and we’re not celebrating that per se. … We’re more into preserving life.”

All of the taxidermy is vintage, not commissioned, and some of the more disturbing items, such as stillborn kittens floating in tiny jars, were dead long before they ended up on a shelf.

“We love animals,” she beamed as her little dog Toronto happily ran around the store. “We would never promote the killing of animals. We just promote preserving what’s already dead.

“All the deer skulls we have are from hunters that hunt normally that we just ask… to save the skull for us. It’s keeping these things and preserving these things that are going to waste anyway. Most of the taxidermy is old. Every single one of the birds that we have came out of somebody’s storage locker that they’ve had for 30 years.”

The Strange and Unusual is also home to historical items, such as the original on-call leather bag of Dr. John Heinz, the namesake of the John Heinz Institute of Rehabilitation in Wilkes-Barre, his medical tools still inside it.

So why, with Balz’s blossoming musical career and Malarkey’s successful tattoo business, would they take a risk with such a controversial store in an unproven market?

“Just last year, [Motionless In White] did 24 countries, three or four continents, and over 300 shows in one year, but I have a ton of downtime. We play for an hour a day. We do meet and greets, some interviews, some radio stuff, but you think about it, it’s a couple hours a day,” Balz pointed out.

They’re not just buying and selling, but putting their own touch on items, such as bugs from Thailand that are preserved and pinned within freshly painted vintage frames. He admits, however, that opening his own store at 24-years-old is “stressful” and “kind of scary,” but he makes light of the pressure with a confident smile.

“Another thing is I don’t want to sell any of this stuff now. We were talking about it. ‘Let’s just call it off. We’ll put a bed in the back.’ We’ll just move right in here,” he joked.

“That’s another scary thing – finding more unique things to put in the spots that we sell. That’s scary. We make a lot of stuff,” he acknowledged, pointing to a recently reupholstered set of dining room chairs that were once an “ugly mustard yellow,” planning to create a “Games of Thrones”-style spread on the table.

He hopes that word of mouth will help spread their customer base and allow them to keep rotating new items in to encourage frequent visits. With millions of followers through his social networks and built-in fan bases from their respective professions, Balz saw massive amounts of support even before opening.

“There’s people flying from like Arizona. People are telling me, ‘I can’t wait to fly down.’ People message me, ‘We’re driving two hour, three hours to come on Saturday.’ That’s crazy,” he said.

“I made an Instagram for the store and it got 2,000 followers in like a week. It (wasn’t) even open yet!

“Even if one person doesn’t buy something, they’ll tell three people. Hopefully I want to sell enough so we recycle enough stuff to keep it interesting.”

Thanks to a friendship with the owner, Balz said that his shop will be one of the only suppliers on the East Coast of BlackCraft clothing, with some exclusive apparel on the way, though the “power couple” also plans to keep all prices reasonable.

“I was in Tennessee yesterday, and whenever I’m on tour, I have nothing better to do, so I walk around and I find antique stores. I found one yesterday and (they sold a) frame that was $1,200. I have the same one! It was $100! I just don’t get it,” Balz recalled.

“I get rent is expensive and overhead, but some people can only afford $20 things. Even if you can’t buy a $600 or $700 couch, you can come and buy some little bones for $5 or a mannequin arm or something weird.”

“Even though we sell some antiques, we’re not trying to be like a snobby antique store. A lot of the time, you go to antique stores and it’s so ridiculously overpriced and they’re so snobby about it,” Malarkey continued.

While it may seem like The Strange and Unusual is catering to a very specific clientele, they assure customers that there truly is something for everyone.

“Every person that comes in would be able to buy some kind of gift for someone. Say a mom has a seven or eight-year-old son that’s into reptiles and stuff. We have an articulated snake skeleton right there. It’s something cool that a boy would like. Or say somebody wanted to buy their six-year-old little girl a present, a present that she has for her whole life. Buy her a beautiful little perfume bottle that she has forever,” Malarkey listed.

“I think everybody has a little bit of weirdness in them.”

If that’s true, then the boutique will have little trouble attracting the curious, brave, or just plain weird, and those are exactly the kind of people they’d like to meet.

“It’s almost like a haunted house where everything’s for sale – almost. We want it to be as creepy and eerie as possible,” Malarkey observed.

The Strange and Unusual Oddities Parlor (285 Wyoming Ave., Kingston) is located across from the Hoyt Library. Its hours are Tuesday-Sunday, 12 p.m.-8 p.m. Find the shop on Facebook.