Motionless In White teamed up with Revolver today to premiere the lyric video for “Puppets 3 (The Grand Finale),” a song that will appear on their upcoming album “Reincarnate.” Watch the video above.

The track features Dani Filth of Cradle of Filth on guest vocals and seems to mix some black metal influences into their sound. The Scranton-based group will release “Reincarnate” on Sept. 16 through Fearless Records.

“Reincarnate” is now available for pre-order on Amazon, MerchNOW, and iTunes. Fans who pre-order the album on iTunes will receive the first single, also called “Reincarnate,” as an instant download.

The lyric video for “Reincarnate” was released on July 8: 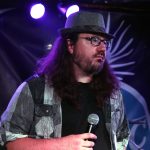