Earlier this year, the Lackawanna Historical Society helped actress Valerie Bertinelli trace her family history, and now the results of their search will be aired on The Learning Channel on Aug. 13.

Best known for her roles in “One Day at a Time,” “Touched by an Angel,” and “Hot in Cleveland,” the 54-year-old actress and health activist visited the LHS’ headquarters, the Catlin House (232 Monroe Ave., Scranton), in the spring to peruse historical records for an episode of TLC’s “Who Do You Think You Are?” Though Bertinelli was born in Wilmington, Delaware, the local staff found records “revealing her roots in nearby Jefferson Township” and was “instrumental” in the episode’s production, according to a press release.

The episode will premiere on Wednesday, Aug. 13 at 9 p.m. The LHS will host a viewing party at POSH @ The Scranton Club (404 N. Washington Ave., Scranton) that night from 8-10 p.m. Complimentary appetizers and a cash bar will be included for a small donation at the door. For dinner reservations, call 570-955-5890. The LHS can be contacted at 570-344-3841 or lackawannahistory@gmail.com.

Viewers are encouraged to discuss the show on Twitter using #WDYTYA. 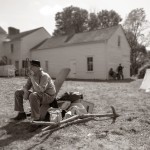