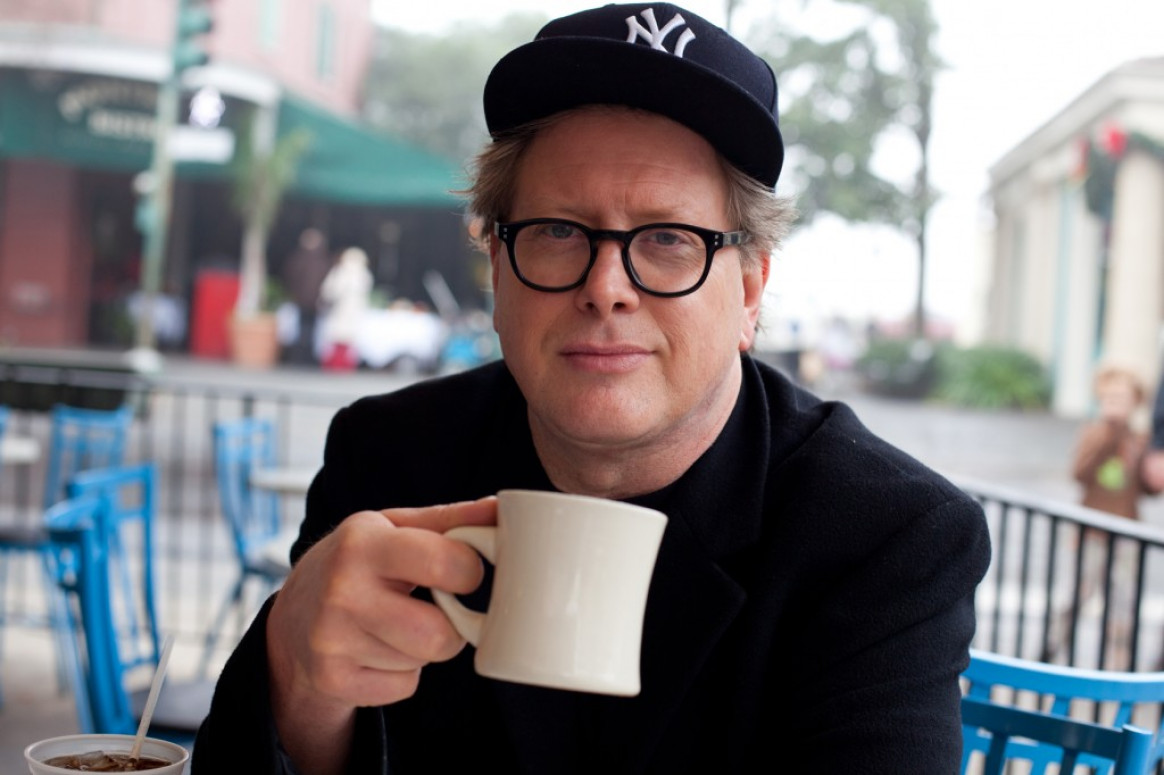 Darrell Hammond is sniffling and searching for tissues when NEPA Scene arrives at Wise Crackers Comedy Club in Mohegan Sun at Pocono Downs. Despite being under the weather, he’s as friendly and gracious as he always is whenever he’s visiting Wilkes-Barre.

Wise Crackers is owned by his longtime friend Scott Bruce, so it makes sense why he’s here performing two night of live comedy starting tonight instead of lying in bed at home or fielding questions from every major news outlet in the country just one day after it was announced that he would be replacing Don Pardo as the announcer for “Saturday Night Live.”

Though maybe “replacing” isn’t quite the right term, as he won’t just be impersonating Pardo.
“I think his idea is that Don is not really replaceable, so he wanted a hybrid between me and Don Pardo,” Hammond said of “SNL” creator/executive producer Lorne Michaels’ decision.

“So yesterday we were in there for three hours trying to talk like Don but not talk like Don. You can’t discard somebody like that, but you can’t keep doing it. The idea is we’re going to try and do like a hybrid.”

To say Hammond has the experience for the job is an understatement – not only is he the show’s longest running cast member, he also filled in for Pardo six times in the 39 years he served as announcer. Still, he was never completely comfortable with it, even temporarily.

“I felt bad about it. I didn’t want to feel like he was replaceable or repeatable or that I was as good as him or anyone was as good as him. He had laryngitis and the show was live and we had to do something,” Hammond recalled.

“He was always gracious about it. We were pretty fond of each other.”

In his friend’s words, Pardo’s was a life “well-lived.”

“(Pardo was) a super respected and loved guy in gladiator school because ‘SNL’ is a real hard place sometimes. The competition is really intense. He was a big deal over there,” Hammond continued.

“Kids, grandkids, big family – he lived life. He really got it down. He really nailed it, you know? We were all weepy when he left.”

“SNL” has been making headlines recently for shaking up its cast in the forthcoming 40th season, but Hammond seems to be one of the few comedians involved who doesn’t have any strong opinions about it.

“It’s a place where nothing is certain, ever, until 11:30 Saturday night. All information is changing information; everything is written in disappearing ink. There must be 1,000 things to consider just to get it on the air, and I ain’t a multitasker. I can just do my little piece. It’s an enormously complicated job to produce a live comedy show. I can’t even begin to fathom how they do it.

“I was there longer than anybody – I still can’t figure out how they do it,” he added, laughing again. “It’s true.”

Now 58, the spot-on impressionist was a regular on “SNL” from 1995 until 2009, though he didn’t leave because he was also the oldest cast member in the show’s history.

“The main reason for leaving was that (George W.) Bush wasn’t in office anymore and I didn’t play anyone in the new administration, so it’s not imperative. As much as you love being there, it’s not an imperative that you are,” Hammond explained, though he feels it’s important to return now.

“Now, it kind of is. It’s a job. It’s a necessary job, so I feel comfortable about being there. I was over there yesterday; I forgot how cool it was over there.”

He’s made several cameo appearances since leaving, but it’s the rush of the job that he’s missed.

“After a while, you get a little bit addicted to the adrenaline. It’s kind of hard not to. I remember the first week that I wasn’t there anymore. I was lying in a hammock in Vero Beach, and as nice as that sounds, you’re thinking, ‘Wow, that’s over now?’” he sighed.

“It’s like astronauts say. They’re playing shuffleboard in Arizona. ‘Hey, nice life,’ and they’re like, ‘Yeah, but it’s not as good as walking on the moon.’”

He praises a woman for saving his life when she stops the conversation for a moment to bring him chai tea and fruit to improve his worsening cough that he’s admirably ignoring.

It’s a good time for Bruce to come in and introduce himself, so NEPA Scene asks him how he met Hammond roughly 20 years ago and why they’ve remained so close.

They both looked at each other and cracked up.

“I’m not going to admit to anything,” Hammond insisted.

“We went through the trenches together. We’ll put it mildly and say that,” Bruce began.

“Probably the best way to describe us is we met on bar stools waiting for our turns to go on at various comedy clubs, probably more Dangerfield’s (in Manhattan) than anywhere else back in those days. We’re just fellow commiserators going through our marital woes and every other kind of woes.

“The funny thing about comedians, and Darrell will back me up on this, when you meet a comedian that you’ve never met before, which doesn’t really happen that often because there aren’t that many of us and most of us know each other, at least to some degree, but when you meet a comedian, you automatically have a history with that comedian even if you’d never met before because we both know the waitress in Cincinnati. We both know the bartender in Indianapolis…

“We both know Chloe in Des Moines…” Hammond interjected.

“Well, yes. Some better than others,” Bruce said knowingly.

“Guilty,” Hammond admitted, appropriately waving a phallic banana in the air as he continued eating.

“That makes for a really fascinating thing for these two people who have never met before who can literally just sit down and start talking like they’re old friends because all of our friends are in common, they’re all other comedians, and again, the outside periphery of that is all the comedy club circuits are the same people,” Bruce mused.

“Even though we’ve just met, we have a complete history, and unfortunately, Darrell’s and mine is checkered and weird.”

“It was tough to get through combat, but you did what you had to do,” Hammond encouraged, still chewing.

“Yeah,” Bruce agreed. “Kept your head down and bowled forward.”

“Those were really rough years because it’s so incredibly hard, you wonder why you’re doing it. Sometimes you’re like, ‘Why am I doing this? What’s wrong with me?’” Hammond observed, possibly still contemplating those questions.

“I was always, I think, very fortunate in that I grew up watching ‘Saturday Night Live.’ That was like the turning point for me,” Bruce noted.

“I grew up as a little kid watching all the comedians on ‘Ed Sullivan’ and ‘Tonight Show’ and stuff like that, and I just used to sit there and think, ‘That’s the greatest job in the world – period! There is nothing better than making people laugh, and when I decided to go into the business, which was the early ‘80s for me, ’81, honestly my only hope was to be able to work in clubs, to actually get paid to do it. I didn’t have any really high aspirations. It’s like anybody else – I would have loved if something majorly successful happened to me, and a lot of very good things have happened to me, but I was just so happy to be in the game.”

“I didn’t think I was going to make it either,” Hammond acknowledged. “I remember when I first started out, I wanted to be on ‘Letterman.’ I remember sitting in Hell’s Kitchen in my apartment in my living room that had a toilet in it…”

“I remember that toilet!” Bruce chimed in, laughing.

“That was in the living room,” Hammond affirmed. “I’m thinking, ‘I’m just not going to make it. I just don’t know what else I can do, though, you know? It’s like, ‘What else am I going to do? I don’t really want to do anything else.’”

“Living in Brooklyn when my first child was born, now all of a sudden I’m faced with, ‘Oh my God, I’m raising a family doing this,’ this constant struggle. During the ‘80s, I don’t know about you, I was averaging about 20 shows a week,” he said to Hammond.

He can be much more selective these days, thankfully, choosing to come to Wilkes-Barre to perform impressions and whatever else the crowd desires fairly often. Hammond attended the announcement last year when Wise Crackers relocated to Mohegan Sun at Pocono Downs and returned to entertain the club in February.

“I love the area. It’s beautiful to look at, for one thing, but the audiences are great because this is America. It’s like Lorne Michaels used to say: ‘We’re not America – America is out there, and that’s where you want to be funny.’ That’s where it counts and it matters. We have to say we’re fortunate that we’ve traveled the whole country – a damn nice country. It really is; it’s beautiful. I had a ball the last time I was here,” Hammond enthused.

“We had a great crowd, and it was just a fun show,” Bruce agreed.

The new season of “SNL” begins on Sept. 27 with host Chris Pratt and musical guest Ariana Grande, so Hammond will likely be busy for a while. Hillary Clinton will also be quite busy as she makes her final decision about running for president, so does that mean that loyal fans will see a reemergence of Hammond’s famous impression of her husband, one that even Bill himself approved of?

“I’m not going to plan that far ahead. Every time I try to live in the future, I get it all confused in my head and frustrated. There’s nothing quite like playing an American president. I mean, really, I don’t know if it gets a lot better than that,” Hammond replied cautiously.

“All those (politicians) were really friendly to me, and I was grateful for it because if they had said boo to me I would have started crying. All of them were nice, in both parties – just as nice as they could be.”

After enduring well-publicized hard times throughout his life, those he mocked on stage validated many of his struggles off stage.

“To hear the president say your name is pretty damn cool. I mean, I graduated with a 2.0, man. I’m not an achiever, but I just had this ability that conducted me into unimaginably high places. You have to pinch yourself once in a while,” he said, smiling.

“Seriously. The White House? Me? Right? I don’t even know what a caucus is. I don’t know what a delegate or nothing is, and I’m in the Oval Office. Whoa. That’s pretty high cotton.”