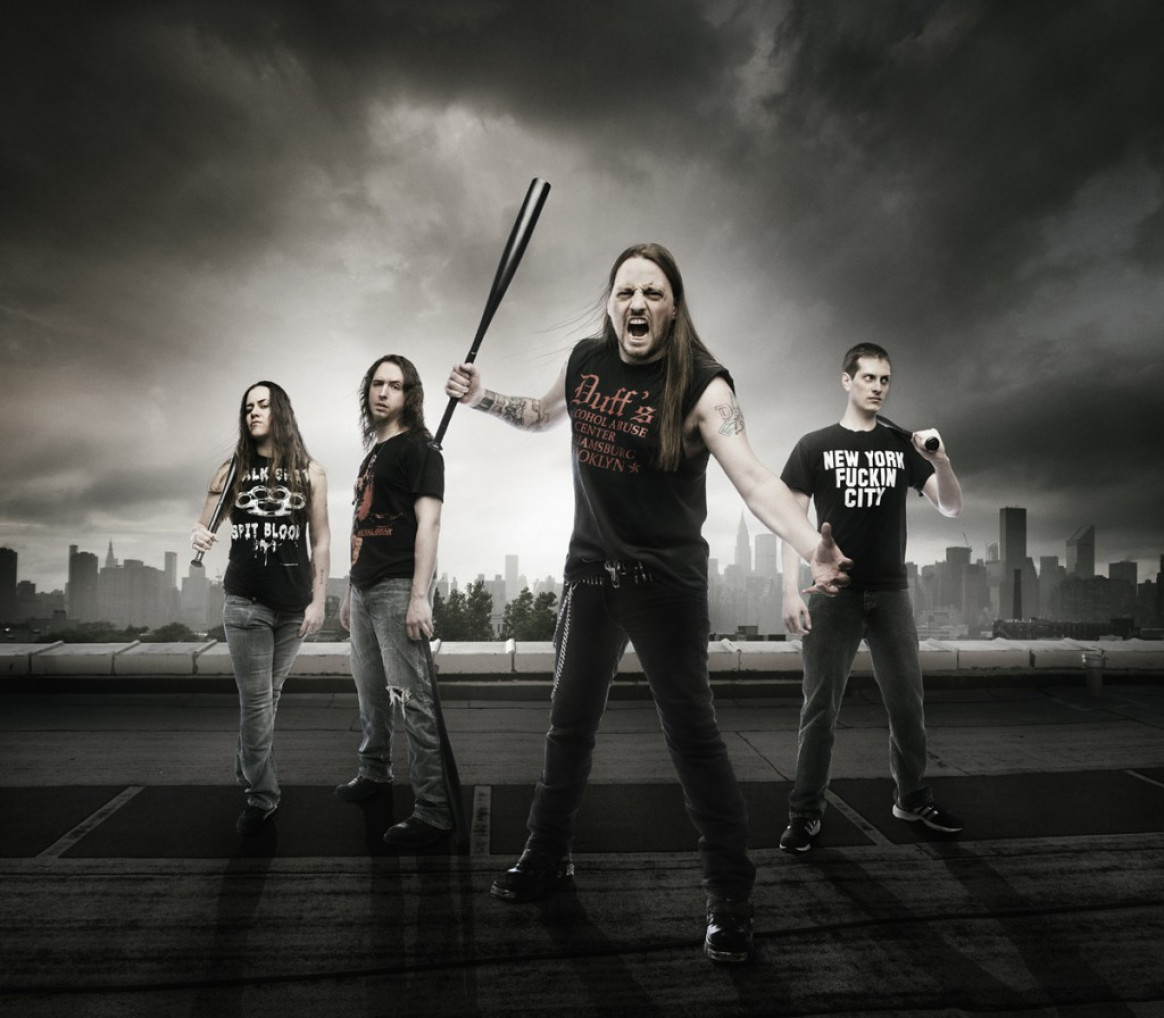 NEPA’s own groove metal mavens Threatpoint play a couple of out-of-town gigs opening for an international touring act, the New York City-based IKILLYA. The two like-minded heavies bond like brothers on the road, leading to IKILLYA – a band currently in a potentially career-making distribution deal with the legendary Megaforce Records and coming off a dream-gig summer package tour that featured bands like Battlecross and Crimson Shadows – extending a hand and coming back to NEPA to play Threatpoint’s CD release party.

Did we mention that IKILLYA was opening for the hometown boys in Threatpoint at the CD release show, happening Oct. 3 at the New Bar on Oak in Pittston?

“The guys in Threatpoint were awesome when we met them,” recalls IKILLYA vocalist Jason Lekberg. “I believe we played with them in Wilmington (Delaware) first.” The two bands first shared the stage at that city’s Mojo 13 club back in April, then again in May at New York City’s prestigious Webster Hall.

Lekberg would know. Having toured hard from Los Angeles to Glasgow, Scotland, his band, which sonically bears the scars of tossing The Haunted and Devildriver into the middle of a hardcore hurricane, seems to breathe highway miles, as they’ve been consistent road dogs since their inception back in 2005. The vocalist sees Threatpoint as a welcome change from some of the bands he’s had the misfortune of playing with during his time in IKILLYA.

“There are those horror stories, though,” Lekberg admits. “Every once in a while, you’ll run into a band that thinks that they kind of run their scene, so they want to act a certain way or request certain things. But overall, generally, musicians are musicians, and everybody wants to be cool.”

IKILLYA has been on quite a journey over the past several years. Lekberg, who is the only remaining founding member of the band, says that IKILLYA went through a very normal growth pattern to get to where it is today. He points out all the usual trials of starting in a local scene, then progressing to playing regionally on a larger scale. He believes the step that comes after this is where most bands logically lose their footing.

“When you go and leave for a month of touring, for six weeks, when you’re starting to put a significant amount of time into it,” he begins, “when you either quit your job or seriously modify the way your earn money outside the band. That’s a position that the lineup that made ‘Recon’ (IKILLYA’s 2011 full-length debut) with me just was not in a position to be able to make that leap. I’ve lived my life focused on this goal, and I didn’t want to give up, and I feel very fortunate to have found the three guys that I’m playing with now.”

Lekberg is confident in the assembled musicians with whom he currently plays – a lineup that is rounded out by drummer Billy Burton, guitarist Eric Jackson, and bassist Rob Broderick. He notes that a part of the band’s past has re-emerged for the band’s latest record, “Vae Victis,” in the re-ranking of guitarist Jackson.

“Eric was actually in the band back in 2006,” Lekberg explains. “He was very young at the time and was just leaving high school. He was kind of in that position where he couldn’t make that level of commitment. He went to college, came back from college, and decided he wanted to go back to playing guitar [laughs]. It all came back around when I was looking to replace the band – it was just a natural fit, because Eric’s a player, and I’m glad to have him back as a part of the band. It’s all love for the other guys, but they couldn’t make the sacrifice to get to this next level.”

A Midwest native, Lekberg moved to New York City in order to pursue his rock ‘n’ roll dreams. He actually became a bona fide part of the music industry via jobs at outlets like Epic Records, where he was responsible for digital marketing of bands like Lamb of God. He points out that if he had to do it all over again, he’d make the move in a heartbeat.

“I probably would have done it 10 years earlier,” he laughs. “I grew up in the Midwest, and my friends and I had this phrase; we called it being ‘white-trashed.’ It was that sense of being where you had a job that’s paying you just barely enough, you get hooked up with a girl, and the two of you are starting to establish a lifestyle. Then, because you’re not really making enough to make forward progress, you kind of end up being stuck in this spot where you can’t get out.”

Lekberg says that he saw so many of his friends become entangled in such a position, and he himself was a victim for years until he was somewhat forced into coherency regarding his musical aspiration.

“It took some pretty catastrophic things,” he remembers. “My band broke up, I got divorced, and I was like, ‘OK, I’m at rock bottom. I’m going to sell everything I don’t need and go take that chance.’ I’d always wanted to get out of Indiana, but it was always a lot of talk – it took those things to make me do it. New York is where I always should have been. It’s where I need to live and, hopefully, die.”

Lekberg does also concur that it’s the city that feeds into his band’s snarling sense of aggression. There’s a tense pulse that runs through IKILLYA’s music, one that is synonymous with the no-nonsense hardcore attitude of the city’s residents. IKILLYA’s music has even been branded by some as “street metal.”

“A lot of my lyrics touch on that,” admits Lekberg of New York City’s hardened edges adding to the volatility of his music. “During the ‘Recon’ timeframe, we were identifying ourselves as ‘New York City Street Metal,’ whatever that meant. It’s just the fact that this city has an intensity that does not let up – there’s an urgency in our music that comes from that. It’s that dog-eat-dog, kill-or-be-killed feel to it.”

Lekberg also says he likes to play with the multicultural aspect of the city within IKILLYA’s music.

“A lot of the music we write, we try to pull from different influences, and different angles from which to approach metal,” he says. “That’s one of my favorite things about the city – I can walk down the street and hear four or five different languages on the same block. I’d go so far as to say that this city is the fifth member of IKILLYA [laughs].”

The fact that IKILLYA has had to kick and claw their way for every break they’ve ever gotten also factors into their sound. The band’s chomping-at-the-bit lifestyle is huge when it comes to the intensity of their music.

“We have to work so much that when we get into the practice room, it’s like, ‘OK, we’ve got three hours, we’re all exhausted, let’s just work really hard,” Lekberg says. “It makes us play faster, it makes us play harder. We’ve always had the joke that if we write an IKILLYA song that doesn’t sound like it’s working, we just have to play it faster – then it works [laughs].”

The band’s current distribution deal with Megaforce Records is a grab and a snag of the brass ring for any metal band. The label has achieved legendary status within the genre in its 30-plus years of existence, having launched the careers of bands like Metallica and Anthrax. Lekberg was a true child of metal, chatting with this writer about the common thread of being a fan of the classic late ‘80s/early ‘90s thrash scene in which Megaforce played such a pivotal role.

“Megaforce was the first label that I ever knew the name of,” Lekberg begins, “just for that reason – they found Metallica. I remember that Metallica had this unauthorized biography out when I was a freshman in high school, and I was fighting to use it as a book report [laughs]. So yeah, Megaforce was always THE label.”

Lekberg says that the way the band came to the attention of Megaforce was much the same way they had interaction with any other label or opportunity that was presented to them. 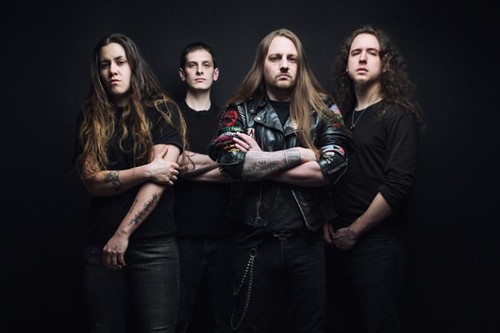 “When we finished ‘Recon’ and ‘Vae Victis,’ we started sending them out to different labels,” he explains. He points out that Megaforce is a very different label now than it was during the golden age of thrash, with founders Jon and Marsha Zazula having since sold the label and the organization morphing into more of a distribution house than a front-facing record label.

“As we were soliciting,” Lekberg elaborates, “Missy (Callazzo, current Megaforce head) was one of the people that came back and said, ‘Hey, would you be interested in a distribution deal?’ That’s very appealing to me personally, only because we get to keep our masters. It’s a very different deal than a traditional record deal – they’re not putting a bunch of money into the band or a whole team behind us. It’s really our responsibility to build that team and the marketing. But, being able to be involved with that label and fly under that banner is an honor.”

As far as Lekberg is concerned, his band is in a great place currently.

“I’m very happy with the progress that we’re making,” he says. “It’s baby steps, absolutely, but to be able to go out and do things like support Battlecross is incredible. I’ve been, unfortunately, playing for 20 years – don’t’ spread that number [laughs], but it’s been a long time. That Battlecross tour was the first tour that I went on where I had a laminate with my name on it – that’s something that was very fulfilling for me after so many years of sweating it out in the trenches. To feel like there’s real progress happening, and just to be out playing live right now, is the most fulfilling thing.”

Lekberg and his bandmates have a hunger that seemingly will not die – a point that he strives to get across to live audiences.

“I get up on stage with these three guys and have them push me as hard as I push them.”

Threatpoint CD release show
with IKILLYA, Psychoprism, Beyond Fallen, and Cause of Affliction
Location: The New Bar on Oak (900 Oak St., Pittston)
Date: Friday, Oct. 3
Time: 9 p.m.
Cost: $5
18+ with adult, 21 to drink. First 50 attendees through the door receive a personal gift. Raffle tickets are $5 or $20 for five chances to win, with 10 prizes in all.