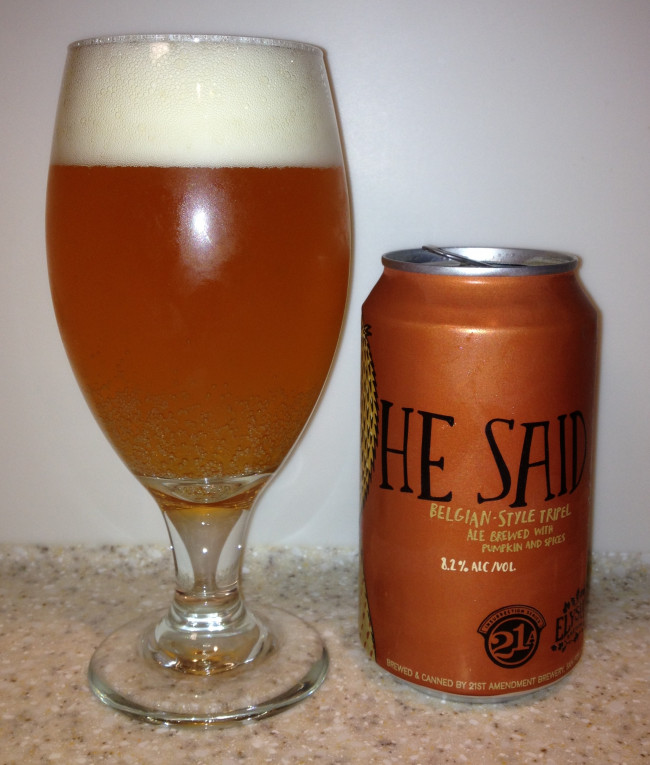 Welcome to the inaugural column of How to Pair Beer with Everything! While the statement may be bold and all-encompassing, the intent of this column, and all going forward, is to help drinkers realize that drinking beer is a truly holistic experience.

For those of us who have been lucky enough to travel, we know that enjoying a beer in its authentic home environment can be far more enjoyable than drinking that same beer at home on our couch. The typical reason being the surrounding environment (sounds, sights, people, smells, etc.), and this is what this column is all about. The goal is to try to create the ideal environment to enjoy good beer.

Keep in mind that these are mere suggestions and are to be taken semi-tongue-in-cheek; however, the intent behind them all is real and genuine. If after reading this column you gain a deeper appreciation for your beer, than I have succeeded. Now, on to the beer!

Description: He Said Tripel pours a slight hazy golden amber with a fluffy white head after a vigorous pour that dissipates quickly, but leaves a nice lacing on the glass. The aroma is wonderfully inviting with a perfect blend of Belgian yeast and pumpkin spices; notes of banana, peach, and pear blend seamlessly with nutmeg, clove, and cinnamon.

The first sip instantly hits the palate and is perfectly matched to the nose. The spices hit up front though aren’t as pronounced as in most pumpkin ales, but certainly bring reminders of pumpkin pie and some lovely crust as well.

Next, the Belgian yeast washes over, leaving behind subtle fruit notes before the pleasantly dry finish. He Said Tripel falls into the medium carbonation range, and the same can be said for the body, making this a beer that can be enjoyed sip after sip. The 8.2 percent ABV is also very well-hidden, with absolutely no alcohol heat coming through at all.

This is an extremely interesting and delicious interpretation of the very popular pumpkin beer style that is all the rage in the fall season and must be tried by all pumpkin beer lovers.

Ideal setting: He Said is a beer that has many Belgian characteristics that require some close attention be paid to them so you do not miss out on the subtle nuances. That being said, this is a beer best enjoyed with fellow beer lovers at a quiet bar or at home during a small get-together with friends indoors or outdoors around a warm campfire. He Said is not a beer that you will want to drink in large quantities, mostly due to the 8.2 percent ABV, so find your favorite place to sit and sip on a great fall beer and enjoy all that this great beer has to offer.

Ideal music: Some relaxing music would be a great fit for this beer, but nothing too relaxing (i.e. no Yanni or John Tesh), but instead indie or folk rock would accompany this beer perfectly and allow you to sooth your thoughts and focus on the delicious flavors locked within. Some great albums to listen to while enjoying He Said are:

Ideal movie: A great pairing with a sipping beer such as this is one is one that requires some attention be paid to it, which is if you are enjoying this beer alone. A great number of films would match nicely with this beer, but films from Ingmar Bergman spring to mind as a great match-up. His look at human life makes for great inner examination, as does this beer. Some specific Bergman films that should be viewed are “Wild Strawberries” and “Winter Light” – both are well-acted, introspective films that work well with a beer of this caliber.

However, if you are enjoying this beer with friends at home, Bergman films may be a bit of a downer, so instead a great horror film is always a solid choice. After all, it is a pumpkin beer! The classics go best with this beer: “Halloween,” “The Fog,” “Dawn of the Dead,” and Lucio Fulci’s masterpiece “The Beyond” are all fine choices to enjoy.

Ideal book: As stated, this is a beer that require sipping and a great deal of attention, so if you are nestling in for the evening and decide to open this beer and a book, which one would best be read while enjoying this beer? Something a bit heady, but not overly intellectual, would make for a great evening in the reclining chair. Perhaps you are experiencing an existential crisis? Well, crack open “The Plague” from Albert Camus or “Fear and Trembling” by Søren Kierkegaard and sit back and truly look inward while the beer helps ease the daily tension.

If you are looking for some deep thought but not too deep, then try “Beer and Philosophy” and read chapters like “Good Beer, or How to Properly Dispute Taste” or “Another Pitcher? On Beer, Friendship, and Character.”

The perfect experience: An ideal experience with He Said Tripel is one in which the senses are all engaged and fully enjoying this highly drinkable beer. An evening spent home by oneself would be made best with instrumental indie or folk rock playing while reading a meditative philosophy book.

However, if you are looking to be a bit more social, He Said Tripel is best enjoyed with like-minded friends in an intimate setting, whether it be a small quiet bar or at a home watching films together. The importance should be focused on spending quality time with one another and the beer.

How to Pair Beer with Everything is a weekly column about stimulating all of the senses through beer. Look for it every Thursday on NEPA Scene.