We’ve heard the stories numerous times. We’ve seen the photos of the ship nestled at the bottom of the ocean, we could recognize the quartet of smoke stacks from miles away, and we have teared up over the final scenes in the film adaptations more times than we’d like to admit.

And yet, we’ve never heard the story of the Titanic quite this way, the way the Pennsylvania Theatre of Performing Arts is bringing it to the area this weekend and next.

“Titanic: The Musical” uses song to propel the story of the ill-fated vessel, and you’ll find no Jack or Rose here; while themes of class and immigration still run through the plot, the characters the audience becomes acquainted with are passengers and crew members that were real people. The show, with a book by Tony winner Peter Stone and music and lyrics by Maury Yeston, has won several Tony Awards, including Best Musical.

“The musical, which predates the Cameron film by almost a year, deals with the real-life figures who were affected by this tragedy,” said the show’s director Paul Winarski, who is also portraying John Jacob Astor, one of the richest men in the United States at the time who was just returning home from a honeymoon in Europe.

“There is no fictional sappy love story to interfere. With the stage show, you do not get a Jack or a Rose; instead you get true-life love stories such as Ida and Isidor Straus, whose five decade- long marriage came to an end along with their lives when neither would leave the other behind.” 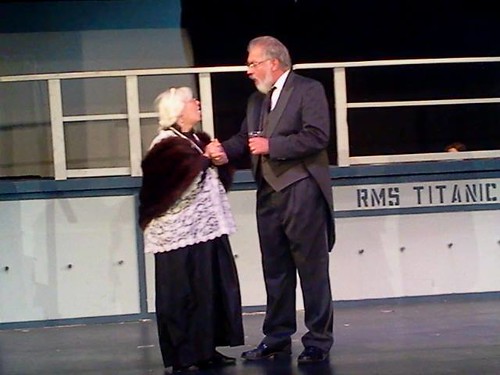 “The play version of ‘Titanic’ is unique in that there really and truly is no ‘main character’ in the piece,” said actor Adam Randis, who portrays J. Bruce Ismay, the owner of the shipping company that built the Titanic, White Star Line. “Peter Stone and Maury Yeston did something very interesting in creating a Robert Altman-like collection of individual stories – they managed to create a narrative that truly lets you feel the scope and the effects of the tragedy on multiple levels, across class, ethnic, and socioeconomic borders.”

Randis makes the point that one could argue the main character of the show is the ship itself. What it represents is what has kept audiences of varying mediums intrigued for decades.

“The play gets it very right in portraying the Titanic as a microcosm for society in the Edwardian period and its tragedy as a watershed moment in history,” Randis said.

“The Titanic represented the ideal of progress – that mankind always attempts to outdo itself and previous generations by making things bigger, better, and faster, and that doing so would ultimately lead to a better world. The wreck of the Titanic and World War I that followed shortly thereafter shattered much of the 19th century’s optimism in humanity invincibly progressing toward a brighter future and cast serious doubts on the hubris and greed that lay behind the monopolistic business practices and massive accumulations of wealth that were the hallmark of the Gilded Age of the Industrial Revolution.

“With all that being said, the Titanic was also a very human tragedy, as over 1,500 people lost their lives – men, women, children, passengers, crew members, people from different countries, different classes – all walks of life. The story of the Titanic continues to fascinate us because it serves as a cautionary tale while also offering a dream of hope for a better tomorrow.”

Watch the original 1997 Broadway press reel for the show here: