Nashville blues rocker Patrick Sweany was the musical guest this year at “The Faces and Voices of The Blues III” on Oct. 4-5, organized and hosted by PocoNotes at the Tripp House in Scranton.

The “soon-to-be-legendary guitar man,” as described by Rolling Stone, performed and held a guitar workshop that weekend. New Jersey photographer William Cregar shot video of Sweany playing “Them Shoes” (seen above) and “Frannie’s Blues” (below), along with a special performance in which Sweany used a Snikle Cigar Box Guitar, a guitar made from an actual cigar box by Clarks Summit resident Dave Whetsell.

The cigar box video also contains a speech by PocoNotes co-founder Dolores Rush Hippler and a raffle held to win a Snikle Cigar Box Guitar. The music starts at 4:45. 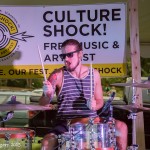