The fun, excitement, and uncertainty of throwing a Pity Party in Scranton

New band, featuring members of A Fire with Friends, The Fox Method, and The Window Shoppers, plays their first show tonight at the Keys 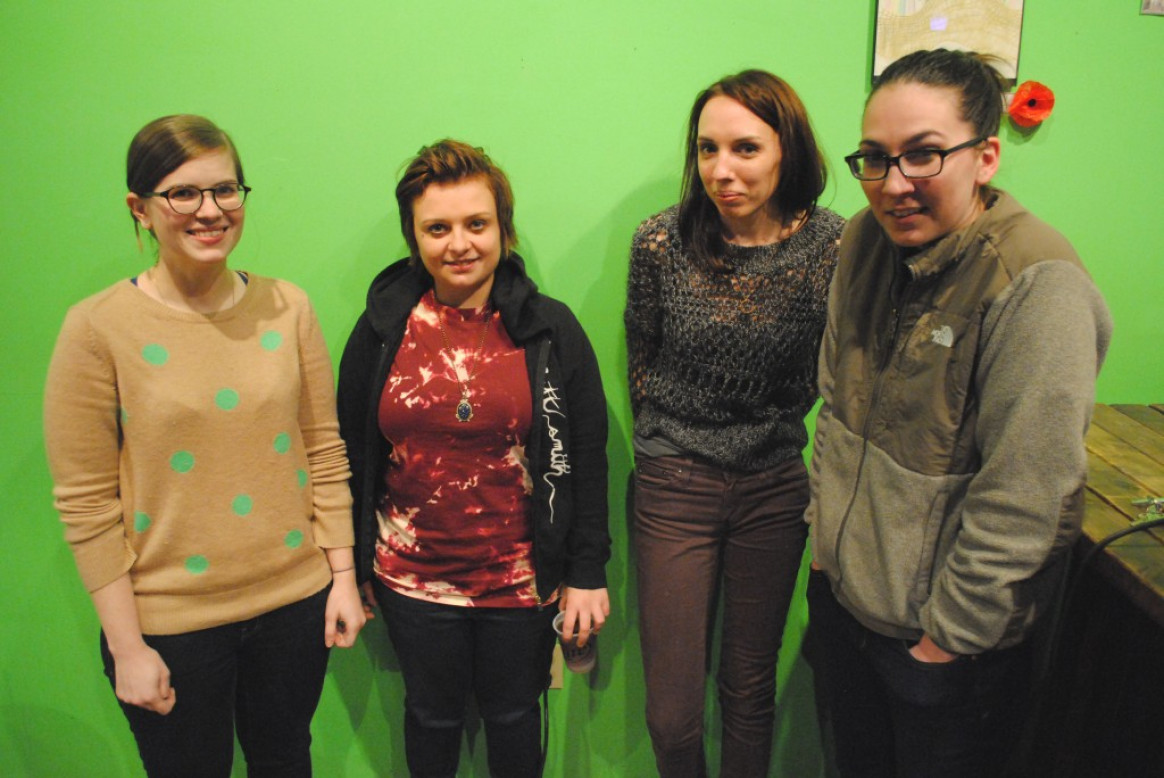 When NEPA Scene first arrives at The Keys in downtown Scranton, the members of Pity Party seem nervous and unsure of us as they practice in the empty bar, the sounds of echoing indie rock enveloping the small but colorful space. We soon learn that this is because it is the first time that anyone, outside of a recording studio, has heard their music before, but once we sat down and started talking about these songs and their impending debut in that same venue, the uncertainty soon gave way to laughter and smiles.

The name Pity Party can be deceiving, as these four young women have been having nothing but a good time since they began jamming in March and April. Bassist Meg Kamosky and guitarist/vocalist Kristen Jordan used to play together in The Fox Method, but hadn’t spoken in years after Jordan moved away. When she returned to the area, Kamosky knew to contact her for this new project with A Fire With Friends’ keyboardist Chelsea Taylor, also on guitar and vocals.

“I heard the music and just fell in love with Chelsea’s writing and her style and all that good stuff. And I met this phenomenal chick,” Jordan said, pointing to drummer Jazmyn Healey, “who said she was a drummer.”

“She didn’t believe that I was actually decent at what I do,” Healey cracked. “I just kind of walked my way into this whole thing.”

“She got along with us great,” Jordan continued. “It was awesome.”

“This is my third girl band, which is so weird. It’s never been my intention, but I just always end up in girl bands,” Kamosky explained with a laugh, holding their first full practice in her bedroom.

“I was in The Window Shoppers for a long time, like I don’t even know how long, like half of my life, I think, and then The Fox Method for a little bit, and then they moved away, so then that ended, and this is the trifecta of girl bands.”

This band, however, was so much easier to participate in than anything they had done previously.

“I never wanted to have a girl band, but it’s the most fun thing. I feel like it’s different playing music with girls, at least for me. It’s so much easier for me to explain my ideas. It’s not even because we’re girls, but just with this group of people, I feel like we’re able to sync,” Taylor noted.

“I think people are excited to hear us because we’ve all been around for a little while doing different things.”

“Before here, I lived in Philly for a good year and a half, and I was in an all-girl band there. We played a million different shows, and within just this past week or two, since we’ve been promoting our show, I’ve had more of a response from us even though we haven’t even played yet, than this other band that I was in, so it’s really cool,” Healey added.

Enthusiasm has been building, with more and more friends and fans curious about their music since they announced their first show a few weeks ago, but for what? What kind of music is it? What do they sound like? Not even the group itself is completely sure yet.

“We always had a lot of discussions about this, because we were like, ‘What the fuck are we sounding like? What do people hear?’ But honestly I think we’re more of a band that sounds like we’re influenced by things and not necessarily a specific person, but a genre,” Jordan began.

“To skim the surface, I’d say an indie or alternative rock, if we had to say something,” Healey defined. “We weren’t set out to be a specific thing, ever.”

“Little bitches? Speak for yourself!” Healey objected. “Elliott Smith was a big one for us,” she offered, pulling up her sleeve to reveal her Smith tattoo.

“We all listen to all different types of music, but then we have some similarities,” Taylor clarified.

“I think we all grew up listening to ‘90s bands and musicians, so that probably subconsciously influences how you write and how you play.”

Perhaps they’re better defined by what they are not, which is just another all-girl band for show. Kamosky is particularly tired of those stereotypes.

“I have a very dominant strut, so nobody fucks with me,” Jordan joked.

“It’s not even that,” Kamosky replied. “Just people look at me and they’re just like, ‘Oh, she’s holding that for her boyfriend.’ No, actually, he does not know what way a guitar goes.”

Though their gender can work in their favor as well.

“People are shocked for some odd reason, but then they’re also super intrigued,” Healey noted.

“There’s definitely more than an eyebrow raised. ‘You guys all play?’ But then you play a song and they’re like, ‘Holy shit, you guys did that?’” Jordan described.

“I’m interested to see what people think because, for me, it’s the first time that anyone sees exactly what we’re doing, and I feel like that’s very exciting.”

Hanging out with cool people

Pity Party’s music has formed as naturally as the group itself, with six songs prepared for their set at The Keys on Friday, Nov. 14, and several already recorded at JL Studios for an EP due out by the end of the year.

“It’s not scary to introduce something to these people because, besides Meg, nobody judges me,” Jordan said. “No, I’m totally kidding.

“I genuinely do pull stories from my life situations or stories that I’ve heard from other people. Like I wrote a song called ‘Dentist,’ and it’s literally about the fucking dentist ruining my day. But sometimes I’m very literal, and sometimes I’m not so much. I’m Southern, so I grew up on a lot of bluegrass, country, that kind of stuff, so I like the stories behind songs. I think I kind of incorporate that into ours.”

“From what I know of you, your lyrics represent your life in a lot of ways,” Healey agreed.

“I definitely wear my heart on my sleeve, although it doesn’t seem that way,” Jordan admitted, her Alabama accent nonexistent in her voice. “I very much do.”

“You can definitely tell what songs are Kristen’s songs and what songs are my songs just by the song titles. Kristen writes really beautiful things, and I just write, ‘Fuck You,’ ‘Getting High,’ and ‘Taco Bell,’” Taylor listed with a laugh.

“We have very different styles, but we’re very straight to the point. We don’t like bullshit,” Jordan offered.

“I like being kind of tongue-in-cheek, too. I like writing. I’ve always kept a diary my whole life,” Taylor said.

“I don’t know if my songs come across how they’re always supposed to come across, but to me, they come across tongue-in-cheek or quirky, when really you can interpret it for what it is or not.”

“My thing with Chelsea when I first heard her songs is, circling back to the Elliot Smith thing, they’re very raw and they’re very real,” Healey added.

“They’re not happy, but not in a way that you don’t like. They’re extremely relatable to a lot of times in my life.”

They choose one song in particular, “Gold,” to play exclusively for NEPA Scene, a track that has yet to be recorded officially:

“To kind of sum it up, somebody tries to change you, whether it’s a position you’re in work-wise, relationship-wise, whatever it is. You’re in a great place and those people kind of try to taint you or change you or make you into something they want, which is not necessarily a positive thing,” Jordan said of her inspiration for “Gold.”

“That’s one thing that I’ve learned in my life – negative people, just cut them out really quick. I kind of have a bad rep for that, but I don’t really care. That’s why I’m hanging out with cool people now.”

She’s referring to her bandmates, of course, but the same can be said of the local music scene, embracing them before they’ve even played a note publicly.

“We’ve had a lot of support now that we’re kind of coming out of the closet and talking about it and promoting the show. I think that really says something about Scranton, just that people in general are excited about something new. I don’t think that this would happen anywhere else, or even like five years ago in Scranton,” Taylor pointed out, complimenting Friday’s supporting acts – Eww Yaboo, Esta Coda, and A Social State.

“It’s a really cool scene in Scranton. We wouldn’t have found each other if there weren’t supportive places to go together and play together and practice together.”

Although, with the exception of Healey, they all concede that they’re quite nervous to let the world in on their best-kept secret.

“I took off work on Friday to just throw up all day,” Taylor acknowledged jokingly. “I’m not nervous, but I feel like I’m going to forget everything.”

“It’s going to be great!” Healey enthused, brushing their nerves aside.

“We’re going to jump up and down a whole bunch of times before we go on, and then we’re all going to take a shot, and then it’s going to be amazing!

“I’m in love with all of these girls.”

The feeling is obviously mutual as the jokes and accolades continue among the girls, and Jordan, truthfully, is just excited to hear what people have to say – “good, bad, ugly, or whatever.”

“If I see people swaying, I’ll be really happy. You don’t necessarily have to relate to the lyrics, I think, if they enjoy the sound and just kind of feel our presence there. This is going to sound so lame, but with the four of us, chemistry-wise, it’s there. I think we just naturally form these beautiful sounds, and I’m really stoked about it, and I hope that everybody else is. That’s really my big thing,” she emphasized.

“It’s going to be so weird to share it with everyone,” Kamosky concluded.

“I’m excited about it, but it’s so fucking weird.”