Named after their sixth studio album, Linkin Park has announced “The Hunting Party Tour,” an early 2015 winter trek with Rise Against and Of Mice & Men.

The California nu metal band is still going strong, releasing one of the year’s bestselling albums on June 13. Rise Against and Of Mice & Men also have albums from earlier this year to support – “The Black Market” and “Restoring Force,” respectively. For NEPA fans, the tour will hit the Giant Center in Hershey; Albany and Brooklyn, New York; and Atlantic City, New Jersey in January.

“Rock music was born in these towns, and for some reason these places tend to get overlooked much more than they should. We want our fans there to know how much they matter to us,” vocalist Chester Bennington said of the cities they chose in a press release.

Linkin Park, Rise Against, and Of Mice & Men tour dates: 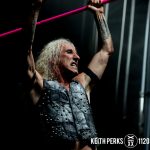