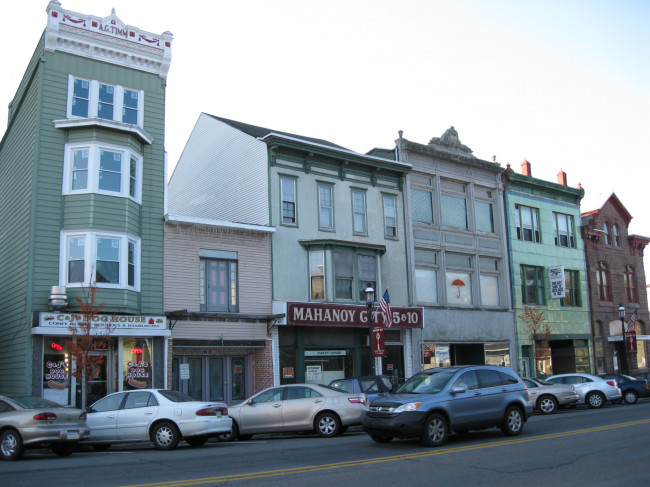 When I look upon the magnificence of the Scranton Cultural Center or the majesty of the Nicholson Bridge, I wonder how the generation that created such wonders in the first part of the 20th century could also create some of the dumbest, most asinine, ball-busting houses ever made.

I become bewildered at how an American society with such architectural visionaries could allow some of their contemporaries – mere baboons with hammers – to construct homes with Hobbit hole basements, 22-inch doorways, or 6-foot tall bedrooms with tiny square cutouts in their cranium-crunching ceilings as the means to enter the “attic.”

Why did they make portals and hallways more narrow than the bulky furniture of their time? Why did they not dig out their basements so one could stand in them? What is the logic of having an opened front door block the stairway leading to the second floor? These questions are not rhetorical. I have sought answers, only to be told over and over again, “Well, that’s the way they did it back then.”

Between 1900 and 1935, there were a handful of innovative geniuses who designed and constructed a variety of modern wonders. Likewise, there was a population of jealous, underachieving carpenters, who, rather than accepting their own inadequacy, decided to show those “pompous engineers” that they too could be the bee’s knees and build their own structures. However, to further extend the victory of mediocrity over excellence, these rejects did it wrong.

Right… but I digress.

All auctioneers encounter some level of architectural hardship each time we go out on an estate pick-up, but there’s always one house that tops the list as worst on record. For us at Savo Auctioneers, the worst of the worst was crowned in October 2006 in Mahanoy City, Pennsylvania.

Situated in Schuylkill County, Mahanoy City was at the center of the anthracite coal industry in the early 1900s. It’s famous for its goings-on with the Molly Maguires, and apparently, in 1948, it was the first town in America to have cable television. What Wikipedia doesn’t mention is that the business district and residential areas exist almost entirely as row houses. Structure upon structure, home upon home standing against each other… touching… so close together that a flea couldn’t squeeze its ass between them… and some of these buildings are simply crumbling.

So it was with the estate that we entered in October 2006. The stone steps that led up to it were worn and beaten. All three floors were a disaster. The house had been empty since 1993 and perhaps never cleaned during its century of existence. Parts of the structure had simply disappeared, as on the third floor where there was a man-sized hole in one of the bedroom walls that broke through into the neighboring home. Had the dust mites not been holding hands so tightly, this house would have simply collapsed upon itself. Indeed, as we worked and walked through, especially when moving from story to story, chunks of plaster let go of their weakened hold and came raining down upon us.

These aspects of filth and dilapidation I have found in dozens upon dozens of estates. What made this Mahanoy mess the worst of the worst was its size. Despite its three tall stories, the home was a mere 15 feet wide. The stairwells were 24 inches wide. When climbing from the first to the second floor, there was no landing, no platform. No. We simply squeezed through a hole in the ceiling. It was the equivalent of using a ladder to get through an empty slot in a drop ceiling. Most of the furniture made it through this opening by a hair’s breadth. One wardrobe was not so fortunate; it became stuck and we had to all but jump on it to get it downstairs.

The only easy time we had during this six-hour adventure was when we managed to maneuver the items outside. From the porch to the gate of the cube truck, we had improvised a gangplank. Before that, each piece of furniture had to be turned, twisted, inverted, and folded in half every time one was moved down some steps or through a doorway. Truly, the adverse architecture doubled the loading time.

When telling people about this pick-up, a comment is sometimes made about how much easier it would have been if we had a shrink ray. Here’s the crux about a shrink ray: even if one was invented, how would it really help me? Think about it. A shrink ray would condense or make smaller the molecules of an object. However, smaller size doesn’t mean less weight, because although a shrink ray would reduce an object’s size, it would not reduce its mass. Being the amount of matter in a defined space, mass determines weight according to the pull of gravity. Hence, an object weighing 100 pounds that is the size of a sofa shrunk down to the size of a bar of soap would still weigh 100 pounds.

To me, this would make it more difficult to move. So if anyone out there is trying to invent a shrink ray, I suggest you abandon that project and work instead towards a viable matter-energy transport system, like what they had on “Star Trek.”

More on that later…