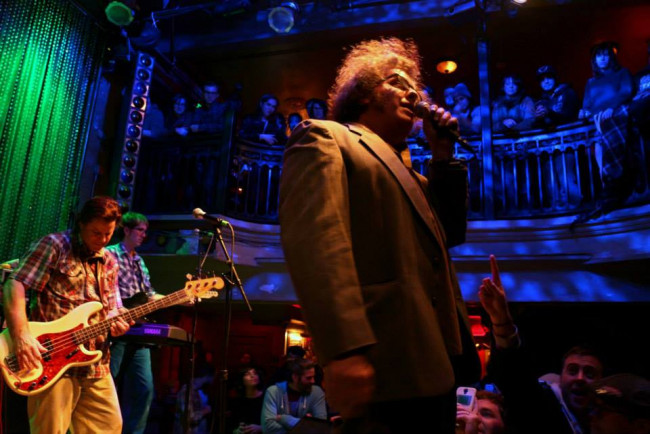 There’s a strange kind of magic that happens when a band that existed solely in the realm of one of your favorite childhood shows appears as a real, viable touring act for the first time 20 years later.

Wave after wave of nostalgia filled the space inside Johnny Brenda’s (1201 Frankford Ave., Philadelphia) on Friday, Nov. 28 as a sold-out crowd enjoyed reliving some of the memories associated with the offbeat, now-cult hit Nickelodeon program “The Adventures of Pete and Pete.” Those memories came flooding back thanks largely to the music of Polaris.

It turns out you can go back to Wellsville.

To properly review a show for a band that technically never existing until a few years ago, a history lesson of sorts is in order.

Originally formed solely for the purpose of creating music for the series, Polaris only existed in the realm of the fictional town where evil bowling balls caused sibling rivalry, the worst playground injury one could suffer was a dreaded paper cut, and you wouldn’t be expelled for covering your principal in creamed corn. The band was comprised of Miracle Legion members Mark Mulcahy (vocals/guitar), Scott Boutier (drums), and Dave McCaffrey (bass) – performing as Muggy, Harris, and Jersey Polaris, respectively.

The trio created the iconic theme song for the show, “Hey Sandy,” whose third lyric is still widely debated among fans. I’m sad to report that I still don’t know if Muggy says, “Can you settle a sure bet?” or something more sinister.

After the show ended in 1996, little was done with the music from “Pete and Pete” until it was released in 1999 by Mulcahy’s Mezzotint label. Even less was done until the group performed its first live show in August 2012. The “Waiting For October” tour, named after one of Polaris’ 12 original songs, was announced on Aug. 26, 2014 and included nine shows. The live tour also included the addition of guitarist and backup vocalist Henning Ohlenbusch, performing as Penny Polaris.

“This one was sold out for months,” Mulcahy told the packed house in Philadelphia on Friday, where they followed opening act Radiator Hospital. “You guys were the smart ones.”

The tour-ending performance in Baltimore the following night still had tickets available at the door, so he wasn’t kidding about being fortunate.

With little introduction, as if any was needed, Polaris quickly launched their set with “Baby Tae Kwon Do,” one of two brand new singles that was released Oct. 7 on their Bandcamp page. From there, the setlist included the songs that many were most familiar with as music behind the end credits of one of Nickelodeon’s finest offerings of the 1990s.

But time changes all things, including how you interpret lyrics you’ve heard a thousand times before.
Mulcahy and company smoothly rolled through “She Is Staggering,” a song that could just as easily fit into the short list of wedding songs for a starry-eyed kid of the ‘90s as it could an emotional scene between Big Pete Wrigley and Ellen Hickle. The slower, swaying tune did anything but dampen the energy in the room.

After swimming through the sunshine of “Saturnine,” Polaris played the first of several Miracle Legion songs to appear Friday night when they delivered “Snacks and Candy” before bringing down the mood with the somber “Everywhere.”

“I put your photograph away. I can’t look at you today. I put your letters upstairs, but it’s no good because you’re everywhere,” Mulcahy crooned from the front of the stage sans guitar but +1 harmonica, backed by the lucky ticket owners crowded in front of the stage and those lined along Brenda’s second floor balcony.

That song, in particular, carries so much more weight than my 9-year-old self could ever comprehend. Perhaps that’s why the music, much like the show, has become timeless. Polaris was writing music that, looking back, fit just as perfectly for college-age fans of Miracle Legion as it did for establishing mood and tone in a kids’ TV program.

Take “Waiting for October,” for example. The song was written by Mulcahy in response to failed predictions by Dami Mission founder Lee Jang Rim that the rapture would begin on Oct. 28, 1992. The rapture, he believed, would be followed by seven years of war, famine, and more that would result in the second coming of Jesus Christ in 1999. Remember the Polaris line, “It all ends in 1999 and commences on the 28th?” It makes much more sense knowing the meaning of the song, but it’s not exactly the kind of thing you’d imagine being written for a children’s show now, is it?

Eight songs into the set, Mulcahy finally rolled into “Hey Sandy” after performing the other side of the October 2014 cassingle, “Great Big Happy Green Moonface.” The widely recognized three chord intro delighted fans, even as Mulcahy launched into an impromptu, spoken word-like bridge that further expanded on the line, “Does your dog bite? Hey Sandy.” Muggy shrieked and yelped between lines, asking about how friendly the fictional Sandy’s dog was, shouting things like, “Oh, he’s a good boy!” and adding a new element to a song released 21 years ago.

Mulcahy was comfortable and often playful with the audience, quipping lines like “This next song is based on a true story,” but never delivering the story itself until explaining the history behind “Waiting for October.” Before beginning the jangly, moody “As Usual,” complete with its wonderful wandering bass line, he told audience members that, “You can sing along if you want to. It’s a good song.”

After several more Miracle Legion favorites, the main set ended perfectly and fluidly with a four-song epic that began with a cover of R.E.M.’s “Man on the Moon,” which Mulcahy dedicated to “the great Michael Stipe.” Stipe, as many “Pete and Pete” fans know, played fictional ice cream man Captain Scrummy in the “Pete and Pete” episode “What We Did on our Summer Vacation,” perhaps the greatest 22 minutes of children’s programming ever created thanks to the line, “You look like a bona fide sludgesicle man.”

Mulcahy then paused to relive the origins of “Summerbaby,” discussing the band’s only physical appearance in an episode entitled “Hard Day’s Pete.” Little Pete discovers the trio performing the tune in a garage (or “gararge,” if you’re from Maine, as Mulcahy pointed out) and goes on a quest to discover the song and how to perform it himself. He forms The Blowholes, a band including bassist Ms. Fingerwood (Syd Straw), drummer Clem “Muttonchop” Lanell (Aaron Schwartz), and meter man and lead guitarist “Lightning” Mel Rattner (Marshall Crenshaw).

From “Summerbaby,” Polaris transitioned quickly into “The Monster’s Loose,” and closed with Miracle Legion’s “Closer to the Wall,” providing a set that could have easily earned the approval of Inspector 34.

The band didn’t disappoint when they returned for a four-song encore that included the surprisingly fitting “Sesame Street” tune “I Don’t Want to Live on the Moon,” a cover of John Cooper Clarke‘s “A Heart Disease Called Love,” their own “Recently,” and the Miracle Legion hit “The Backyard.”

Ending the evening with a song that included the lyrics, “The world was so big and I was so small, and your voice was always the loudest of all,” topped an evening overflowing with nostalgia and, for some, a longing for better days long since passed.

Polaris, much like Mr. Tastee, drove into the sunset following Saturday’s show in Baltimore, only to live on as a memory until next April when four tour dates bring them to the West Coast. They won’t be back this way until May 15, 2015 with a performance at the Highline Ballroom in New York City and May 16 at Philly’s Underground Arts.