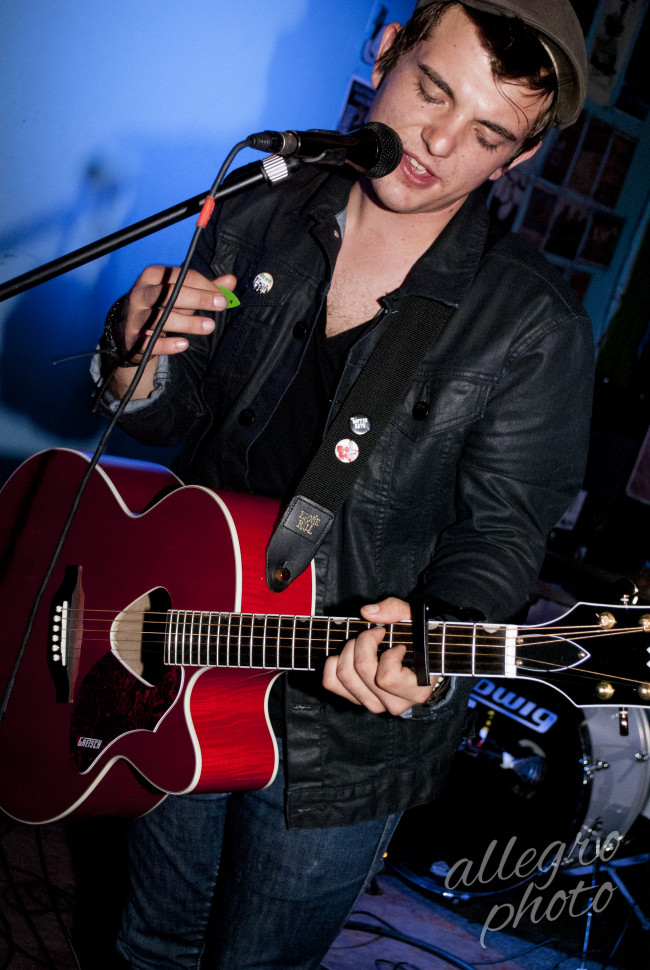 Mixing the atmospheric, sonic vitality of Taking Back Sunday and The Used, with a light-touch, straight-outta-1995 Matthew Sweet sentimentality and proto-punk inner child, Wilkes-Barre’s Down to Six kick out their jams with dynamics out the wazoo and more hooks than a professional angler’s convention.

In short, this is a band never lacking in excitement or new musical thought patterns once the page is turned. 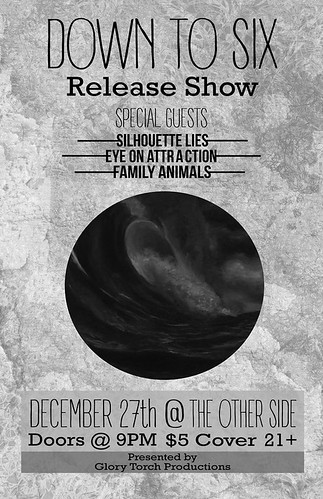 “The original idea of the band was all about being loud and saying the most you could in the smallest amount of time,” offers Down to Six vocalist/guitarist John Novak at the onset of an interview covering the band’s brief, yet inspired history. “We were basically a heavy punk rock influenced band.”

Down to Six, after a scattering of EPs since their 2010 inception, will release their debut full-length album, “Atlantic,” on Dec. 27 at a show at The Other Side in Wilkes-Barre with Silhouette Lies, Family Animals, and Eye on Attraction. For Novak, the album marks a definitive step forward in the band’s aural presentation.

“I still try to keep that mentality,” Novak says of the band’s ragged-edged foundations, “but, as a writer, I’ve started to get bored with the same old four-chord tunes with little dynamics. I’ve always had an end goal of sorts, but the other three guys in the band really bring the dream together. The ambient side started to show its face when dynamics and feeling came more into play than the aggressive side.”

The new “Atlantic” record was not met without its fair share of uncertainty, as the lead-up and process that was the recording and inception of the album brought with it shifts in member location, and even lineup changes. For Novak, though, it was seemingly in his blood to keep his head down and push forward with his ideals regarding Down to Six.

“When we started the basic tracks for the record, we were all in one place,” explains Novak. “But as the recording went on, [drummer] Bill Gerrity went back to school in Boston, [guitarist] Joe Wilga moved to New York City with his brother, and [bassist] Nick Blockus was back and forth between here and Florida.”

Recorded between August and November of 2014 at SI Studios in Old Forge under the tutelage of renowned local audiosmiths Tom Borthwick and Joe “Wiggy” Wegleski, Novak recalls a band with a great headspace at the time, even if each member wasn’t able to be physically present at all sessions.

“Tom and Wiggy have the greatest souls,” Novak says. “They tried any and every idea we had and were super responsive throughout the whole project. It’s a real trip – you see this old firehouse in the middle of Old Forge and wouldn’t think, ‘Man, I bet there’s a Neve console in there!’ Most of the mixing was just done with Wiggy and myself. It was a little weird at times, feeling like, ‘Hmm, I wonder what the guys will think of this mix.’”

The change in lineup was met with equal positivity and galvanization.

“It was a new start for me,” says Novak of the new personnel. “Prior to this, we were always a trio: bass, drums, and guitar. We’ve gone through lineup changes before, which mostly meant finding a new bassist. But this time around, I realized that sometimes if you want to make the most of something you love, you have to take a few chances.”

Novak knew Joe Wilga from other bands he’s played in, like Lost Continents and Skip Town Matty, and was impressed with Wilga as a musician.

“He can go from beautiful to chaotic in the blink of an eye,” Novak boasts of his guitarist. “We talked about him playing second guitar in the band previously, but it never happened. Eventually one day he hit me up and mentioned he was still interested in it; we met up and talked it over and decided he would be a great fit.”

As far as drummers go, Novak eventually stumbled upon the band’s current timekeeper during a period of downtime leading up to the new album.

“We were sort of out of commission at the time and in a period of reforming,” he explains. “I had a few drummers lined up to take the place of longtime drummer Cody Klein when Joe mentioned that his drummer from Lost Continents might be interested in playing also. We went and jammed with Bill one day, and it was a no-brainer. He’s a powerhouse drummer and a great guy. With the addition of ex-bassist Nick Blockus, we finally found a dynamic that covers all that the tunes call for.”

Novak elaborates on what makes this current lineup of the band noteworthy.

“I’m super proud of the new lineup,” he says. “The second guitar widens the writing horizon, while Bill’s drumming adds finesse and power. Nick covers the low end and harmonies live. I’m still the constant on vocals and guitar, but it’s a whole new vibe with the new band.”

If “Atlantic” is any indication, Down to Six is now a band firing on all cylinders – and that’s totally by design. Novak says this is one of the biggest steps forward in the band’s four-plus years of activity.

“This record is the first time we really thought about putting something together that’s cohesive,” he admits. “It’s also the first time that we put real time into making a record that sounds impressive. In the past, we’ve done an EP or two that were recorded by friends or at small, low-budget studios, but this time around, we wanted something more. In past incarnations of the band, we were trying to figure out what we were or where we’re trying to go, but now we’re more focused.”

Novak and Down to Six are also out to have a little fun while flexing their creative muscles and continuing with their ear-pleasing display of nonconformity.

“I want to show people that it’s not rocket science to be in a band, and that you don’t have to fit a mold or follow the pack to make music,” he says. “Be creative, try something different, do what you love, and have fun with some friends. If you have a melody, write it; it’s all about vibes.”

Novak loves how the power of music can do everything from write away the past to tell a story to convey feelings that words alone simply can’t accomplish.

“It’s not about how much money you can make or how many likes you can get on your band page,” he feels. “Yeah, it’s fun and a great perk, but I think a lot of bands get lost in that. Do what you love first and foremost. When I write, I take a lot from what surrounds me: this area, the mindset, the yearning for something more, and the motivation to get out there and find it. Sometimes I write to put things to rest, sometimes I write to tell a story, and sometimes I write to feel at ease. But anything can be inspiring if it strikes you the right way.”

We know what to expect from the band on record, but what about the live stage?

“Live, we still keep the dynamic of previous lineups, but with a much more levelheaded demeanor,” Novak answers. “Sometimes, I get awkward and crack bad dad jokes, but mostly we just play loud and can’t get enough of it. There’s nothing that makes me feel more alive than playing with this band.”

With the release of “Atlantic,” Down to Six is chomping at the bit to hit that stage hard.

“I’ve been waiting for this record release show since August,” reveals Novak. “It’s always in the back of my mind. I just seriously can’t wait to play a show with some super close friends in bands that we’ve known since the earliest shows and put our hearts into it.”

The band is also looking for that next memorable gig, as they’ve already got a few under their belt.

“We got to open for the River City Rebels once, who were one of my favorite bands to catch growing up,” Novak lists when posed with the question of favorite gigs thus far. “We also broke up the band for the first time officially mid-set at a Culture Shock gig. It might have been the biggest ‘Replacements’ moment we’ve ever had as a band!”

The wild ride that Down to Six has endured over the last half-decade is something that, seemingly, Novak wouldn’t trade for anything.

“Although we’ve had plenty of ups and downs, I’m proud of what this band is growing into,” he happily tells. “We have a group of people who keep us going and friends that we could never live without. If I knew where we would be as a band today when we first played a show back in 2010, I wouldn’t believe it. We’ve been through some crazy times, but that’s what keeps you on your toes and always growing.

“I know the lineup now is the lineup and can’t wait to see the ride it takes us on. No matter how close or far.”