“It was a lot of trial and error,” says Queens, New York-based vocalist Kore Rozzik of the stage persona that has become the identifiable face of his band bearing the same name.

“Kore Rozzik has been an idea for many years. As I found myself through my young adult years, the character developed.”

Rozzik and band will appear along with NEPA favorites Cause of Affliction and Last of Nine this Friday night at Ole Tyme Charley’s in Plains. For Rozzik, whose band’s image and sound evokes both the best of a wonderfully bastardized hard rock past – including the Sunset Strip glam of early Mötley Crüe and the nu-metal, industrial slant of Dope – and the easily digestible Active Rock-formatted tinge of bands like Three Days Grace, it’s only been in the past few years that the band has been vying for serious credibility with audiences. 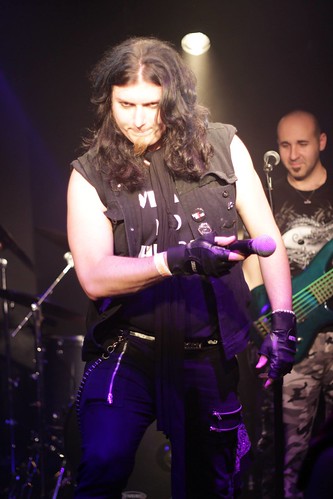 “We’ve been through different band lineups, different songs, different producers and managers,” Rozzik admits. “The first real version of the band was formed in late 2009. We didn’t start consistently showing face in the NYC scene until 2011.”

The current incarnation of the band, which consists of Rozzik on lead vocals, Karlo Soldevilla and J-Kidd on guitars, Freezes on bass, and drummer Roach, makes for a visually striking, stage-posturing throwback to when true “rock stars” roamed the stage. This seems to be the definitive troupe for Rozzik, pointing out the individual talents and strengths.

“In the very beginning, it was hard to get good, serious musicians to work with me,” the vocalist says. “As time went on, it just got better and better. I would say the lineup for the past year has been the best so far. Our rhythm section is very accomplished, and we also have talented guitar players. I knew things were clicking come 2013 when the responses from the crowds was stronger. These were audiences that had never heard of us before. That’s when you know it’s working.”

The band is currently working on its debut EP, produced by Paul Bento, building upon the original tracks, which were produced by Andre “Virus” Karkos of Dope/Device fame. Rozzik is confident that the new material will present the best of what the band is about, musically, while simultaneously revealing a progression in their sound.

“At that point when the original tracks were done, the band didn’t really exist,” recalls Rozzik. “It was just myself and Freeze.

“Lately, though, working with Paul Bento has been a pleasure. He is really one of those hidden gems of our industry. He worked with so many people from the ‘early ‘90’s Brooklyn scene’ that went on to do big things such as Type O Negative, Whiplash, and Biohazard. He is multi-talented in the realm of music and production, and has been very supportive in seeing my vision through while helping shape it in a professional manner. I think the EP will be mine and his best work to date.”

A quick visit to the band’s ReverbNation page will reveal songs that may possibly be included on the upcoming EP. One such track, the driving, aggressively melodic “Kill the Clown,” can trace its roots to the earliest days of Rozzik’s eponymous persona.

“Being a self-trained musician, I started playing guitar and writing songs at an early age, so I have my own formula,” Rozzik explains. “‘Kill The Clown’ was really the first ‘Kore Rozzik’ song. It was basically the introduction or ‘coming out’ song. Previously, I had always been in a band with a moniker.”

It was inevitable that this song from the past helped bring Rozzik firmly into the now.

“So this was the ‘Here I am, fuck the past” song,” he notes. “I very much enjoy all styles of hard rock and metal, past and present. We truly embrace and mix this into our sound. I would say that’s a great description because the song is one of its own – many people hear multiple and or different influences when listening, which is cool. Kore Rozzik doesn’t just sound like Band A. I love the ‘80s glam metal and thrash metal as well as all the modern-day metal bands, plus the early 2000s nu-metal bands. There’s no one dimension with Kore Rozzik.”

Furthermore, in what turned out to be a fitting bookend to a certain era in the band’s history, Rozzik actually did have the opportunity for the music’s original set of ears to check out what the guys have been up to lately.

“We got to open up for Virus’s band Dope,” Rozzik says, “which was great because he got to see the progression of this band in person. It was very rewarding to get his seal of approval.”
Upon the EP’s eventual 2015 release, the band plans to set itself apart from the pack as far as presentation is concerned. Rozzik plays to the 21st century digital world while keeping one foot firmly planted in an era when music had more of a direct connection with fans.

“We are striving to make a difference in the current market,” Rozzik stresses. “We may market each song with a respective video and release it with that strategy. The digital age has affected us a lot. Back when people still bought CDs, it was something tangible – you could hold it, look at the cover and liner notes. It just meant more. Even though it’s so easy to just download something now, I still think music will always have a place in the world.”

Opening up for Dope was just one of many prime slots the band has been rewarded with lately. Driven by a dynamic stage show, Rozzik’s gospel has been spreading among more established draws.

“Doing Steel Panther’s first-ever NYC sold-out show was a treat after having done a quick appearance onstage with them in Vegas,” Rozzik lists among his favorite live moments.

“Also, doing a song with Bobaflex, which is one of my favorite bands right now. It’s been great becoming friends with them. Opening up for Fozzy [the band fronted by WWE superstar Chris Jericho] was a blast. Not just being a wrestling fan myself, but their crowd ‘got’ what we do. That’s the main goal – to tour and grow a fan base, being able to do this on more of a full-time level.”

So what does the band’s NYC home base offer in terms of audiences and venues for Kore Rozzik, and what does he think the band can offer to NEPA crowds?

“The NYC market is very interesting,” the vocalist responds, “with a lot of competition and high rents. There is a lot of ticket selling. With so many bands doing multiple shows on the same nights, it does sometimes create a varied draw.” 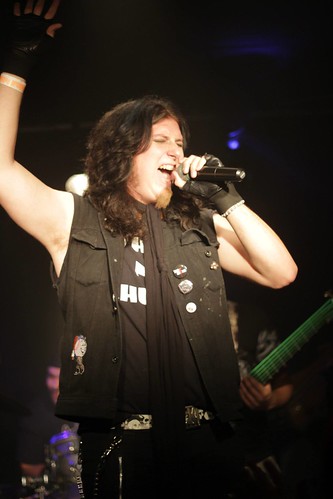 Rozzik has created an event dubbed “Korefest” to counterbalance this variance.

“‘Korefest’ as a way to make my presence known,” he explains. “Penned the bastard child of NYC, Kore Rozzik is in fact, such. We are the other white meat. We are recognizable, but we are the other guys in the scene. We kind of do our own thing, and in a way, that makes us special. So far, the NEPA scene has been very open to suggestion with Kore Rozzik. Numerous bands, radio DJs, and promoters have been quick to lend a hand or give information to their market. It’s very humbling and encouraging. We look forward to contributing entertainment to this region and beyond!”

We know that Kore Rozzik is much more than the influence of one particular musical era or pinned down to any defined subgenre. This begs the question, “How do you categorize this band?”

“I really don’t know if you can specifically label Kore Rozzik,” the vocalist answers. “Many people will pass the quick judgment based on my appearance and say we are glam metal. My appearance and performance is very much based on guys like David Lee Roth and Alice Cooper. However, musically, we cover so many subgenres and time periods that it depends on what song you pick. We have a lot of groove and sing-along aspects as well as thrashy, straight-ahead parts.”

Rozzik does not hesitate to say what an audience will see in a performance from his band – this is no collection of amateurs dancing upon a shaky footing.

“Energy, passion, love, hate,” he lists when going over what fuels his performances, and what he feeds to the audience. “Motivation that people can accomplish anything they want to.”

Defiant with a likeable cocky swagger, Rozzik wasn’t quite finished pulling that train of thought into the station.

“There’s also the confidence,” he continues. “I know that I am not just another unsigned singer. My performances, even on a low budget, are worth every dollar a patron pays for. We know we are putting on something special that is very close to be on par, if not surpassing, many national acts. Once we have access to a larger market and audience, it’s global domination.”