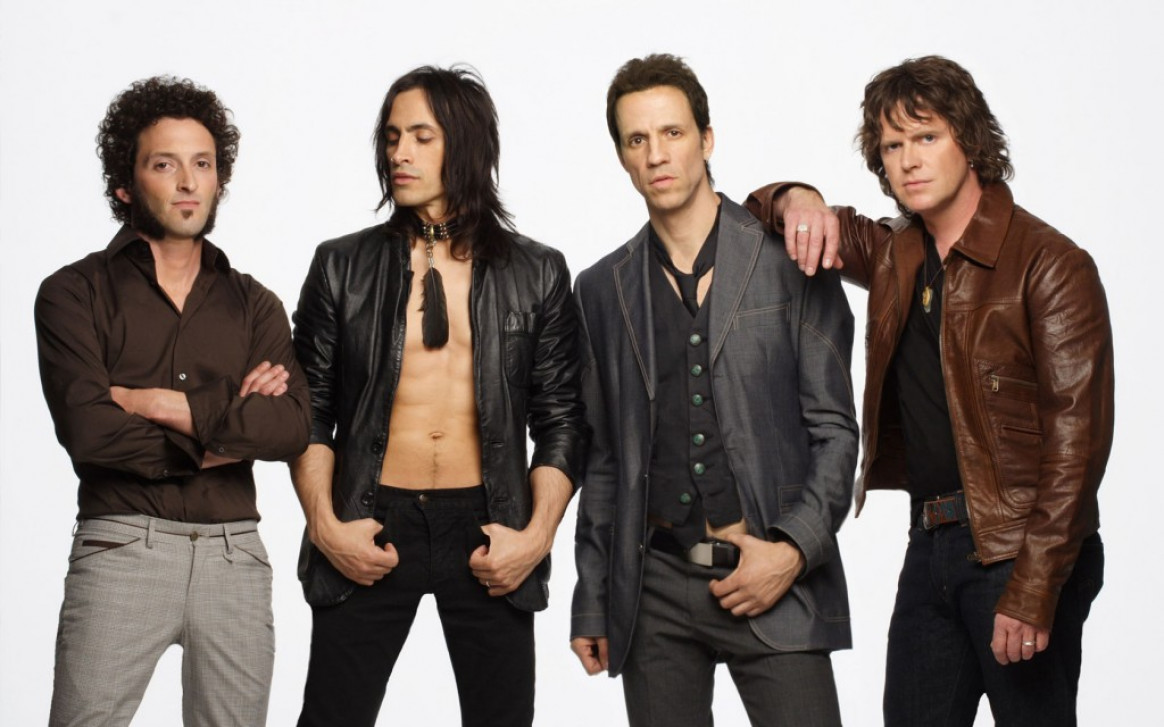 It’s hard to believe it’s been 25 years since the release of Extreme’s seminal hard rock opus, “Extreme II: Pornograffitti.” The record, which sold in excess of two million copies and spawned a pair of Billboard Top 5 singles – the acoustic stomper “Hole Hearted” and the sparse, lip-quivering duet “More Than Words” (the latter of which hit the No. 1 spot) – that put the band on the map at the tail end of the “hair metal” era, a lumping to which Extreme was a cut above, musically.

To celebrate the quarter-century anniversary of the album, the Boston-bred band has embarked on the “Pornograffitti Live” tour, on which they’ll play the album in its entirety, along with assorted gems from their other four studio releases. Now consisting of original members in vocalist Gary Cherone, guitarist Nuno Bettencourt, bassist Pat Badger, and current drummer Kevin Figueiredo (“Pornograffitti” era drummer Paul Geary departed upon the band’s first hiatus in 2006), the tour will include a stop at Penn’s Peak in Jim Thorpe on Thursday, Jan. 22 and The Space at Westbury in Westbury, New York on Saturday, Jan. 24 as part of a string of dates that will take the band to the end of the month before another run starts up in April.

NEPA Scene had the chance to speak with Gary Cherone by phone from his Massachusetts home shortly before the start of the tour to chat about the glory days that followed “Pornograffitti’s” release back in 1990, the chemistry that forged the band’s success, and the inner-workings that became the album itself. According to Cherone, “Pornograffitti” was an album that seemed chomping at the bit to be recorded.

“The first record was supposed to come out in 1988,” recalls Cherone of Extreme’s eventual March 1989-released eponymous debut. “It was delayed almost a year. Just due to that fact alone, we were writing the second record. When the first record did come out, we felt, as writers and performers, that we were past that record. On that first record, you could really hear our influences of Aerosmith, Van Halen, Queen – but “Pornograffitti” was the record where we really found our identity.”

Cherone recalls playing clubs in support of the debut record while writing “Pornograffitti” cuts like “Get the Funk Out” and “Decadence Dance.”

“We were ready to record that second record,” he emphasizes. “By the time we got in to do ‘Pornograffitti,’ we were a well-oiled machine. For me, like I said, that was the record where we really found who we were, so the difference between those two records is big.”

One of the real turning points in Extreme’s sound came within the production and arrangements that “Pornograffitti” featured. The album was a larger-than-life soundscape of vocal harmonies, big guitars, incessant grooves, and songwriting that took on a much larger scope than anything on the band’s debut album. One might wonder as to the possibility of any difficulties in committing such a huge swath of sound to tape.

“Were we better at recording than on the first album? Yes,” offers Cherone. “We got some of the bugs out of the system going into the record. It was trying to recreate it live, trying to capture it. Some of the production things at the time – the doubling up of the vocals, doing group harmonies and stuff like that – we did a lot more of that on the first record. We kept it a little more pure on ‘Pornograffitti.’”

Cherone adds that for all the sonic excess happening on “Pornograffitti,” the sound was initiated simply by the makeup of the band.

“The point/counterpoint, some of the call-and-responses with the vocals – that’s the stuff we were honing in the clubs for years,” he says.

As far as record label involvement during the conception of “Pornograffitti,” Cherone notes that there was not that level of interference felt by many other bands of their ilk at the time.

“We were fortunate,” he tells. “The first record had done pretty well – 300,000 copies, video on ‘Headbangers Ball,’ so it wasn’t a ‘success’ success, but it was enough for them to invest in a second record. But, the making of ‘Pornograffitti,’ I remember having a few conversations with the record company about putting out a concept record, having a dinner with the A&R guy, trying to convince him of the storyline. I brought up songs like ‘When I First Kissed You,’ and him saying that it shouldn’t be on the record, that it was too eclectic and should be a B-side. They thought we were crazy, but they were supportive. To this day, the band is pretty pig-headed as far as recording what we want to record [laughs].”

Any conversation about the “Pornograffitti” album must include at least a passing reference to the big hit, “More Than Words” – a track that, while quite different from the band’s heavy funk sound, was nonetheless integral to their success and future name recognition. The question of whether the band felt this delicately acoustic, Beatle-esque ballad initially had a chance to become a hit is posed to Cherone.

“You never know,” he responds. “When we wrote the song, we thought it was a good song, better than some others we wrote. It always got a good reaction in the clubs on the tour for the first record when we played it. The funny thing is, ‘Pornograffitti’ was dead in the water nine months after it was released. We did a couple of club tours, we released ‘Decadence Dance,’ we released ‘Get the Funk Out,’ and we didn’t gain any traction. Nine months after the album, we were beginning to write for ‘III Sides.’”

“III Sides to Every Story” was Extreme’s third album, released in 1992. Cherone notes that there was a bit of frustration within the band’s camp just prior to “More Than Words” breaking big.

“We were kind of depressed,” he admits. “We were in Europe doing a club tour, and we were ready to do our third record. A radio station in Denver started playing ‘More Than Words’ and it dominoed – it just blew up. We ended up touring ‘PPornograffitti’ for the next year. To this day, the success of that song blows the band away. It really gave us the freedom to do what we wanted to do after that.”

Cherone does say that “More Than Words” led to a crisis of identity among the listening public at large, many of whom had no idea of the band’s “other” sound.

“We released ‘More Than Words,’ then ‘Hole Hearted,’ and after that, there was a perception problem with Extreme,” he says. “Those two songs were so huge that we were perceived as an acoustic band. At the time, it was a blessing and a curse. Looking back on it now, we consider it a blessing. Back when the songs were successful, it was frustrating – granted, we got some rock tours, but we were an eclectic band; we never quite fit in.”

Speaking of never quite fitting in, Extreme was undeniably a part of the late ‘80s/early ‘90s hard rock scene, but the band’s sound was just a step ahead of the norm. Like other acts of the time, such as Saigon Kick, Extreme didn’t conform to the standard “girls and cars” thematics so many of their contemporaries mined for platinum.

“Without sounding arrogant, I did think we were doing something new, or we wouldn’t have done it,” Cherone says. “We didn’t want to be a rehash of our influences. We thought we were breaking new ground; we were excited about some of that music – ‘III Sides’ was very ambitious. We were in the moment – we weren’t looking objectively at it like we do now in hindsight. Bands, like you said, Saigon Kick, King’s X, some of those outlier bands – they took their influences and made it their own. We took risks, just going with our muse.”

So how has the philosophy that went into the “Pornograffitti” experience been carried by the members of the band into their future projects, say Cherone’s eventual replacement of Sammy Hagar in Van Halen for a record, or guitarist Nuno Bettencourt’s current gig as sideman for Rihanna?

“That’s a question probably better answered by the people around us,” Cherone responds. “I probably don’t think of it much, other than the history that Extreme’s had, the success, the highs and lows, just being older and taking that into new projects. You try not to make the same mistakes, but what ends up happening is that you make new mistakes [laughs]. That’s just about the art – Extreme’s going in to work on new music after this tour. Collectively, we have the same experience, so will we make those same mistakes? No. Will we tread on new ground? Yes. You want to keep it honest, keep it passionate – the egos are left at the door. We know what the band is, and we appreciate what we are.”

To that end, Cherone feels that he can enjoy the processes that make up the band these days – something that he wasn’t exactly known to do back in the early ‘90s.

“You can smell the roses a little more now,” he says. “Back in the day, Nuno and I thought we could change the world with the next song. To their credit, Pat and Paul enjoyed the moment more than Nuno and I did. Now, looking back, touring Europe, playing Russia and China for the first time, we’re enjoying the experience. Does that sound like older and wiser? Maybe.”

As for the more intimate process of songwriting collaboration with Bettencourt, does Cherone still find that successful commonality with his bandmate that spawned the big hits?

“Well, if you asked him, he’s say. ‘I’m an asshole and he’s an asshole,’” Cherone laughs. “It’s funny, when we got together for ‘Suadades’ [Extreme’s 2008 studio album “Suadades de Rock”] and we were writing the first couple songs for that, I remember Nuno saying, ‘We can still write songs.’ I said, ‘I never doubted it.’ But you do have those doubts, like getting back together with an old girlfriend; you wonder if you’ll have that magic again. With Extreme, at this point, we’re fortunate that the stars aligned, and there is that magic – on stage, and with the songwriting as well. We’re lucky to have that.”

In the end, Cherone seems content with the fact that “Pornograffitti” has held up well against the test of time – something that can’t be said of many records released in 1990.

“For those songs to hold up, it’s a great feeling,” he says. “This tour is making us appreciate the record even more because we haven’t played those songs in 20 years. We found ourselves laughing after the show because we enjoyed playing some of those songs like ‘Money’ [‘Money (In God We Trust)’] or ‘Suzie’ [‘Suzie (Wants Her All Day What)’]. Some of those riffs Nuno played are insane – like the song ‘Pornograffitti.’

It’s not even a question – coming back to Extreme is the mothership.”