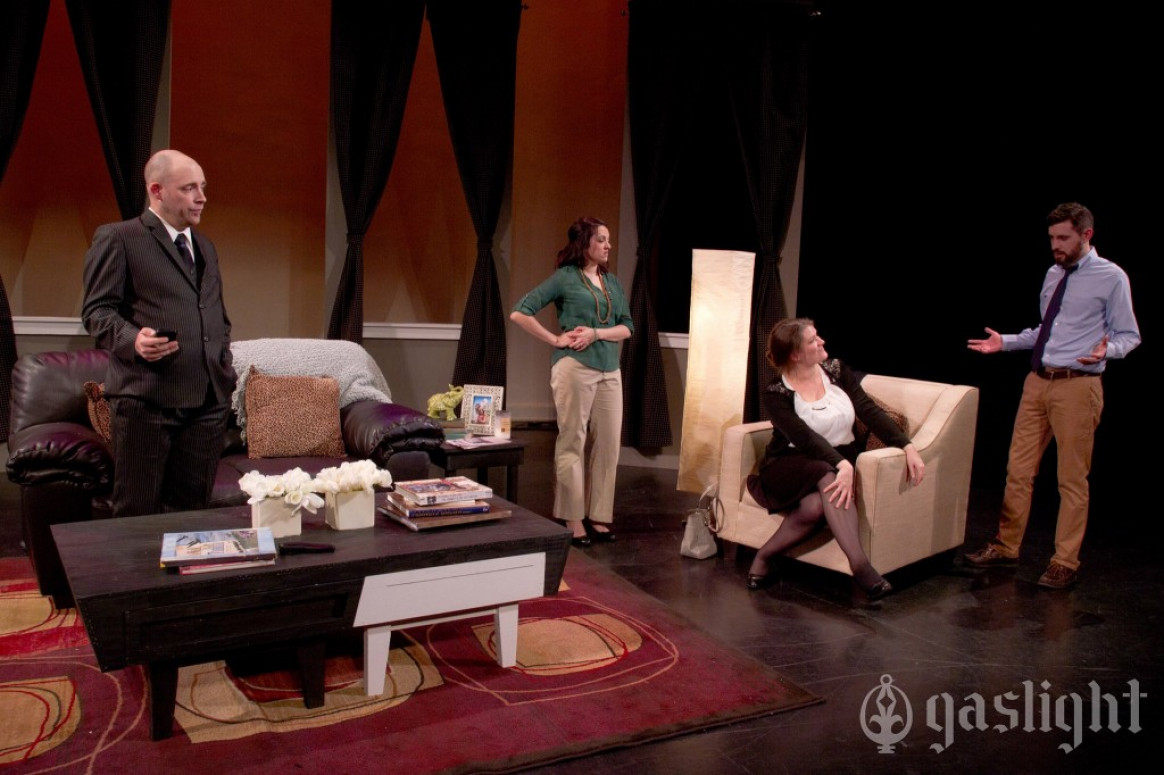 We are a culture that loves to take a look into the lives of others – a glance at a Facebook news feed or a tabloid magazine cover will tell you as much. It only makes sense, then, that the latest production from the Gaslight Theatre Company, “God of Carnage,” may be simple on the surface, but is wrought with relatable, accessible themes for any audience member, even if they don’t identify with one character in particular.

“God of Carnage” is a one-act, one-scene, four-cast member show that takes place in a living room in Brooklyn, New York. Annette and Alan Raleigh (Lydia Traill and Sean McKeown) meet at the home of Veronica and Michael Novak (Kimmie Leff and McDermott) to discuss a fight between their two sons.
It seems like an event not worthy of noting, but it quickly spirals into a fast-paced, humorous scene that digs into the realms of parenting and relationships.

“Carnage” is a relatively new piece or work, written in 2006 and on Broadway as recently as 2009. It’s a regional premiere at The Theater at Lackawanna College in Scranton and one that director Brandi George is excited about.

“Gaslight has the opportunity to take a brand new play that was well-received in London and New York with, in my opinion, a really strong cast. It’s going to be a great production. It’s fast-paced, fun, and accessible.”

In speaking with the cast about the show, it’s obvious that each member is lively in their own right – there’s no shortage of jokes or laughter – and this perfectly feeds into the characters they have to play, all of which are a handful in their own way.

“Oh, she is unfortunate,” Traill emphasized when talking about Annette. “She’s really highly strung – like painfully highly strung – and she’s stuck in this terrible situation where she’s both embarrassed and angry and has no way out. All of her well-brought-up tendencies are struggling against this really awkward, painful situation, so things go a little haywire for her.”

Traill felt Annette’s anxiety even before hitting the stage.

“The first couple times we read through the play, I found my hands hurt because I guess I was clenching my fists so much.”

“She is very different than myself,” Leff said of Veronica. “She’s very opinionated, and she’ll say what she thinks. She’s one of those women that takes the saying, ‘It takes a village to raise a child,’ to heart, and she’ll make up for that whole village.

“She knows she comes on too strong and she’ll apologize for that, but not for what she believes.”

McKeown’s character Alan, who is the father of the bully in the story, is pretty much over it.

“He doesn’t want to be there, he doesn’t feel like he has the time to dedicate to this, to what he refers to as his ‘responsible parent routine.’ He thinks kids should solve it between each other. He’s sort of put out by being there. And he’s the dominant one on our family’s side, in fighting with Veronica.”

McDermott’s character Michael is all too agreeable.

“He’s definitely a people pleaser,” McDermott said. “He doesn’t want to make waves; he’d rather go along with what everyone else is saying and put everything behind him. He obviously cares about his son, but he doesn’t want confrontation. He’d rather be done with it, and that attitude gets him in trouble throughout the course of the show.”

“He’s dynamic,” George added. “He definitely has all these layers to him that work themselves out over the course of the play.” 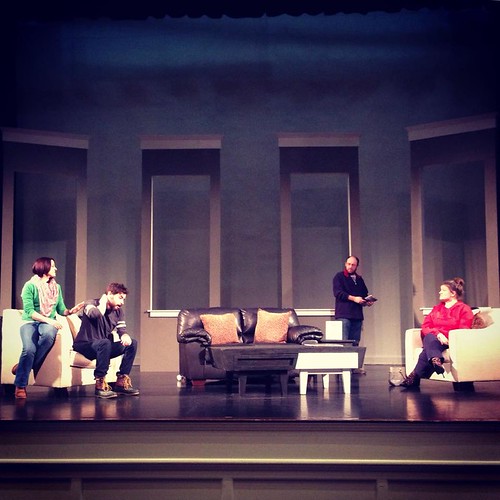 However, others’ intentions and true natures are not as cloaked.

“Some characters’ tendencies are surface-level – you can see right away their motives and what games they’re playing. But others, like Michael, it comes out more as the couples talk, as they get into parenting styles, relationships, even personal things in their lives. We start to see the true sides of these people.”

Though you wouldn’t know it by just looking at the cast, you also get to see a set of people who are tackling these characters from a unique perspective – that of people who have no children of their own.
McDermott chuckled when asked if he were a father, therefore having a great source of inspiration for the part.

“No one in the cast – myself included or our stage manager – none of us have children, so it’s interesting to come at this with the perspective of young adults, but not necessarily parents,” George said.

Though many other facets of life are touched upon throughout, parenting and just how to do it is a prevalent discussion. Traill looks at the show as addressing a hot button surrounding parenting right now.

“[The couples] try so hard at the beginning of the play to be so respectful of that social assumption, that parenting other people’s families is completely off-limits, but in some ways, you can’t live like that because families are going to intersect.