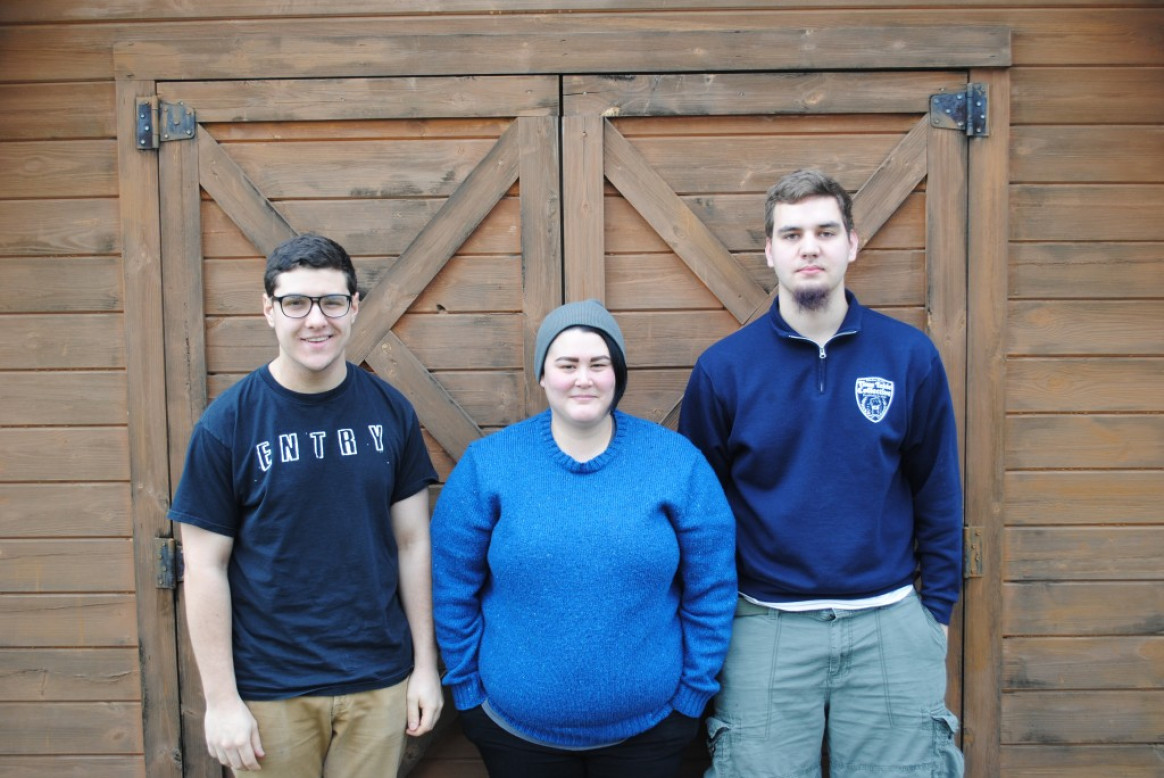 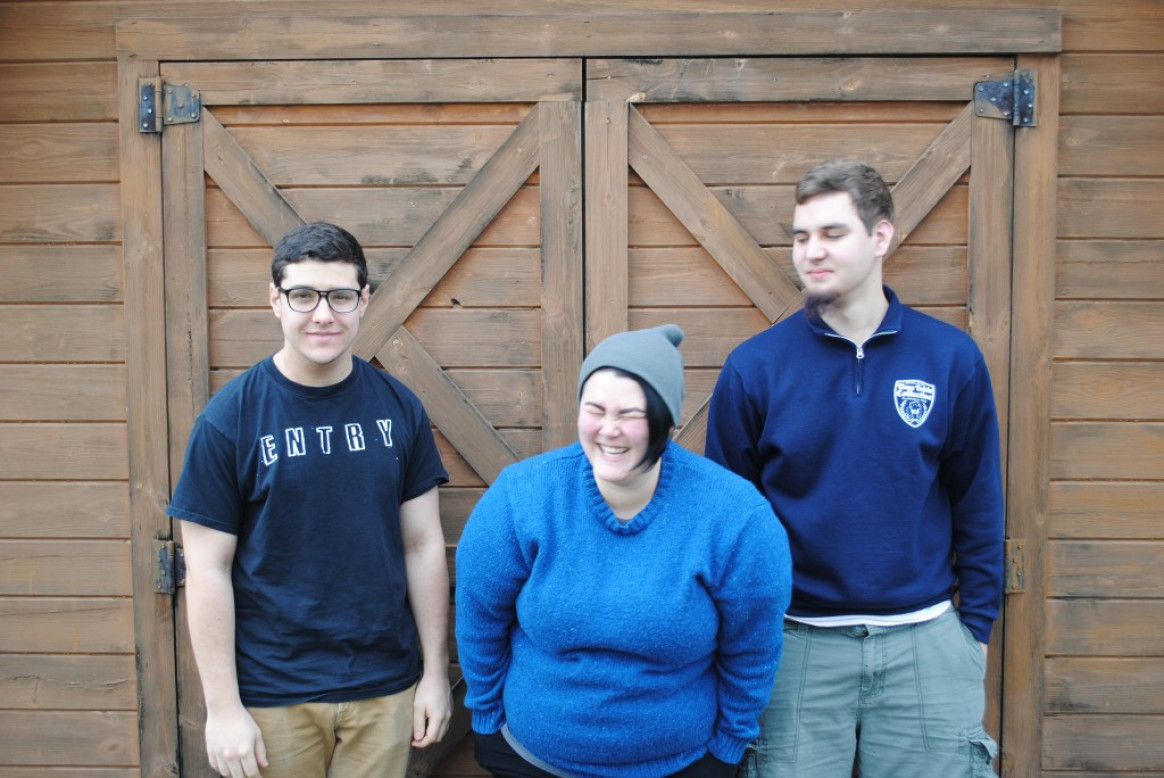 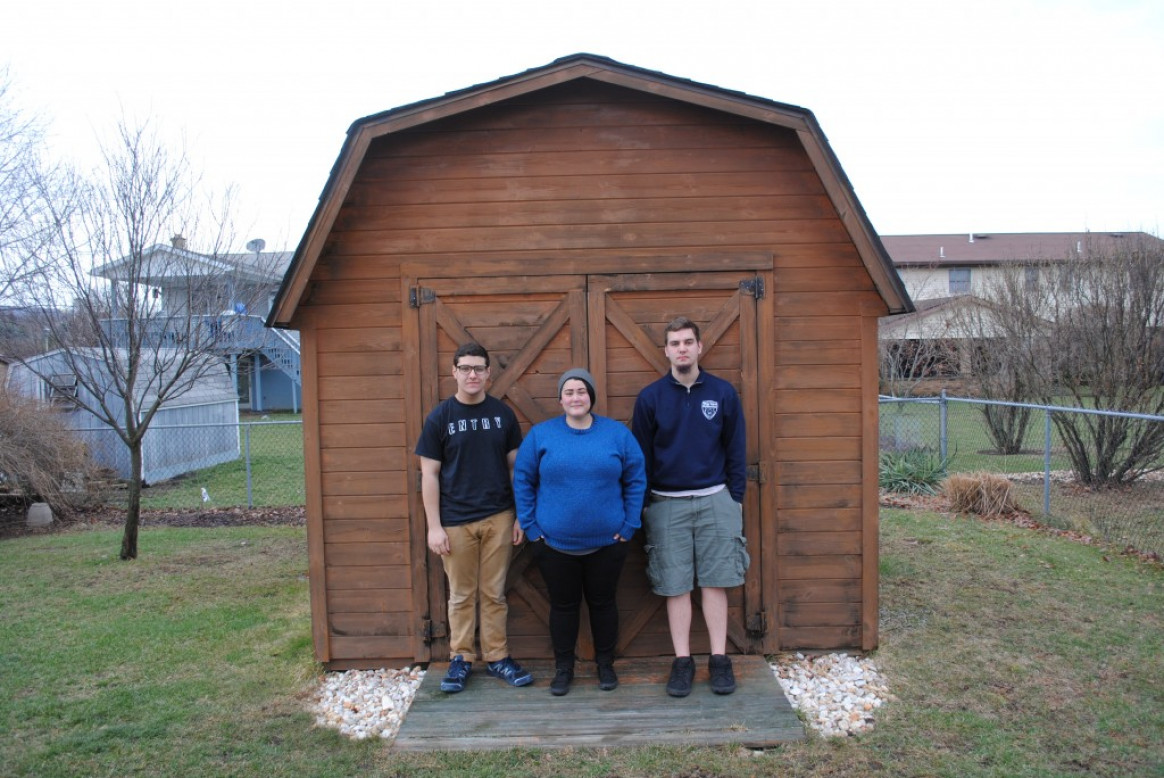 Louisa only formed in October, and already the band has three dedicated members, eight heartfelt songs, a recording through their own label on the horizon, and their first official show with a solid lineup this Sunday.

Their biggest challenge at the moment, really, is getting people to say their damn name correctly. It’s pronounced “low-wise-a,” for the record.

It’s guitarist and lead vocalist Amanda Dittmar’s middle name, which is fitting because the lyrics are simply her on paper – the type one would find torn and stashed away in a bedside drawer. Punk rock poetry at its finest.

“All of our songs are if you took my journal and ripped out a page from it; lyrically, that’s basically what it is. I can’t write in metaphors. I’m very direct. I’m a very direct person, so I kind of just say what I’m feeling, what happened,” she explained.

“They’re all sad. They’re depressing songs. Some of them are upbeat…”

The band itself is the fun part; its origins were not.

“Right before I quit my previous job, I was super depressed. I was getting sick from stress, and I picked up my roommate’s guitar, learned two or three chords, I think, and wrote my first song that we play; it’s called ‘Alone.’ And then from there I just kept going, and I learned more chords, and then I wrote a couple more songs,” Dittmar recalled.

“I practice every day for like an hour, at least. I just started playing what sounded good to me and built on that.”

It sounded good to Washington and drummer/backing vocalist Derek Jolley as well, both members of Social Loafers and Ticket to Ride, among other bands that are very different from Louisa. Dittmar had played in the concert and marching bands in high school, but prior to three months ago, she had never even picked up a guitar. The passion was there, however, as anyone could see.

Washington is a man of few words, but he affirms without hesitation what made him join the trio.

“Seeing her play guitar – and her voice is amazing.”

Meeting NEPA Scene for their first interview ever on Sunday, Jan. 4 in Jolley’s finished basement in Larksville, where they practice every week, they discussed their deeply personal songs, varying levels of musical experience and anxiety, and the young scene that has brought them all together.

The walls are lined with worn posters and other remnants of bands past. Jolley runs up and down the stairs and back and forth across the room, in the midst of finalizing details of a show he’s producing that night. As an active musician and owner of the Time Table Records Collective, one more project would seem like a burden to most, but for him, it’s just helping a friend in need.

“Amanda is a really close friend of mine; I wanted to help her out with that. … I’m not particularly a drummer, but playing in this band has been a lot of fun,” Jolley emphasized.

“I guess my other attraction to this band is I like to play indie music. I like to hang out on the soft side. I listen to a lot of hardcore, and I grew up in Wilkes-Barre listening to hardcore, but at the same time, I have such a soft spot for Tigers Jaw and indie music in general.”

Washington handles the technical end of things for Time Table and was just hanging around when the opportunity presented itself.

“I was just here and their bass player flaked out that day. I just picked up a bass and just started jamming,” he said.

“I haven’t played bass in a band in like three or four years, so it’s definitely different for me. I started playing with my fingers again, so they’re killing me right now.”

Dittmar is known best in the area for her photography, so she was shooting underground DIY shows when she ran into Jolley at a show he organized behind a Currys Donuts. In the old days, Cafe Metro in downtown Wilkes-Barre would have gladly hosted a show like that, but those days are long gone as a new generation of young musicians struggle to find venues to play.

Jolley studied European theory and piano from about the age of 5, attending shows by sixth or seventh grade with the older kids at the Metro or Backstage Enterprises in Kingston and discovered his favorite band, The Menzingers, completely by accident.

“I got into guitar only after meeting my friend Nate, and we started bands and it just took off from there. It was always just enthusiasm. What we lacked in skill we made up for in enthusiasm. We got made fun of a lot in school, but that’s OK because at least we were making a little bit of a ruckus. It was a good time. We played a lot of shows in garages,” he remembered.

Washington, who started playing viola in fifth grade and moved onto violin and upright bass before teaching himself guitar and drums, has been there with Jolley since those humble beginnings, and the Time Table family of bands has created a burgeoning scene that Dittmar was quickly accepted into despite being seven years older than her bandmates – she’s 26.

It’s the emotions shared that have made them a tightknit group – “They’re like the brothers I never had.”

“It’s been very therapeutic. Our songs touch on things like parental relationships; there’s a song about my dad who has been a deadbeat my whole life. One of our songs that we play is about coming out as gay to my mom, and that didn’t go over well at first. Another song’s about a friend who killed herself when I was in college. Other songs are about relationships,” Dittmar shared.

“It’s like free therapy. You don’t have to pay for a therapist. You write a song and then it’s out there and you feel better. Maybe somebody will connect with it. If not, I’m just telling my life story to the world.”

“I’ve noticed that Amanda’s lyric writing style is very direct, whereas I write in metaphors with my other project. She’s extremely direct, and I think that is going to add to people’s understanding of the music. But it’s our job as the rhythm section to support that because we understand the emotion in the song. We’ve connected on that level, but I think that directness is going to be really good for us.”

“It’s definitely good to do something different,” Washington said, noting all the punk and hardcore bands he’s played in before.

Louisa isn’t so easy to define, integrating elements of indie rock with a punk vitality, which comes through in their energy and Dittmar’s steadfast, lower range vocals.

“I can’t even explain what it is. We’re waiting for someone to be like, ‘Oh, that’s what kind of band you are.’ I don’t know. I think our lyrics are really emo, but then, musically, we’ve got a whole bunch of different genres,” Dittmar described.

“Half of our songs are capo’ed, so they’re a little higher than playing in first position. It’s the only way I could sing with it. How I write a song is I’ll play a couple chords and get a chord progression down, and then I’ll write lyrics and just write it all together. It’s the only way I’ve been able to do that, and whatever turns out turns out.”

“Of course, punk music has always been a huge influence, so there’s a lot of that in my drum style that I don’t try to step on Amanda’s toes either,” Jolley continued. “It’s a good back and forth, a lot of balance between the styles in the band.”

That balance has made them proud to show off this new band, and they run through their roughly 20-minute set with ease, the loud, pulsing energy in the room defying the quiet little neighborhood just outside. It’s a new, but welcome creative release for Dittmar, though her nerves are present in her body language until she begins another song.

“When I play, it’s completely different [than photography]. I get really anxious right before I play,” she admitted.

“There’s such a disconnect between visual art and what you hear. The sensation is different, the experience is different, but at the end of the day, it’s kind of the same influence. Both are aesthetic. Both can trigger memory,’ Jolley, a psychology student, mused.

“I’m a little terrified,” Dittmar continued, thinking about their upcoming show and wanting to throw up.

“Yeah, so am I,” Washington acknowledged.

“I don’t know what it is about me, but my nerves shut off,” Jolly asserted. “I guess this is what I’ve put all of my mental energy into doing and producing, and this is what I do, so I kind of fall into that and become happy with what I’m doing.”

Open practices with other musicians hanging around the basement have helped ease that tension, along with two short acoustic appearances at house shows that have already garnered them praise for their relatable songs – particularly for one called “Cassie.”

“I think out of all of our songs, it’s the most emotional. It takes the most out of me, so to start with that, I’d probably be dead for the rest of the set. It’s a song about a friend of mine in college that hung herself. The first line is,’ Swinging from your porch’ – she hung herself off her dad’s porch,” Dittmar related without hesitation.

“Lifeless body hangs
And you have left this place
It’s cold and lingers here
I cried, but you stayed near”

“My last words to her weren’t the nicest, and it’s kind of weighed on me for years and years and years. Even though I know it’s not my fault, it’s still… your last words to people matter, so you should be mindful what you say to them. It’s kind of my apology to her for not being more mature at the time and being the bigger person in the situation.

“When I first wrote the song, a huge weight lifted off. Every time we play it, I just connect on that level with that song. … I hope one person at the show will connect with a song and be like, ‘That’s what I’ve been thinking. Finally somebody else said it.’”

That’s happened already, so when Louisa blows through their inaugural powerhouse electric set at the Courtdale United Methodist Church surrounded by their friends in Esta Coda, Lila Ignite, Black Diamond, Backslashes and Bad Ideas, and Spur, they’ll likely be preaching to the choir.

“When I announced to a couple friends from the tri-state area, ‘Hey, I’m doing this new band. We demoed. We’re doing our first show,’ we had an overwhelming amount of support. ‘Hey, let us play. We’ll help you with the show.’ I think we got a really interesting mixed show coming up on the 18th in Courtdale,” Jolley said.

“I’m pretty sure that people are going to like it,” Washington agreed.

As they head outside to Jolley’s backyard for some group shots, Dittmar says that, at the end of the day, she’s just happy to be playing with her best friends.

“I couldn’t ask for anything more.”

Except, of course, that people just pronounce Louisa correctly.