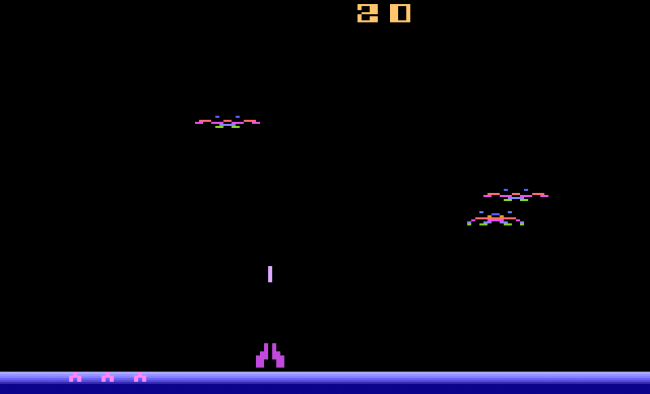 It’s the early 1980s, and your favorite writer of all things retro video games is but a wee lad learning the ropes as far as video games are concerned. Introduced to such games as “Bowling,” “Boxing,” “Space Invaders,” “Carnival,” and “Donkey Kong” on a glorious wood grain Atari 2600, it wasn’t long before I ventured out on my own to find games I would like without the influence of siblings or parents.

In truth, it was a lot harder than it would seem, as a lot of games at the time were mere copies, if not blatant rip-offs, of more popular titles. Still, I truly believed I had stumbled upon something uniquely my own in “Demon Attack,” a game that didn’t come on a traditional-looking Atari 2600 cartridge, with its sleek use of silver and a pointed end to its cart where it was usually boxed off.

Still, the question remained as I sat down to play this title again: Was my 7-year-old self merely blind to the fact I was playing “just another shooter” on a system known for them, or, over 25 years later, could I still appreciate it as a good find? Today on Turn to Channel 3, we journey back to a different time in the era of video games to see just how “Demon Attack” has faired after all this time. Get your joystick ready – it’s go time!

In the era where systems like the Atari 2600, Colecovision, and Intellivision reigned supreme, the simplistic nature of games cannot be understated. That being said, there were always those games that gave you a little something extra as far as sound effects are concerned. In the case of “Demon Attack,” while the simple bleep of firing off your weapon at an enemy may seem quite boring and monotonous, it’s the unique sounds of those enemies that keep you coming back.

In addition, the sound of those enemies appearing on screen, that subtle but not too subtle whooshing sound, is definitely one of the more underrated pieces of Atari 2600 history. If that’s not enough for you, should you complete a level, there’s a little jingle that leaves you feeling pretty good about the whole experience.

While probably the weakest part of the game, to most people playing a title on this system, this won’t come as much of a shock. While games like “Galaxian” and “Galaga” show you a physical space ship, “Demon Attack” leaves you with what looks to be the Atari logo with a cannon that fires out of it. Once again, it’s the enemies that shine here, as the various demons and creatures that come whooshing onto your screen are colorful and full of life. Even for a game of this era in video games, and it’s worth noting that even when some split apart to create smaller demons, the quality doesn’t go down in the slightest.

Obviously, with not much to look at and a limited amount of sound effects, it’s the gameplay that keeps gamers coming back to “Demon Attack.” The steady increases in difficulty per level, the amount of enemies flying onto your screen, some splitting into two smaller enemies – all of it becomes this fast and frantic race to eliminate enemies before they make a pass at taking you out. Enemies begin changing up their attack patterns, some of their weapons become more and more powerful, and there you are, still with that same ship and no power-ups – just the solid bleep of a single shooting weapon.

“Demon Attack” is like “Space Invaders” without a rope; there are no barriers like in the Atari 2600 version keeping you from getting attacked. It’s just you against a barrage of demons, and if you love classic shooters like that, then this is a game for you.

“Demon Attack” doesn’t share the notoriety of other such classic Atari 2600 games like “Pitfall,” “Frogger,” and “Space Invaders.” It also, thankfully, doesn’t share a lot of the hatred that games like “Pac-Man” and “E.T.” do on the 2600. “Demon Attack” is a consistently good game that doesn’t give you a whole lot of bells and whistles, but really doesn’t need to, because at the core of it is a simple, addictive, and exciting shooter that offers no apologies for throwing you right in there in the thick of things.

Yes, shooters would continue to get better and better from this point on, but I’d like to imagine that, had a game like “Demon Attack” not existed, those better shooters wouldn’t have much inspiration to draw from. It’s relatively inexpensive, so if you’re looking to start or even expand your Atari 2600 collection and you have a knack for quality shooters, then “Demon Attack” is a fun experience you should pick up.

I hope you enjoyed our trip back to the Atari 2600. Join us next time as we return to the ranks of the NES and one of the most well-known and well-respected beat em’ ups not to have the name “Dragon” at the end of it.

Until then, stay clear of those demons, and always remember to game on!