Northeastern Pennsylvania tribute act The Idol Kings perform the music of Journey, Tom Petty, and John Mellencamp across the country, but this Saturday, Jan. 17, they’ll be playing right at home at the Scranton Cultural Center at the Masonic Temple.

The majority of the band’s gigs are out of the area, so NEPA Scene sat down with Mark Wanko, Michael Crow, Charlie Russello, John Carpenetti, Adam DeTroia, and Stephanie Kotz, filling in for Candi Vee, to welcome them back and to familiarize local music fans with this fun and professional group that was voted the Tribute/Cover/Party Band of the Year at the Steamtown Music Awards.

Interspersed with clips from their live show, they discuss how they chose the musicians they idolize, the difference between a cover band and a tribute act, venues (or lack thereof) in the area, and what it’s like performing in front of thousands of people, among other topics.

Doors open at 6:30 p.m., and the show starts at 7 p.m. Light fare and a cash bar will be available for purchase throughout the evening.

Tickets, which are $20, plus fees, can be purchased by contacting the Fidelity Box Office at the Scranton Cultural Center (420 N. Washington Ave., Scranton) in person, by calling 570-344–1111, or via all Ticketmaster outlets. 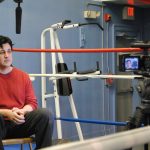