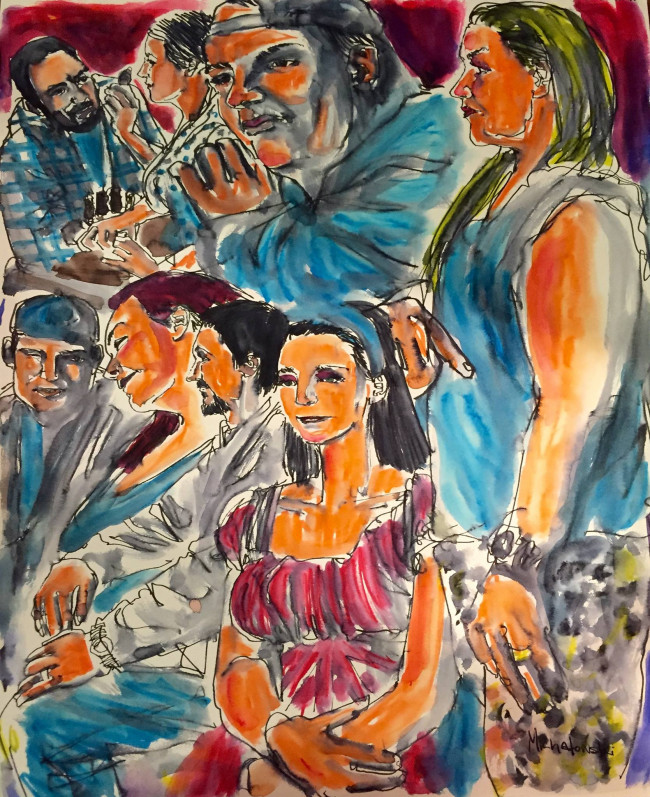 Those close to Scranton playwright K.K. Gordon know that he has a highly developed sense of humor, but in more than a decade of writing, his comedic side hasn’t really been reflected in his work – until now.

Best known for penning dark dramas and taking on roles in horror films, audiences will experience the lighter side of Gordon with six original short – and funny – plays titled “Short Works from the Big Guy.”

Gordon is an accomplished playwright, actor, and poet in Scranton. He is currently competing in the Strawberry One-Act Festival in New York City, and “Short Works from the Big Guy” is under consideration for publication with Smith and Kraus Publishing.

His past awards include first place at the Snafu Festival in New London, New Hampshire; two first place awards at the Shawnee Festival (2012 and 2014); second place at the New York City 15-minute Play Contest; Featured Theatrical Artist at Artomatic in Washington, D.C.; finalist in the Hobo Robo Festival in Chicago, Illinois; and finalist in the Minnesota State 10-page Play Contest.

Inspired to become a writer by a longtime tradition of storytelling in his family, Gordon has been active in the local arts scene for nearly 20 years. He has worked with Diva Productions since 1999, and more than 20 of his plays have been produced in Northeastern Pennsylvania. Throughout his career, he has won more than a dozen NEPA Theatrical Alliance Awards, including Best Original Productions, Best One Act, and Best Drama.

He has served as a creative consultant to Scranton Public Theatre’s Jason Miller Playwrights Project and as a Pennsylvania state rostered artist/instructor specializing in theater and poetry for the NEIU’s Art Save program for at-risk youth.

Finding the Inner Chuck Norris: When Gunter shows up late at Eric’s house for their weekly movie night, fresh from the sleaziest, scummiest bar in town – without beer in hand – Eric knows something’s up and suspects his friend has started some trouble. But Gunter, suddenly the world’s biggest Chuck Norris fan, explains that violence is stupid, as Chuck Norris would be the first to tell you. Gunter refuses to take anything seriously and says that his friend needs to learn how to take a joke – it’s April Fools’ Day, after all.

Real Friends Help You Move: Holly, the perfect displaced homemaker, now freshly back in the dating pool, needs her head-banging sister Molly’s help when it comes to the disposing of a certain body. Wackiness ensues!

Chess and the Gottvater’s Daughter: Bruce is pretty sure that Juan, Jose, Carlos, Pepe, Angel, and the rest of the boys who live in the apartment next to Violetta, his Bulgerian trophy bride, are Mexican. But what does he know? Vlad, Violetta’s father and former Soviet bloc criminal boss, thinks the boys are KGB in deep cover. The only thing Bruce is sure of is that his marriage is a sham that will last long enough for the beautiful and exotic chess champion to graduate, move to Florida, and become an underwear supermodel. But during a loud and dramatic shouting match staged for the benefit of the boys next door, something very strange and wonderful happens!

Flesh Eaters of Hyde Park: Playwright K.K. Gordon is thrilled that his short two-man play, “Flesh Eaters of Hyde Park,” a play about his misadventures in London, is opening tonight. However, after learning that his best friend and fellow traveler, Pat, must be replaced by Pat’s cousin Patty (formerly a “Disney on Ice” princess), K.K. has to adjust. Wackiness ensues!

Killing Naked Roses: Stan, a.k.a. “Orion Rage,” needs the help of his socially awkward cousin, Pete, a.k.a. “Peaceful Jesus,” to help him scam his way to the top of the art world. But, before the show opens, Camy Grabowski, a.k.a. “The One that Got Away,” reminds Orion Rage that art is like the Holy Grail – it’s what you put into it that matters.

Man’s Inhumanity to Missy: After seeing the face of his ex-girlfriend, Missy, on the cover of a national science journal, Kevin, a disgruntled writer, realizes something – that he may not have been the smart one in the relationship – with hilarious and heartwarming results.

Free parking is available in the lot behind the theater and on the street. For more information, e-mail divatheater@comcast.net, call 570-209-7766, or visit Diva Theatre on Facebook.

For photos from Gordon’s recent performance at Synaesthesia Social at the Olde Brick Theatre, click here.