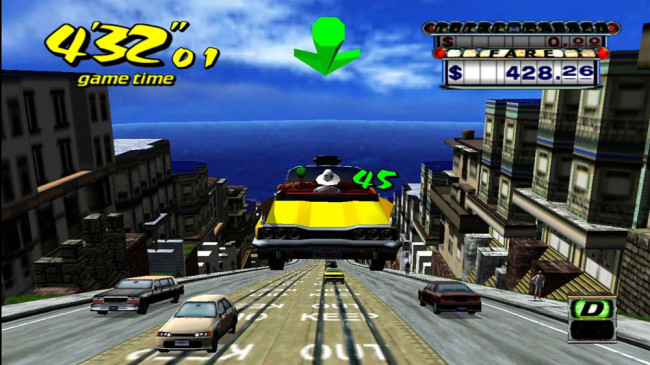 One of the most unique things about being involved in the retro video game business is witnessing items, whether they are games or consoles, reach this cult status that almost supersedes the notion that when it first debuted so many years ago it wasn’t very good at all.

Prime examples of this are those consoles that may have seemed innovative and in a class of their own at the time, and in some cases were ahead of their time, but were marketed in a way that didn’t quite appeal to the masses. These are also usually the last (or even only) hurrah for a company that threw its name in the hat to try to take our attention away from the heavyweights of the industry at the time.

Today, we’re going to look at “Crazy Taxi” on the Sega Dreamcast, a system that was our last chance to own a Sega console, debuted to great fanfare, but was quickly crushed under the weight of the mass appeal of Sony’s ever-growing video game industry presence. “Crazy Taxi” delighted gamers in the arcades, but could it replicate that on a home console? Let’s hail a cab and go on one crazy ride!

To a lot of gamers at the time, “Crazy Taxi” had a great first impression, and this all begins with some killer tunes from Bad Religion and The Offspring – tunes that, while tiresome after a time, still get your adrenaline pumping for a romp through the streets of San Francisco. In addition, the vocal samplings from your driver as well as your passengers give it a unique and kind of quirky feel to things. Obviously, the sounds of the car, including its interactions with various environments, are par for the course here, but it’s that total package, all of these elements combined into one, that really set the pace for what will be an exciting adventure on the Dreamcast.

When you have graphics so crisp and detailed that it actually makes the gamer just want to drive around to do some sightseeing, you definitely have something special going on. Just the fact that you can drive through town, seeing real businesses like Pizza Hut (who always seemed to enjoy product placement in classic games, now didn’t they?) and Levi’s Jeans one minute, then be cruising around the beach (and even underwater!) is a testament to the amount of detail and variety Sega brought to the table for this one.

The colors in this game are bright, dazzling, and vibrant, which really fits well with the name “Crazy Taxi.” The traffic and the pedestrians all look great, as do your driver and the passengers you pick up. This game may have looked a bit better in the arcades, but man, Sega came REALLY close to pure arcade-to-home-conversion perfection in this regard.

While the formula is quite simple – race through portions of San Francisco, picking up passengers and taking them to their destination as fast as possible for optimal points – the addition of alternate routes helps give enough variety to this basic gameplay. All of this aside, it really is the thrill of driving around like a maniac, getting points for doing some pretty reckless things, along with some hilarious unrealistic driving features like accelerating when you hit certain objects, that makes this game something uniquely its own.

If there are any flaws in the gameplay, they would be that drifting was made way too complicated in this game, and that all too often when picking up passengers, you peel out, which ticks off precious seconds in your quest to make great time.

Keep in mind, at the time this game arrived on the scene, there really wasn’t anything like it, and later games like “Burnout” and “Simpsons: Road Rage” would more than generously borrow things from “Crazy Taxi,” like timed driving and awarding points for driving like a madman.

While I don’t necessarily look at games as seasonal favorites (in my opinion as long as it’s a great game, you can enjoy it anytime), it’s certainly worth noting that when you live in an area of the country where seemingly every week in the month of February meteorologists are concocting another “forecast of doom,” it feels nice to cruise through the sunny streets of San Francisco, plowing through hot dog stands, sending careless pedestrians running for cover (hey, they’re in the way of MY route!), and weaving through busy traffic, all in the name of that precious cheddar that can only be made by the most crazy cab driver in the Bay Area, circa 2000.

This has been another edition of Turn to Channel 3. I hope you enjoyed our ride in a crazy taxi. Next time, we cruise back to the NES for something a bit more familiar and, well, rather fitting for the month of February.

Until then, stay warm, enjoy those milk sandwiches, and always remember to game on!