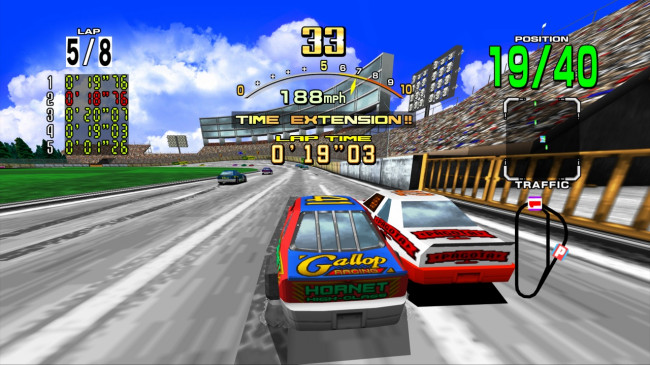 For many years in the video game industry, the task for developers of arcade smash hits was to somehow take what stood proudly in its arcade cabinet, surrounded by eager players, and bring that same kind of excitement and gameplay to a home console. Sadly, most of the time, developers were unsuccessful, usually due to the limitations of home console hardware, but there were some who were successful, or at least gave players as close to an arcade-quality game as they could.

From time to time here on Turn to Channel 3, we are going to be looking at games on less than popular systems, as well as arcade classics and their debuts on home consoles. Today, we take a look at “Daytona USA,” an arcade racer that really could do no wrong in the arcades, but could the same be said for its outing on the Sega Saturn? With this in mind, fasten your seat belts, race fans! It’s time to start your engines for “Daytona USA!”

Yes, “Daytona USA” has all those sounds you’re used to from the arcade classic – the roar of the engines, the sound of screeching tires as you attempt to make it through hairpin turns – but I’m not sure, even after all this time, what Sega was going for with those tunes that play as you race by. It still sounds almost incoherent, like whoever was recording these was tone deaf to their vocals. I mean, if you’re into these quirky songs, that’s fine. I guess we all have acquired tastes, and if something like a washed-up Latin pop singer doing his Japanese karaoke debut is your slice of heaven, by all means enjoy, but I don’t think that’s what Sega was going for here.

There is no denying that for the time, the graphics presented in the arcade cabinet “Daytona USA” were among the most breathtaking things a gamer would see. However, for some reason, it almost feels like the graphics hardware on the Sega Saturn can’t keep up with the demands this game imposes on it, as a lot of things you speed by are almost materializing before your very eyes! That’s just a little kooky for my tastes.

In addition, in comparison to other popular racers of the time, namely “Ridge Racer,” the graphics here on the Saturn feel kind of clunky in retrospect. There is no denying the effort put in by developers, but it almost feels like Sega tried to cram an entire arcade cabinet into a single disc, which literally and figuratively speaking is an insane task to try. Kudos to their attempt, but the Saturn is just too limited for something this vast, which is shocking considering this is originally a Sega arcade game.

Despite its limitations, “Daytona USA” can still be a blast to play, but only in short bursts I would think. You don’t have much of a selection in car choice, and the steering is a bit questionable, as more often than not you will swear to the gaming gods you put your brake on early enough to prevent crashing into a wall, only for it to happen over and over and over again.

However, if you find yourself bored with these simple races, you can always input the galloping horse, which oddly seems to travel and sound at least somewhat like a racecar in certain aspects, and that’s always hilarious. Come on, admit it – there’s this sick side of you that enjoys the idea of trying to steer a horse like a race car in hopes it doesn’t hit a wall. What’s that? It’s only me? Oh well.

For better or for worse, “Daytona USA” was, for a lot of us, our introduction not only to arcade racers, but to the Sega Saturn itself. What Sega created on paper and what ended up in our hands are two entirely different things. To say “Daytona USA” is a serious arcade-style racer is like calling “Crash Bandicoot” the most dramatic and in-depth video game since “Grand Theft Auto III.”

What we have here is a quirky racer that was not intended to be looked at in a humorous manner, but because of this, it has almost attained this cult status of being so bad that it’s good. Like those movies we don’t want to admit we like, or the music we listened to in the ‘80s and ‘90s that is so cheesy we swear Hickory Farms could make some money from them, “Daytona USA” is a part of our gaming history, whether we choose to admit it or not.

Join me next month when we look at a game on the NES that, despite being beloved and highly sought-after, probably caused a lot of young gamers to learn their first curse word, or a lot of broken controllers and temper tantrums, if nothing else.

So stay warm, break out those snow blowers, and as always, game on!