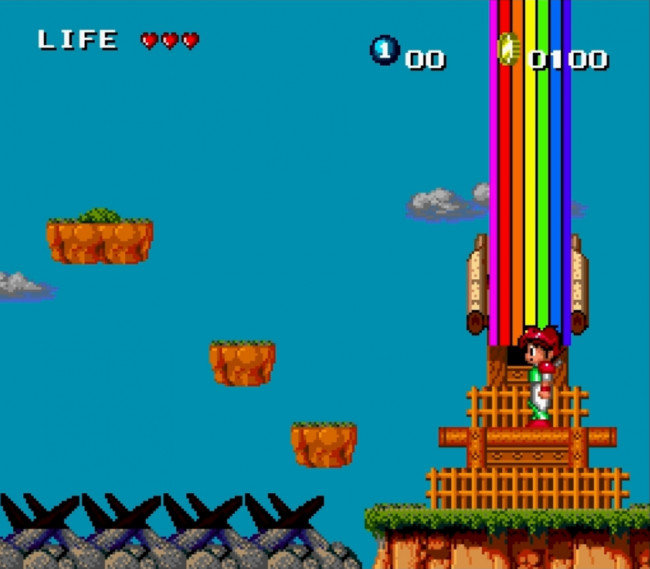 Sometimes it just doesn’t pay to root for the underdog. This was a lesson my brother Len and I learned long ago when we took a chance on a virtually unknown console at the time, the TurboGrafx-16, a console that was huge in the European and Asian markets and was rebranded by NEC under this new and flashy-sounding name, debuting smack dab in the middle of such consoles as the NES, Sega Master System, and later, the Sega Genesis and SNES.

Obviously, one can surmise that with these other, far more popular systems on the market, the console was doomed from the start. There are a lot of reasons why, and today we’re going to review one of those reasons. To many, “Keith Courage in Alpha Zones,” the pack-in game with the console, was a horrible decision made by NEC, who had far more quality titles they could have chosen – namely their mascot, Bonk, of the famed “Bonk’s Adventure” games. Nowadays, TG-16 titles are becoming harder and harder to find, fetching some absurd prices for even common titles. Don’t get me started on the TurboGrafx-CD titles, which are about as easy to find as a Loch Ness Monster sighting and cost about as much as a trip to Nessie’s homeland to try to seek her out.

The question remains, though: Is “Keith Courage in Alpha Zones” really as bad as critics say, or was it thrown under the bus with the overall commercial failure that was the TurboGrafx-16? Without further ado, let’s get right to it!

In truth, the sound quality of ANY game coming out of this system is quite good, and much clearer than its contemporaries. That being said, “Keith Courage in Alpha Zones” has some lighthearted and simple music in its overworld levels. There’s nothing fancy going on here, with the occasional switch of tunes when you enter a hut for things like weapons, bombs, and to restore your health. When you leave this portion of the game and head into the darker, more brooding sections of the underworld, that’s when the music in the game really shines, but again, there’s nothing earth-shattering going on here.

The sound effects in the game are pretty generic-sounding, too, from the jumps and use of your tiny little sword in the early stages to the louder-than-necessary sounds of your bigger sword and Nova Suit movements in the underworld stages. I think if this game had more variety in this aspect, I wouldn’t have such a “ho-hum” attitude about the music and sound effects. This is the beginning of many aspects of the game where you just feel like developers didn’t try hard enough.

If you’re a fan of Japanese anime cartoons, then “Keith Courage” will be a world you’ll feel right at home in. The funny thing is, the instruction manual and most promotional work for the game does not express this kind of artwork, but more of a, dare I say, “Prince Valiant” comic strip look? I won’t pass judgment; I grew up in an era where a barbarian or, even worse yet, Fabio, was depicted as the lead hero in the “Wizards & Warriors” series on the NES, only for us to turn on the game and see a knight in a full suit of armor.

Keith Courage himself has a very cute, cartoony look to him, and most of the enemies and allies you encounter follow that same pattern, although some are truly bizarre, like the giant pistols with faces that come after you and take several hits from your sword to defeat. The Nova Suit, and your transformation into using it, is probably the best example of some solid graphics work in this game, but sadly, that’s probably the only one. Overworld and underworld stages all look fairly similar, with only minor differences that don’t do enough to make them stand apart. The bosses, while vile-looking, still don’t seem to capture that excitement you get when facing a boss in an NES or Genesis title.

We all know how action/platform titles work, and yes, many of them follow a pattern that can become boring and repetitious, but I find that many others throw in something different now and again to throw you off, to catch you when you become complacent and think you know what’s coming next. In the case of “Keith Courage in Alpha Zones,” you want this to happen, and as you go through the levels, it’s almost like you need it to in order to justify playing this game, but sadly, that moment never comes.

You go through a bright and cheery-looking level, defeating some pretty bland enemies while trying to keep yourself from instantly dying on a pile of spikes and saving up coins to buy new weapons, bombs, and getting your life ready for the next stage. You stand on a platform, a colorful rainbow beam takes you down into the underworld where you don your Nova Suit and go after some darker, fairly more detailed enemies and bosses that frustrate you, but less because of difficulty and more because you’re just not enthralled with them. “Keith Courage in Alpha Zones” does increase the difficulty as you go along, but never in a way that makes you feel like the game is impossible to beat.

“Keith Courage in Alpha Zones” is not the worst game in this obscure system’s library, but as I said, NEC did themselves a great disservice in packaging this game with their gift to the Western world of video gaming. Who knows what their fate would have been had they packaged the game with some of their great versions of games like “Galaga” and “Splatterhouse” or, of course, a “Bonk’s Adventure” game? We’ll never know. What we do know is the TurboGrafx-16 never gave us their “Super Mario,” “Sonic the Hedgehog,” or “Crash Bandicoot” game to identify with as a consumer, and for that, they dug their own grave.

However, just in the credit card-sized HuCards made for this system, over those bulkier carts we find on other systems, the TurboGrafx-16 did find itself some customers, including my brother and I, but not enough to make a dent in the market.

Well, I hope you enjoyed my take on a game that just didn’t quite hit the mark. Next time on Turn to Channel 3, we take a ride in a game for a Sega system that also doesn’t get the appreciation it deserved.

Until then, take care, and always remember to game on!