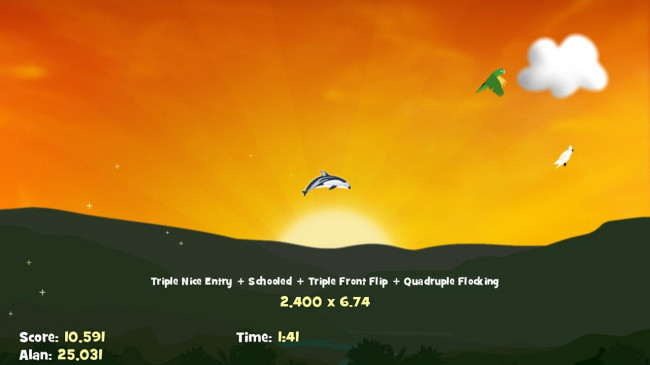 It never ceases to amaze me, those young customers who come into my store and consistently question how anyone, never mind yours truly, could be entertained by some of the games of times long gone, and one of the things I always stress to them is that while these games may not have been pleasing to the eyes, leaving a lot to your own imagination, what they did have was simple, yet addictive gameplay.

Video games today are a lot of different things to whoever is playing them. There are some gamers who are simply at a loss for words at the realistic graphics, while others love the feel the elements of music and sound effects add to gameplay, but at the core of every game is the same burning question that all developers, whether big budget or indie, need to ask themselves: Is what I’m creating something that people will come back to over and over and over again, seemingly without any amount of boredom that will make them want to return the game in a month’s time? Video games, whether they’re from the 1980s or something that just came out yesterday, have to have an addictive nature, a replay value, that makes the purchase worth it for the consumer.

While the result of buying a $60 game and realizing you made a grave mistake can be disheartening for a gamer, nothing beats that moment when you find something you never knew you’d like, and that is the case with today’s video game review, “Dolphin Up,” for the Nintendo Wii U console. In truth, I purchased this game on a whim, mostly for my fiancée, Kathy, who is an avid fan of all things dolphin.

So what makes a game that features an animal made famous again recently by the two “Dolphin Tale” movies so appealing? There’s only one way to find out, so with the Wii U ready to go, let’s do some swimming with dolphins, shall we?

It’s more than simply notable that “Dolphin Up” is missing any real significant soundtrack. There’s no cheery, upbeat music to greet you at the title screen – just the soft sounds of the ocean waves. No, this game is all about sound effects, from the sound of your dolphin jumping out of the water, to birds and polar bears reacting when your jumps get a little too close to them. If there’s anything that comes close to actual music, it would be the celestial tune that plays as your jumps get so high that you’re actually reaching the moon and even Mars! Aside from this tune, the sound of fireworks as your dolphin meets the night sky and, yes, what many refer to as dolphin laughter, those cheerful chirping noises they make, are all far more present in this game.

When looking at the graphics as you play this game, you honestly wonder if you’re playing a mobile game that would look right at home on an iPhone or Android phone, which this game is also available for. They are that simple. Your dolphin, the fish that school with it, and other animals like polar bears and parrots, are all fairly small sprites in size. The levels don’t look much different, other than the bottom of the ocean you’re swimming in, and, of course, the surroundings up above, from the tropical isle of Dolphin Reef to the icebergs of the polar bear level and the Amazon jungles of the third level. The fireworks display is beautiful, and the moon and Mars look pretty impressive, too.

The most fun and addictive games are those that, while having a simple premise, have one that’s worth coming back to, worth trying to strive for that elusive high score. In the case of “Dolphin Up,” what you essentially have is a cross between the Sega Genesis “Ecco the Dolphin” games and the “Tony Hawk’s Pro Skater” games in that the various combination of tricks and flips you can do with your dolphin get varying names, as do the amount of fish who school with you, as well as the use of special hoops and other animals for extra boosts.

If that’s not enough, the higher you go, setting up fireworks, reaching the moon and Mars, as well as leaving little dolphin imprints in the stars, can also help you rack up points for the leaderboards. The game gives you two minutes to accomplish whatever you can, and the higher you go, the faster you fall. It requires you to complete a nose perfect dive to keep your momentum going, but it’s worth noting that the higher you go, the faster you also fall into the ocean, and if you don’t use the buttons necessary to turn your dolphin friend fast enough, he will hit the sea floor with a sickening thud.

Obviously, it’s easy to look at the repetitious chain of actions in “Dolphin Up” and quickly find it boring or a waste of time, but in truth, that’s exactly what the game is supposed to be – something to waste time playing while you do something more important in your day, whatever that might be.

It is, without question, deceivingly addictive, something you instantly wave off as utter nonsense, only to find yourself playing for 45 minutes, trying to get your dolphin to do all sorts of tricks in the quest to get it into space. At just over $4 to purchase on the Nintendo eShop, it’s quite the value as well. In an industry where consumers are constantly being told they need these games with the big-budget graphics, killer soundtracks, and hundreds of hours spent to unlock every little thing, for a guy like me, who grew up with the likes of “Space Invaders,” “Pac-Man,” and “Galaga,” it’s nice to know this form of entertainment hasn’t lost sight of those simple things that keep gamers coming back for more. It’s a truly refreshing thought, isn’t it?

Well, there you have it. Look for more reviews like these in the future, along with my usual Turn to Channel 3 column, which you can catch here every Tuesday on NEPA Scene!

Note: All ratings for Turn to Channel 3 and Nick’s game reviews are based on a scale of 1-10.