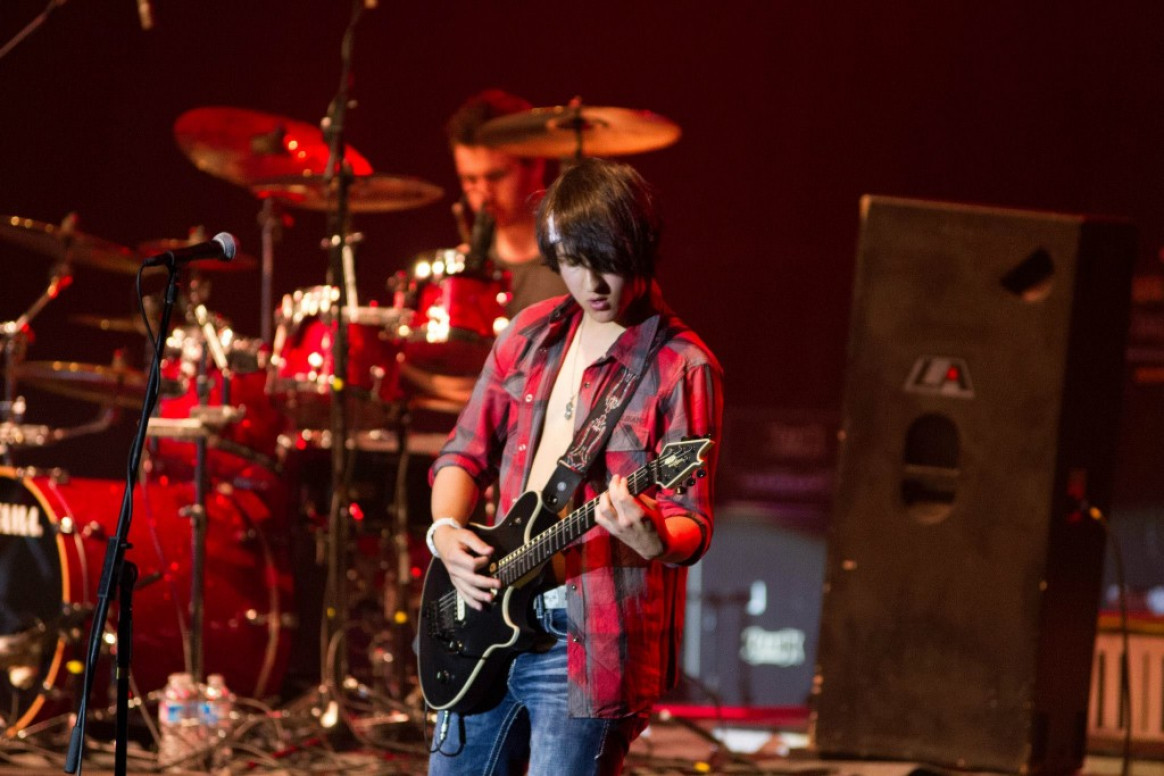 Dakota McGeehan knows what he wants in a great rock song.

“I like the heavy guitar riffs that you can’t get out of your head and the catchy lyrics that will have you humming for the rest of the week,” says the vocalist/guitarist of the Lehighton quartet A.D.D. – his enthusiasm for the power of the music nearly bursting at the seams.

“I love when you can hear the kick drum so loud that it will make your balls rattle for the next hour and a half.”

McGeehan, along with bandmates Tyler Ritter (lead guitar), Nick McGeehan (drums – no relation to Dakota), and Billy Voight (bass), have recently confirmed talks with Atlanta, Georgia-based label CBM Records on a possible breakthrough deal that would greatly expand the band’s brand and further cement an already ferocious live reputation. It’s a big deal for a young group (Dakota McGeehan recently graduated from Tamaqua High School, and the rest of the guys are just months away from graduation) who came together just a few years ago.

“The band found me playing at Damon’s Bar and Grill in Hazleton while they were on their search for a new lead singer,” recalls McGeehan of his 2012 introduction to A.D.D.’s ranks. The band’s origins go back to 2010, when brothers Matt and Nick McGeehan, along with Ritter – all students at Mike Stanley’s Royal Jam Music Conservatory – began playing classic rock covers until then-current vocalist Marcus Kinkel left for college. A desire to move forward with original material strengthened upon the hookup with Dakota McGeehan.

“They asked me to audition for the spot, and the first practice we had together, we just clicked and knew we had something,” Dakota McGeehan says. “As for bass players, well…,” he laughs at the inside joke surrounding the revolving door of A.D.D. bassists before settling with Voight.

Listening to A.D.D’s recently released debut disc, “Confessions of a Lunatic,” the very record that grabbed the attention of CBM Records, it appears that all things loud, abrasive, and glorious under the rock ‘n’ roll sun are represented within the band’s sound. Every degree and generation of rock fan will more than likely find something brashly melodic to which they can groove from these guys.

“Well, we are very diverse when it comes to the music we listen to,” McGeehan says. “Our drummer listens to funk and alternative rock, I enjoy listening to the ‘90s grunge era and all rock, and our guitarist listens to metal. When you listen to our CD, you can hear all of our influences right off the bat.”

From the mid-tempo grind of “Save Me,” to the plodding bass and string-scraping anxiety that fuels “Rage,” and even the Foo Fighters-meets-Guns N’ Roses element of frenetic danger in “Alone,” A.D.D.’s “Confessions of a Lunatic” never settles into complacency.

McGeehan notes that the A.D.D. sound is indeed a subconscious diffusion of swirling musical colors.

“We don’t consciously write to sound like our influences,” he tells, “but we each put in our own musical tastes during the writing process, giving us our current sound.”

So, how exactly does McGeehan see his band’s creative trajectory since his ascension to the mic?

“The band has grown as a whole, with everything from writing our own originals to having our own merchandise,” he answers. “As our setlist of covers grew, we began to realize what we really wanted to do – and that was our own material. As we have written more material, we could start to hear that our sound has been evolving and maturing.”

McGeehan speaks positively about his bandmates in the conversation’s turn to A.D.D. revolving around a truly collaborative, musical team. He reveals a band that is driven and focused to succeed, yet not taking themselves so seriously that they can’t enjoy the ride.

“We all have something that we each bring to the table,” he begins. “As far as the songwriting goes, Tyler puts together the basic chord progressions and riffs and I add to that my lyrics and melodies to form the initial song structure. Nick then adds his style of drumming to what Tyler and I created, then we each collectively make the tweaks until we are satisfied – which we never really are. As for our live performances, we all enjoy playing together as a band, and we can tell the crowd feeds off of our energy.”

The “Confessions of a Lunatic” record, which was recorded over a two-week period in November of 2014 at JL Studios in Olyphant, was a creative high-water mark in the young band’s still-burgeoning existence. McGeehan speaks of a satisfying experience regarding the album and its creation.

“The process went very smoothly; we pretty much knew already what we wanted for each song, so it was all planned out ahead of time,” he explains. “Joe [Loftus, studio owner/producer] was a great help in getting the exact sound we were looking for.”

And, while McGeehan doesn’t reveal any particular “it” moments along the record’s path to completion, he does say that every session was fruitful.

“Nothing stood out while we were actually recording the CD,” he says, “but probably the most memorable moment was hearing the completed CD for the first time and feeling like we accomplished something to be proud of.”

As if this band was lacking for moments upon which they can build a name. There actually have been several attention-grabbing gigs A.D.D.’s played thus far in some big rooms that many bands three times their age have yet to work.

“Last year was full of amazing opportunities for the band as a whole,” McGeehan concurs. “We opened for Sammy Hagar and Tesla at the Sands Event Center in Bethlehem. After performing in front of literally thousands of rock fans, I believe that it made us all realize that this is what we wanted to do and take it seriously. I think what really made myself and the band realize that was just simply talking to the musicians backstage. After hearing their stories of how hard they worked to get to where they are today, it really made us want to work even harder to achieve the same goals as they did.”

These live milestones certainly can’t hurt when presenting their wares to CBM Records.

“We’ve been in contact with them for the past couple weeks now,” McGeehan says. “We actually got in touch with them through ReverbNation, and we were all shocked because, normally, we hardly ever win anything we sign up for. Maybe this is a sign. My thoughts on the record deal are that I think it will really take us to the next step with our careers – especially being the youngest band in our area.”

Speaking of their home base, McGeehan offers a bright perspective of his local music scene. He talks of the standard cover-song dues being paid, transitioning into inspired, original material – a move he’s happy his band has made.

“I feel that original music in the Carbon County area is very enjoyable and inspiring,” he reveals. “I’m glad that more and more bands are choosing the path of creating their own material instead of just being a cover band. Now, I’m not bashing cover bands; every band at least had to do covers at one point in their careers. I’m saying that if a band wants to be taken seriously and wants to move on past the bar scene, they would have to have their own originals and stand out from the rest.”

McGeehan ends the conversation with a burst of optimism as to what 2015 will bring, and the possibilities the band has in front of it. Some notable future notches on the band’s road cases include a trip up Interstate 81 to play Scranton’s V-Spot with Graces Downfall and Governing Murphy in March, and an opening slot for Adrenaline Mob at The Legendary Dobbs in Philadelphia in April.

“We’re so excited for this new year with everything, from starting with the record label, to making new merchandise, and gaining new fans,” he says. “People can keep up with our shows on our website at add-rock.com – and make sure to come on out. See you guys soon!”

with Next to None
Location: Chicago Restaurant & Nightlife (1179 Airport Rd., Allentown)
Date: Thursday, March 5
Time: 7 p.m.
Show is all ages.