I sometimes personify the merchandise that comes through my auction gallery. I make no conscious effort to do so. It’s just that sometimes I can’t help but see a cheerful chair… a hopeless chest… an amorous figurine… a spiteful mirror… a lonely locket… a mischievous doll… Indeed, sometimes I see so much humanity in the stuff from estates that I am moved to verse, as I was many years ago when I composed this simple poem…

Antique mannequin,
disgraced and weathered,
tarries naked and wigless.
No blouse caresses her buoyant breasts.
No stockings slink over her long legs.
Shoeless…
Windowless…
Hard composition and rigid… frigid…
with a wing bolt in her ass.

And being an auctioneer, I regularly deal with the property of those who have passed on. I am therefore persistently reminded of the transience of human beings, of the brevity of life. So it was one morning, when I was traveling to work and composed this simple poem in my head. It wasn’t until much later that I realized I had composed my own epitaph…

I will have been a cloud
that by some chance
was recognized by someone
as resembling something –
Until, by the same winds that formed me,
I am dispersed. 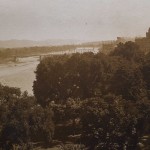