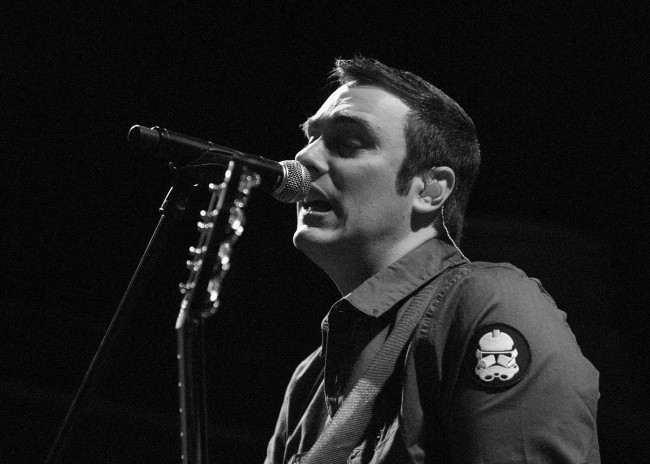 As we pulled into the parking lot of Bull Shooters Saloon in Philadelphia at 6 p.m., roughly two and a half hours before show time, the line was already wrapped around the building. It was filled with loyal fans sporting their Breaking Benjamin gear proudly, and even a few people sitting in their cars blasting the band’s hits.

Just before the show began, the sold-out crowd grew more and more excited, and as the lights finally dimmed at 8:30 to the pleasant opening riff of one of their biggest hits, “So Cold,” frontman Ben Burnley was joined on stage by fellow Breaking Benjamin members Aaron Bruch on bass and Shaun Foist on drums, which was a surprise, as the show was advertised as “Ben Burnley unplugged.”

People sang along to every word; Burnley even pointed the mic to them on several occasions to let the crowd take over. Followed by hit after hit, Ben declared that he had some surprise covers he’d be playing. The first was Queen’s 1986 hit “Who Wants to Live Forever,” which, in our opinion, was the best cover of the night. Familiar tunes continued to keep fans elated, including Breaking Benjamin’s first single, “Polyamorous,” as well as crowd favorites “Shallow Bay” and “Give Me a Sign.”

The vocal harmonies Bruch and Burnley shared were absolutely amazing and flawless; they complimented each other throughout the entire show. Before playing “Blow Me Away” from the “Halo 2” soundtrack, Ben and Aaron expressed their love for video games and even gave out their Xbox Live gamertags and shared their personal game recommendations. This was followed up by an acoustic version of Nirvana’s “Smells Like Teen Spirit,” during which Burnley told the crowd that Kurt Cobain and Freddie Mercury were two of his major influences growing up. The song caught the crowd off-guard, but it had everyone singing along.

The covers didn’t stop there. They continued to play recognizable hits like Alice in Chains’ “Would?”, Cyndi Lauper’s ‘Time After Time,” and another Nirvana classic, “All Apologies.” Perhaps one of the biggest crowd reactions of the night came when Ben told the story of how he was sitting on a couch watching “The Wizard of Oz” on TV and how it inspired him to write one of his first songs, “Home.” People really enjoyed the “VH1 Storytellers”-esque vibe that followed most of the tunes.

The last three songs of their set before their encore were “I Will Not Bow,” “Until the End,” and arguably their biggest hit, “Diary of Jane,” which left fans wanting more. Burnley thanked the crowd and particularly acknowledged a 7-year-old girl close to the stage.

“This little girl up front is singing every word; this is awesome!” Burnley exclaimed as he handed the little girl his guitar pick.

Answering repeated chants for “one more song,” Ben and company came back and gave them not one, but three powerful encores – “Breath,” “Sooner or Later,” and the closer, “Rain,” which he co-wrote with Smashing Pumpkins frontman Billy Corgan, sending the fans home happy on a calmer note.

The night didn’t stop there for two fans who flew in from the Netherlands to see the three scheduled acoustic shows, however. When Burnley and crew received word that the two fans were waiting outside in hopes of getting a guitar signed, he immediately invited them backstage to sign the guitar and take pictures with them. He expressed his thanks over and over to the two for making the near 4,000-mile trip.

Not only was the 23-song setlist a crowd-pleaser, but many fans declared that they would also be attending the remaining two acoustic shows in Scranton and Wilkes-Barre the following nights. As we were leaving, we told the guys how great they sounded, and Burnley replied, “I just wanted to do something fun and different for the fans.”

And that he certainly did.