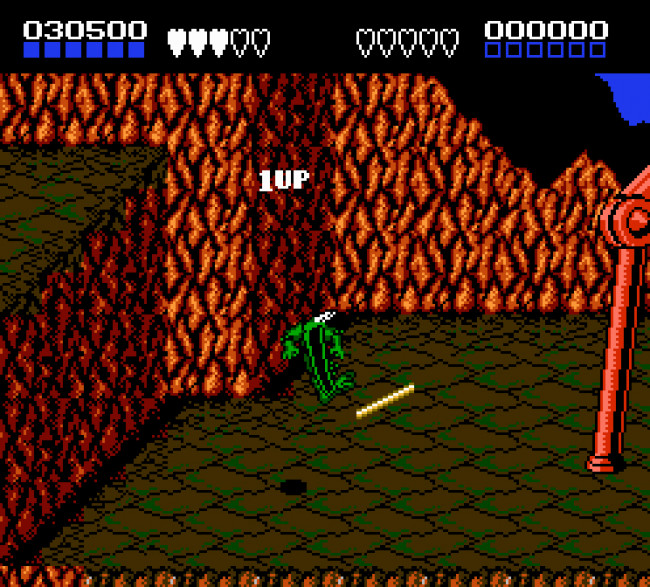 To paraphrase one of the lines from the classic “Rocky” films, the following NES game and subject of today’s Turn to Channel 3 does not need an introduction anywhere in the civilized world. However, it is not as popular as the “Super Mario Bros.” or “The Legend of Zelda” games on the same console. Despite this, it has retained a cult following for many, many years, long after the last game in the franchise’s history debuted.

Spawning several Internet memes and, more notably, infuriating Gamestop employees due to frequent prank phone calls with it as the punch line, this game has become sort of a tongue in cheek part of the retro gaming community. Today, Turn to Channel 3 readers, we are going to take another look at “Battletoads.”

Before I begin, I’d like to take a moment and say that this is going to be extra special for me today because this was the game my cousin Ron and I played as kids, and then, a few years ago, got to introduce to some of the younger members of the family, playing it on the same television we played it on way back when. Without any further ado, it’s time to go on a romp with Zitz and Rash!

The amount of praise Rare, the company behind this title, has received for many of its game soundtracks cannot be understated. Titles like the “Donkey Kong Country” series, “Killer Instinct,” and “Banjo-Kazooie” come to mind, among others, but before all of these classics came to life, “Battletoads” was there first to let us know that, in music alone, Rare was a company that would be a huge part of our video game history.

The level music in this game is this mix of funky, upbeat, grinding chip tune goodness that also makes use of some darker, grittier tones as the game progresses, while still keeping its roots firmly planted in the idea of giving the player a good time as they go through the game. Most importantly of all, however, is the fact that very few, if any, games had music anywhere near as good as “Battletoads” did during the moment you paused the game.

Think about that. Yeah, some games, like “Super Mario Bros.,” had that iconic little sound when you paused the game, but “Battletoads” has this simple, yet addicting beat that makes you want to stomp your feet, clap your hands, or both. It’s honestly sheer brilliance, even after its time, and to further emphasize this, there are musicians who have used that simple little track in making their own tribute to the game.

The sound effects are exceptional as well, with every punch, kick, and weapon shot sounding solid and impactful, along with obstacles like expanding electric fences sounding alive and dangerous. “Battletoads” didn’t have a lot of emphasis on sound effects, but what they had was enough to make the game special.

One of the many reasons this game garnered such mass appeal is because of its cartoon-style graphics – everything from the screens you’d see in between levels to the over-the-top animations of attacks, the giant fists or feet that would send an enemy flying all over the screen. In addition, in situations where our heroes were faced with a great boss challenge, their jaw-dropping expressions carry some hilarious charm with them.

The level designs were fairly intricate and varied for an NES title, and the characters and enemies alike looked great. It’s no secret that the most beloved NES games were those that not only brought great ideas to the table, but also made ample use of the NES hardware capabilities, and “Battletoads” is no exception.

In the same vein as other NES titles like the “Ninja Gaiden” series and “Ghost ‘n Goblins,” “Battletoads” is another great example of what a love/hate relationship is between a gamer and a good, but frustratingly difficult game. I often say that the sheer amount of agony this game caused so many of us as children will never be felt by today’s young gamers, who unfortunately live in an era where game developers have dumbed down games for them to the point of taking them by the hand and spoon-feeding them the essentials. “Battletoads,” on the other hand, gave us an old school WWF arm wrench, flung whatever was on the spoon in our face, just for fun, and then hit us over the back of the head with the spoon until we cried uncle, and yet we came back, time after time, because, frustration to the point of rage aside, the quality of “Battletoads,” the entertainment value, is undeniable.

Are the levels difficult? There are people still trying to get past the jet bike level to this day, but after a week of battling it out in the real world, there are few things greater than punching out an ax-wielding pig warrior or throwing rocks at a giant robot. I still feel the controls in the game, particularly when jumping, are a bit shaky, as your character may plummet to their doom when you swear to the NES gods you timed the jump perfectly, but really, that’s a small matter. The hit detection is pretty good, and the core of the game, the fighting, is easy to grasp and a blast to enjoy. Did I mention this game is hard? Yeah, like our friends across the pond would say, this is bloody hard, gents.

While obvious comparisons and critiques can be made in regards to similarities to the Teenage Mutant Ninja Turtles, “Battletoads” has, in some ways, surpassed their more popular counterparts as far as the NES goes, and if you still doubt the impact of this game on gaming, not only in the past, but today as well, consider this. Recently, Microsoft announced that they had purchased the “Battletoads” license that just so happened to be up for sale, as many speculate what the next entry in the franchise will hopefully be like.

“Battletoads” is a game that can only truly be appreciated to the fullest extent by experiencing it yourself. This isn’t the kind of game you can describe to a friend; you need to do as my cousin and I did, and have been doing for several years now, sitting down and playing Battletoads on an old tube television, hoping that somehow, after all these years, we can still get past the second level. A highly sought-after title, the price of the game continues to rise as the chances of finding a quality copy decrease. “Battletoads” is a game you owe to yourself as a retro gamer to have in your collection, even if you’re not the biggest fan of the NES.

I hope you enjoyed this edition of “Turn to Channel 3” as we begin our trudge through March, keeping the hope for a pleasant spring in our minds. Join me next time as we continue on to another title by the folks at Rare that changed the face of gaming. Until then, remember, this is NEPA and winter is about as much fun as falling on untreated walkways at your local gas station, but we’ll make it through. Stay inside and game on!