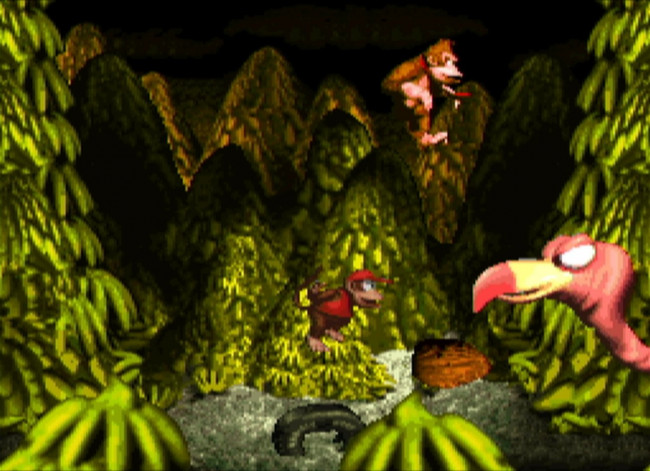 What makes this gig and operating a retro video game shop so much fun is when you encounter customers who share similar stories with you about a game you’re both quite fond of. Furthermore, it’s really cool when you can remember exactly where you were in life when you first heard about a particular game, especially those that changed the landscape of gaming, whether it be in a genre, on a console, or gaming in general. Such is the case for today’s subject matter here on Turn to Channel 3, as we take a look at another masterpiece from Rare – “Donkey Kong Country” for the Super Nintendo Entertainment System.

Released on Nov. 21, 1994 in North America it sold more than nine million copies, effectively making it the second best-selling game on the SNES. What made it so appealing? Was it the superb marketing or did Nintendo just stumble upon something special by chance? Well, we’re going to turn back the clock over 20 years ago (Man, do I feel old!) to see just what makes “Donkey Kong Country” such a beloved and enduring SNES title.

I’ve always believed and wholeheartedly subscribed to the notion that the very best video games we play in our lifetime, whether they’re retro or modern, are those that we can close our eyes and instantly recognize by the soundtrack alone. On the SNES, few other games exemplify this idea more than “Donkey Kong Country.” Even the music that plays for the Rare logo at the very beginning of the game is something so many gamers remember.

Of course, then the game lets you know that you are playing the evolution of “Donkey Kong” games as the classic arcade tune greets you before turning into this modern twist of funky beats. As you go from one level to the next, the map music is cheerful, upbeat, and keep you moving. The jungle beats in levels are pretty standard, but it is almost like standing on top of a steep hill before rolling down it with great speed; each time a new level song comes into play, it gets better and better.

Certainly there are those who can argue that “Donkey Kong Country 2: Diddy Kong’s Quest” has better music, and I’m not against that argument, but to discredit this soundtrack would be a huge mistake. “Aquatic Ambience,” the tune that plays during every underwater level in the game, is one of the most peaceful, somber, and breathtaking pieces of video game music I have ever heard.

If a soundtrack that includes these tunes, as well as the superb snow level and later factory levels, isn’t enough for you, the enemies and obstacles you encounter in the game all have some great sounds to accompany them as well, as bees buzz and gators of various sizes cry out as you hit them – some so large that they laugh at your feeble attempts to take them out. Vultures squawk as you send them on their way, and other primates send barrels flying at you at increasing speed as snakes hiss as they meet their doom. The soundtrack of this game sets the tone and the groundwork for what is among the more complete SNES titles on the system.

In 1994, I, along with a whole host of fellow gamers, stared at our televisions and video game magazines in awe of what we saw graphically with “Donkey Kong Country.” It was like nothing we had ever seen before! These were graphics that, yes, when you strip down all the bells and whistles were 2D graphics, but they looked like no other 2D graphics before it. These were not the flat, boring style of graphics that we were used to. You had levels with detail and flash that was neither subtle nor outrageous; it was just beautiful to look at.

You have levels with rain and snow that further immersed you in the game you were playing. Some levels even turned the lights on and off! You had enemies with character and personality, from armadillos that would laugh at you as you tried to take them out to buffed up alligators that would mock you if the smaller Diddy Kong tried his luck with them. You had bosses like giant vultures, bees, beavers, and even a big oil drum!

Donkey Kong himself was no longer this flat little 8-bit sprite, but this colorful and innovative character who, along with Diddy Kong and other members of the Kong family, helped get you through the game. These were graphics that made you think you were looking at 3D, even though you later learned you weren’t. Even when you did, you still respected the effort put in. Better graphics in video games would come soon enough, but “Donkey Kong Country” was a glimpse into the future in a way, and the future was definitely bright.

There’s no question that “Donkey Kong Country” is a fun game to play, with hidden secrets, great level design, and engaging characters and enemies that keep you coming back for more. There are levels that are very challenging and some hit detection and jumps that are a bit questionable at times, but nothing you wouldn’t find in other SNES titles of the time.

Games of this era were challenging, but the ones that had high replay value were those that were challenging but never to the point of annoyance, to the point where you’d put the controller down and vow never to play the game again. “Donkey Kong Country” is a game that knows when to amp up the difficulty, but also when to reward you for your dedication to the journey you’re on.

Whenever someone either has an SNES or is looking to buy one in my store, one of the first games they always seem to mention from their childhood is “Donkey Kong Country,” and that’s with good reason. Not only is it truly a blast to play, but it was so heavily marketed in the ‘90s that you swore everyone was going to get a copy just for being born, like “Frampton Comes Alive!”

If you remember waiting in line at Sears just to get a glimpse of this game or watching the VHS tape that told of the making of the game, then you know how important this game is to not only the history of the “Donkey Kong” franchise and Nintendo, but to gaming as a whole. Relatively inexpensive and pretty readily available, “Donkey Kong Country” is a game that belongs in any serious SNES gamer’s collection.

I hope you enjoyed this edition of Turn to Channel 3 and our look back at “Donkey Kong Country.” The next two editions of this column will feature a look at two arcade classics that kept old school wrestling fans pumping quarters into the cabinets at their favorite local arcades.

Until then, keep thinking of spring, and remember, even if you’re not Irish, you can still be lucky enough to enjoy some classic gaming! Game on!