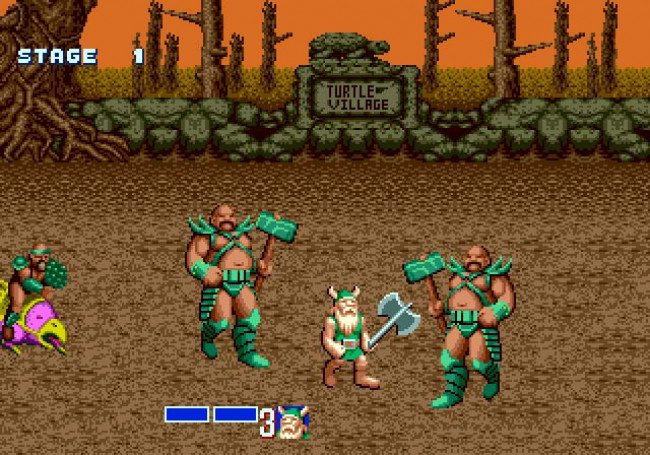 Everyone has their favorite systems and favorite games they grew up with, while at the same time, there are those systems and games we never got into, and even today we’re still overly critical of them. As some readers may know, I didn’t grow up with a Sega Genesis, and despite the fact that I enjoy the follow-up consoles – the Sega Saturn and the Sega Dreamcast – quite a bit, other than going to the house of a neighbor who had one, I rarely played it, and I only vaguely recall the games they had in their library.

That being said, despite my criticisms of the Sega Genesis, at the end of the day, as both a business owner and someone who is very passionate about the general subject of retro video games, I call a spade a spade when I have to, and appreciate a good game regardless of what console’s library it belongs to. Today, we’re going to finish up the month of March here on Turn to Channel 3 with a look at one of the first games I ever played for the Sega Genesis – the original “Golden Axe.”

Sharpen your blades, warriors. It’s time to go to battle!

As someone who didn’t grow up with a Sega Genesis console, I am probably one of the most critical of the sound coming from the system with most of its games. At times, it has this wonky, unappealing sound in comparison to other consoles out there. Most stalwart defenders of the Sega Genesis don’t know what I mean by this or how I could be so bold as to insult their precious console. However, I have come to realize this isn’t true of every Genesis game out there, although there are times in “Golden Axe” where this is quite evident.

In the grand scheme of things, though, “Golden Axe” has a pretty decent soundtrack, with the most notable being the in-between stage music and, of course, that all-too-jovial tune that plays as you punt little gnomes around for food and magic potions. I do feel the sounds of an enemy dying or townspeople screeching are a bit scratchy and too loud for my taste, but the sounds of an enemy hitting the ground or the smacks and swipes of a weapon really suit this game well.

By today’s standards, the graphics in “Golden Axe” seem pretty bland, but for the time, they were detailed enough to stand out among the crowd. While the levels weren’t anything genre-defining, they were just enough to give the game some variety.

Sadly, with a few exceptions here and there, the same couldn’t be said for many of the enemies in the game. Yes, the bosses were all pretty cool, but the fact that in most cases, enemies just differed by color lacked some originality in my book. As cool as your characters looked, I found the monsters you could get on and ride were the best creations and displayed the overall fine graphics work in this game.

There’s no denying the fact that “Golden Axe” is a fun game to play and rightfully brought out gamers in droves – mostly those who were tired of the usual genre clichés of fighting on the streets using roundhouse kicks and throwing weapons at your adversaries. “Golden Axe” brought a fresh new look to the genre, with things like magic attacks you could build up, as well as the restoring of health and magic in between levels.

While I do find some enemy attacks really cheap, such as knocking you off a monster or just the whole running headbutt thing as a whole, “Golden Axe” feels like a journey from beginning to end, and it is one that, most of the time, I didn’t mind going on. Unlike a lot of brawlers of this sort or otherwise, “Golden Axe” leaves you feeling like you accomplished something at the end, which is absent from other classic entries in the genre.

“Golden Axe” was one of those first games on the Sega Genesis to let other companies know that Sega was serious about being a contender and more about the adult demographic, as it related to their marketing strategy at times. Sometimes, when one looks at the overall Sega Genesis library, it is easy to get lost among the “Sonic the Hedgehog” games and others more synonymous with the system, but “Golden Axe” will always be that game that introduced a lot of gamers to the console upon its debut, and it is still a game that a lot of Genesis owners turn to in order to show their friends what they missed.

In a lot of ways, “Golden Axe” changed the way we looked at beat ‘em ups, and for the better. It may not be the best Sega Genesis game in the console’s library, but it is a prime example of what the console could do if given a well-made game to be placed in its cartridge slot.

Well, this marks the end of another great month here on Turn to Channel 3. Whether you look at the month of April as a great month will be quite the matter of opinion. For next month, in the spirit of April Fool’s Day, we will be looking at some rather lighthearted and, well, let’s just get on with it – some truly terrible games, if in this writer’s opinion only. For those of you used to me recommending games to you, use caution in avoiding the majority of April’s review topics.

Until then, I hope you enjoy your upcoming Easter holiday and get ready for some truly rotten eggs right here on Turn to Channel 3! Game on!