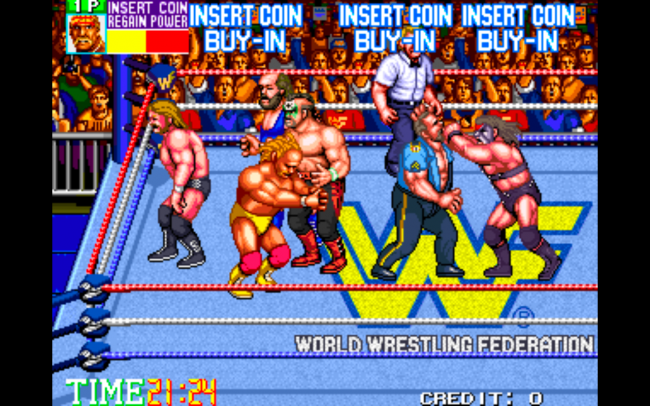 While there are certainly a lot of practical reasons for someone to like a certain video game or, in this case, an arcade game – everything from the graphics to the music, or even the gameplay – I feel what is often overlooked are the memories you have when you stop to think about a game.

Maybe you remember what snack food you used to eat when you played the game, or even what arcade or store you’d play the game in, and chances are when you remember those things and that game, it puts a satisfying smile on your face you wish you could have again. These are the types of things that form great communities of like-minded people – people who seek out those memories and those feelings that only video games can bring us.

I can remember it all so vividly. For those of you who do remember, I applaud your vast memory. For those of you who won’t, I am saddened by the fact you were not around to experience what we did. For when I was but a young lad, there was a wonderful department store in the Keyser Oak Shopping Center in North Scranton known affectionately as Woolworth’s. Gerrity’s Supermarket now sits where this amazing childhood memory used to be.

Man, Woolworth’s had it all. You could get video games, electronics, and music as soon as you walked in the one set of doors on the left. You could get birds, fish, and toys, especially those invisible ink activity books that I loved, and of course there was the restaurant inside, which for my money had the best hot dogs, grilled cheese, French fries, and chocolate milkshakes in town. I can still remember eating lunch there with my grandmother, who was a frequent shopper in that store. Right by the other set of doors, however, sat an arcade cabinet of today’s Turn to Channel 3 topic, “WWF WrestleFest.”

Now then, for those of you who don’t know, on top of being a big video game nerd, a book nerd, and pretty much obsessed with old cartoons and toys of my youth, I am also a pretty avid wrestling fan. This is why I would bug my mother or grandmother for change every time we came into Woolworth’s, because I would stand at this cabinet for hours. Many years later, I had the privilege of playing this game on my MAME emulator, and I’ve done so again today so we could climb into the ring with “WWF WrestleFest!”

For an arcade game, and arguably one of the best wrestling games of all time, “WWF WrestleFest” doesn’t really dazzle you with a soundtrack. The entrance themes of the wrestlers aren’t even provided here, which would have been a nice touch in itself. The music that is there I would consider pretty generic, and the other real sound effects are the vocals of the ring announcer, Mean Gene Okerlund, and the Legion of Doom, none of which sound like the genuine articles you would see as a kid watching wrestling on television.

The saving grace here is the action sound effects, combined with the boos and cheers of the crowd, but despite this, I would consider this category the weakest part of “WWF WrestleFest,” which is a real shame.

When WrestleFest was in the arcades, most wrestling games featured small sprites that didn’t even remotely look like who they were trying to portray. In the case of this game, we were treated to some much larger sprites that did a pretty good job of pulling off the characters they were based on. In addition, we were also given character selection screens and little animated boxes when a character was going to come to the ring during the Royal Rumble mode, which was another nice touch.

The ring is huge, and we even get a nice shot of the outside of the ring totally separate from inside the ring. I really feel this helped give a wrestling fan, and even a casual gamer who didn’t watch wrestling, an immersive environment they could latch onto, which was something missing from a lot of wrestling games at the time, especially those on the home consoles of the era.

The game features a Saturday Night’s Main Event mode, which focuses on tag team wrestling as your team makes their way to a tag team title shot, then defending it, and a Royal Rumble mode, where it is every man for himself to see who is left standing tall at the very end. So while overall options for the gamer were limited, the sheer amount of choices in terms of what wrestler you can use was unlike any other game at the time; all of them have their own distinct move set, including their trademark moves and finishers. It’s still a blast playing through with each character and creating dream teams that either did happen in wrestling or you wish happened.

Certainly there’s enough of a valid argument to make that better wrestling games would come after the appeal of “WWF WrestleFest” was long gone from the glory days of arcades, but I think it is also safe to say that, without it, some of the wrestling games we would later take for granted, like “WWF No Mercy” on the Nintendo 64, would never come into being.

What was done here was so unprecedented for the time, and it brought out wrestling fans in droves to play it after spending so many years playing WWF wrestling games that really were severely substandard in comparison. This just goes to the show you what many of us knew even as kids. Something as action-packed as professional wrestling couldn’t be contained on a single cartridge on a home console – it needed the space to stretch out and entertain us, and only an arcade cabinet was capable of giving us what we wanted. Despite some flaws, “WWF WrestleFest” delivered that to us, and then some.

Thank you for tuning in, but we’re not leaving the squared circle just yet! Join us next time as we take a look at another arcade wrestling game that brought us away from the home consoles and into something that would stay with wrestling fans for many years to come.

Until then, this being St. Patrick’s Day, I hope you find that four-leaf clover you’ve been looking for, and remember to always game on!