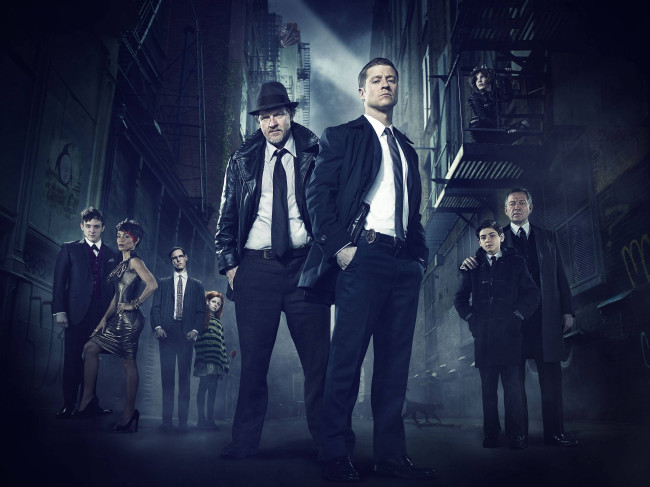 My personal motto when it comes to the world of superheroes has always been, “Make mine Marvel.” The one exception has always been Batman. It is pretty hard to screw up Batman in my eyes. Comics, movies (although Joel Schumacher came pretty damn close with his movies), cartoons, videogames – Batman is arguably the one hero that DC has a good handle on. When Fox announced that they were going to make a Gotham-based TV show focusing on Jim Gordon and the origin of Batman’s mythos, though, I became nervous, and for good reason.

Fox has a long history with mismanagement of high-concept programs. The ails of “Firefly,” “Dollhouse,” “The Tick,” and “Almost Human” (to name a few off the top of my head) are well documented, and tackling the origin Gordon, Bruce Wayne/Batman, the rogues gallery, and the entirety of Gotham City is about as high-concept as you can get. A high-concept show on Fox should have me worried in general – make that a show about something that I love and now I am terrified!

Nevertheless, I was also cautiously optimistic about “Gotham.” I really wanted it to succeed so much because the idea of seeing the evolution of all those characters, the changing city, sounds absolutely amazing! Well… I have been watching since the premiere episode. I may have missed one or two along the way, but I feel that I have watched enough to formulate an objective opinion. It isn’t bad, but it isn’t entirely good. There are minor problems, but those minor issues have been mounting since the beginning, and they have been building up awfully quickly.

First and foremost, there are a lot of things that “Gotham” has gotten right. The dynamic of Jim Gordon and Harvey Bullock, played by Ben McKenzie and Donal Logue respectively, is really well done. The paragon of good cop partnered with a corrupt cop was sound; it is literally the good cop/bad cop paradigm every week. Eventually, they warmed up to each other to the point of supporting one another. This bond needed to grow and develop for the show, and it has worked out. Gordon’s evolution within the police department has been well-paced as well.

Oswald Cobblepot, a.k.a. the Penguin, and his rise to notoriety, is another main selling point. Being able to see his rise to power, and his various machinations, makes for compelling television. He is nowhere near what one would expect of the character. Then again, this is a Penguin most would be unfamiliar with from various forms of media. His development has been consistent and very interesting. He is arguably the best acted and, beyond Gordon and Bullock, the best casted character on the show. Robin Lord Taylor is one of the main reasons I continue to tune in. Speaking of criminals, the feuding mob families are another interesting component to the show. Considering how racked with corruption Gotham is, being able to see the actual polite war between the families is fascinating.

Watching Bruce Wayne’s obsession begin to take root has also been absorbing. We know that the murder of his mother and father affected him greatly. For those of you who are not as familiar with the character and psyche of Batman, that last sentence of mine is an enormous understatement! This is a person who will commit his entire life to cleaning up his city by any means necessary (excluding the act of killing) while dressed as a bat, using military-grade (non-lethal) weapons and vehicles, after mastering every known martial art and becoming the world’s greatest detective.

In “Gotham,” we see his obsession with corruption and crime from the show’s onset. To become the person he will become, Bruce’s sense of justice would need to have started extremely early because, hypothetically speaking, and that obsession would need to reach mammoth proportions for him to reach the conclusion to become Batman. We have been witnessing that since the first episode. Granted, we have been seeing this through the so-so acting of David Mazouz. I can’t really blame him too much, as he doesn’t have a large body of work.

So yeah, there are good things going on in “Gotham.” Unfortunately, for every positive, there is a litany of small complaints that just keep piling onto one another.

Now for the fun part! While I have been watching “Gotham” since its premiere, I have been doing so with gritted teeth. That first episode had me yelling profanities at my television for the entire hour! From Bullock ridiculing Edward Nygma because he doesn’t have time for “all his riddles,” to meeting a young plant-loving girl named Ivy, it felt as if the showrunners were bashing every single possible Batman reference directly into the viewers’ faces!

“He has riddles? He must totally be the Riddler! And that girl named Ivy… I bet she becomes Poison Ivy when she grows up! Oh, oh! And that young girl who wears all black, has goggles on her hood, and tells everyone to call her “Cat”… she is definitely going to be Catwoman.” The audience isn’t a bunch of fucking idiots! They will be able to put two and two together through storytelling alone. Give the audience some credit and don’t treat them like a bunch of amoebas. Honestly, they are smarter than you (producers, writers, and showrunners) believe them to be. They even had a comedian in Fish Mooney’s nightclub, to which she commented that “he’s a real joker.” ARE YOU FUCKING KIDDING ME!?

Oh, Fish Mooney – there is another sore spot for me. It isn’t the character that irks me. It isn’t the fact that I somehow believe women can’t possibly be strong and powerful people in a male-dominated city that has me pulling my hair out; I think having a strong woman holding status in the crime world is pretty damn cool. What has me absolutely insane is how Jada Pinkett Smith “Eartha Kitts” her way through each and every single scene she is in. For the uninitiated, Kitt played Catwoman in the “Batman” series from the ‘60s. Smith’s portrayal of Mooney is a caricature of Ms. Kitt, right down to her speaking style and mannerisms.

The biggest complaint I have with “Gotham” is the same reservation I had when the show was originally announced – if all of these villains are present and active, albeit at various levels, then at some point Batman will be beating up elderly villains. I am going to try and make this explanation as simple as possible; i.e. please bear with me here.

Bruce Wayne’s age has never been disclosed to the viewers whatsoever. Let’s assume he’s the same age he is in the comics when his parents are murdered: roughly, 12 years old. The Penguin is just starting his rise to power, so we can say he’s probably in his early to mid-20s. We have Nygma working as a low-level medical examiner for GCPD, and he looks to be about 19 years old. He’s friggin’ brilliant, too, so it’s completely logical for him to get out of college and into that position at such a young age. Harvey Dent, the future Two-Face, is already a District Attorney, so he has to be in his late ‘20s or early ‘30s. Zsasz, a hit man who keeps tally of his kills by carving them into his flesh (not the comic origin whatsoever, but whatever – it works in this case), is already active and looks like he’s around his mid-20s.

If Bruce creates the Batman persona after he graduates from college, and after a few years of cultivating those fighting and detecting skills, he has to be at least around 25-27 years old when he dons the cape and cowl, so that would make his villains at least 12-15 years older than what they are now. The Riddler would be in his early 30s, Penguin would be in his mid-to-late 30s, Dent would be in his early 40s, and Zazaz would be in his mid-to-late 30s as well. And remember, folks, Batman’s appearance doesn’t happen because of these super villains. All Bruce/Batman wants to do is clean up the streets of his city. The supervillains in Gotham, however, these villains are a direct result of Batman himself. Numerous sources have stated that he is the reason that this new type of criminal exists. So, technically, it would be a few years after Batman emerges before these criminals should even become the rogues gallery we know and love. Regardless, by these timeframes, Batman would be beating the ever-loving shit out of people 15, 20, possibly even 25 or 30 years his elder!

I can actually go on, but I’m going to stop before everyone reading this completely tunes out, if they haven’t already. All in all, there is just too much shit going on at once: too many characters, too many storylines, too many subplots, and too many characters to focus on! There is so much happening you could miss one or two episodes and still be able to follow the overall story arc of the show. You know, like a soap opera. A friend commented that they’d be able to have two separate shows – one police procedural on the GCPD and one on Gotham’s underworld. He’s absolutely right, too, but he, like me, is just someone who has seen the missteps that have been taken.

As I stated previously, it isn’t a bad show; I can’t reiterate that enough to you. That being said, if you know the characters prior to tuning in, you will be throwing your arms up repeatedly in frustration throughout each hour of the show. What’s worse, with only three episodes left, there is little that can be done to improve these problems now. I do feel that there is hope in the future come season two… hopefully. Hopefully the little nuances that make “Gotham” enjoyable will continue to grow. Hopefully the acting here and there will improve. Hopefully the writers can find a way to better balance every damn thing happening. And hopefully Fish Mooney gets killed off so we will no longer be subjugated to Jada Pinkett Smith’s awful fucking Eartha Kitt impression!