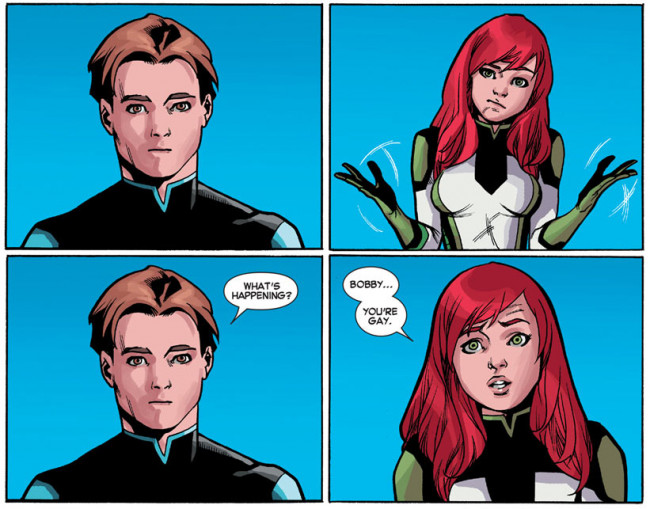 “Have you tried not being a mutant?”

This was one of the best lines in the 2003 film “X2: X-Men United,” making the general metaphor even more obvious in the “X-Men” sequel. Bobby Drake is “coming out” to his parents about being a mutant when his mother poses this question, serving as both a nod to LGBT issues and a knock at the awful argument that people can choose to be gay, as it’s quite obvious that Bobby cannot help his genetic mutation that allows him to lower his body temperature and freeze the moisture in the air at will.

Director Bryan Singer, a gay man, has always seemed to identify with the X-Men on this level, so when it was revealed last week in issue No. 40 of “All-New X-Men” that Iceman is actually gay, it seems this 12-year-old scene was not only symbolic, but a bit prophetic as well. This was not lost on Singer, who appeared amused by this in an interview with Entertainment Weekly, noting that while this was a coincidence and unintentional at the time, Bobby “develops a relationship with a girl who he is physically unable to touch. There’s something subtextual in that.” He continues:

“That was always something very specific about the X-Men, which related to the LGBT community. You’re born into a family or a neighborhood which you do not identify with. A person of a certain religion or race is born into a community of similar faiths or physical attributes. But an LGBT person is born into a world – to use the example that X-Men uses – like a mutant. And of course the parents aren’t mutants, the brothers and sisters might not be mutants. And they feel a unique kind of aloneness. I’ve always felt it made sense to include that in the comic universe.”

That scene in the movie, by the way, ended with his little brother calling the police and a battle ensuing right on their front lawn. Imagine if he had come out as gay as well.

Some fanboys reacted just about as poorly when they read the news that the comic book character, who had chased and dated women from his debut in 1963 up until the present, was “outed” in a conversation with Jean Grey, who read his mind and discovered the truth. Some of this reaction was homophobia, which has absolutely no merit and can be dismissed as easily as it is typed (typically misspelled and in all caps), but many argued that you can’t just change a character like that after years of straight continuity, to which I must reply, “Have you ever tried not being an idiot?”

I’m not always a fan of writer Brian Michael Bendis, but he didn’t just pull this revelation from thin air and hit us with it like a ball of ice. As Comic Book Resources pointed out, there have been hints over the years that Bobby could be gay, though the biggest hint might have been the unspoken one – none of those previous relationships ever worked out. Even if they did for a while, there are plenty of men out there in everyday life who tried to fit into societal norms and date women before realizing they were gay. Hell, some even married women and had children before discovering or coming to terms with their sexuality. This isn’t anything new.

Neither is this situation for comic writers. Fans demand fresh, entertaining stories that take chances and don’t repeat the same old adventures month after month, yet at the same time, they’re often resistant to change and can’t stand when a writer shakes things up because it messes with their perfect vision of that character. I will concede that sometimes, particularly in the case of Marvel or DC Comics, a writer will make a major change (even temporarily) simply to sell books or attract media attention, which is a stupid but seemingly inevitable part of this business, but I believe Bendis when he told CBR that that wasn’t the case this time:

“Here’s the thing, and some will believe me and some won’t. I think if you really paid attention to the solicits, we mentioned nothing about the subject. We didn’t do a cover asking, ‘Which X-Men is coming out?’ We didn’t do anything like that, because we agreed that it was best to let the story speak for itself.

We just wanted it to be about Bobby and Jean and their very unique experience, which I thought was worth looking at. So there was no pre-hype. There was no tease of any sort. There wasn’t even a hint to retailers saying, ‘Keep an eye on this issue.’ We were just going to let it play out on its own merits.”

Character deaths in comics published by the “Big Two” are utterly pointless because they will almost always be resurrected, thus negating any impact the writer was hoping to make. Death is supposed to be sad, powerful, and important, so I can understand fan backlash when characters like Wolverine, who are simply too popular to truly die, are “killed off,” only to return when another writer takes over. Sexuality, however, is fluid, changing, and oftentimes complicated, especially in 2015, when the public conversation is more open than ever, though overall public comprehension hasn’t exactly caught up yet. If anything can believably change in a character, it’s certainly his understanding of himself.

This is what we call character development, and if writers aren’t allowed to exercise it, then what are these characters supposed to do, sit around and play low stakes poker all day? Some of the greatest X-Men stories of all time, like the Dark Phoenix Saga, involved major changes to the status quo, including deaths, and while I’m sure they were shocking at the time, they’re worshipped as untouchable canon now. When does a storyline reach that threshold? In 20 years? 30 years? 40? When does it become acceptable and brilliant rather than controversial and reversible on demand?

In other words, can we please just let the writers write? I’ll defend necessary continuity and criticize out-of-character actions when I read them, but Bendis and subsequent writers are completely right to pursue this subplot with Bobby Drake. It not only fits the character, but it’s completely in line with what the X-Men have always been about – representing the unrepresented. In the ‘60s and ‘70s, this was an issue of race, and judging by recent events in this country, it’s no wonder why these comics have remained relevant all these years. Now this message has extended to the LGBT fight for acceptance, and rightfully so.

I was considered both a “freak” and a geek in school, which is why I identified with the X-Men so easily at an early age. If I was gay too, I can’t even imagine how much harder those years would have been, so hopefully some young man or woman will find the same comfort I did in those pages. As with all things X-Men, this particular story is a bit complicated, as this Iceman is a younger version of the character who time-traveled to the present and coexists with the older “straight” Bobby, but that’s a continuity debate for another time. What’s important is that he’s tried not being gay, and it resulted in the same old story for over 50 years now. Let’s let this one play out and see what happens. We may all be defending it as integral canon someday.