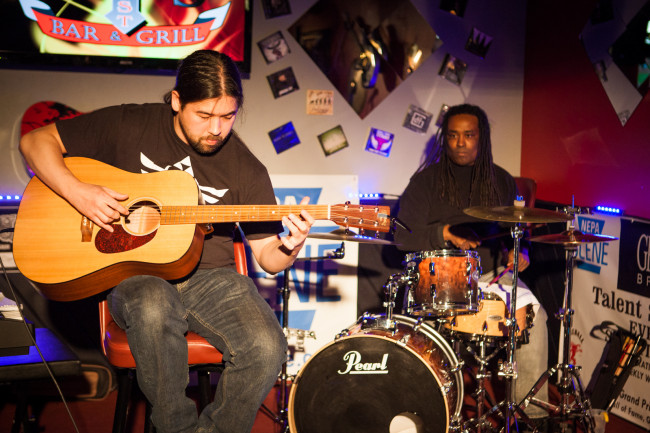 Every week of NEPA Scene’s Got Talent, our free open mic and talent competition at Thirst T’s Bar & Grill in Olyphant, we feature a quick Q&A with the latest audience vote winner, which was guitarist Jason Vo and drummer Bryan Banks on April 21.

JASON VO: I’ve been attending the event for a few weeks. I heard it about it from Vinnie over at V-Spot and another friend of mine, so I thought I’d give it a go. Also, Thirst T’s is awesome!

JV: I’ve been playing guitar and bass guitar since I was about 14 or 15. I spent time on other instruments before that. I also played orchestra bass a while and have been doing percussion seriously for about nine or 10 years.

JV: Well, as I was said earlier, I started around when I got into high school. I used to attend a youth group regularly at the Green Ridge Assembly of God and was always surrounded by people playing the guitar. I really liked how it sounded, but back then, it was more of an electric fascination with me.

I got started when I went to where my dad worked; it was a construction company. I saw a broken guitar, and I mean a completely dismantled one, and said to my dad I really wished I had one. A few days later, I came home and there it was all put back together; my father’s a really great craftsman, albeit not a musician. My grandfather was a musician, though, having played country music growing up. He tuned it up for me, showed me a few chords and all that. I got a chord sheet and would just talk to other people and learned worship and praise music at my church. It was a lot of fun, and I just kept branching out.

I got into percussive fingerstyle around the time the YouTube explosion happened. I liked people like Michael Hedges and Phil Keaggy, but Andy McKee’s “Drifting” video and CandyRat really brought that kind of music to the forefront with modern audiences.

BB: I had a little play set when I was 6 or 7 years old, but never played; I didn’t really start playing until after high school.

BB: A little bit of both.

JV: It’s a little of A and B. I would write my pieces with a certain mood or idea in mind. Sometimes they just come to me or work themselves out initially and I fine-tune them. My primary goal is that when someone listens to the piece, they really feel it. I want them to be moved by it, to go somewhere else in their mind and just connect. I love playing and composing. I am trying to make a career out of this; playing live is a strong suit of mine and I love everything about it. Playing, traveling, meeting people, and touching them with my music is awesome!

JV: Excitement, of course! I’ve been there for a bit now, and competition is pretty rough. I see all sorts of talented players and people just come in and rock it. It’s an honor and a privilege to be voted into a win.

JV: I think I’d like to say that people really felt the music. After Bryan and I got synced, especially after the first song, I think the audience really felt it. There came a moment where I literally didn’t hear anything except Bryan and I, and I looked up from the fretboard and saw every eye glued to us. I work hard at composing my pieces, and I think people really just dug it that night. Also, Bryan is freaking ridiculous on the drums!

BB: I believe they appreciated the originality of the compositions.

NS: Do you perform live in front of an audience regularly?

JV: I perform at a lot of open mics in the area. I frequent Duffy’s Coffee House, Legends Saloon, Waldo’s Tavern, and sometimes stop in at other venues in the area like V-Spot, Andy Gavin’s, Oak Street Express, Stonehouse, Lyrics, O’Malley’s, Suzie’s, Irish Wolf Pub.

I just performed with Jimmy Johnson for a youth rally in Newton for Country Alliance Church with Drew Sr. and Jr., and Sue Yurkanin as well as Brian and Karissa Kellet. Jimmy, Bryan, and I also just did a show over at Duffy’s. We have a show for the Campfire Music Series coming up in June, and a feature spot over at the Dietrich Theater in Tunkhannock at the end of June as well.

I’m still looking for more venues to book our kind of music. I tend to play out in public a lot as well, at parks, bookstores, and cafés, whatever. I just love to play!

BB: They can check me out online for updates.

JV: I am in the middle of updating a lot of material on the sites, but I can be found on Facebook, Twitter, ReverbNation, and YouTube!

To see photos of all the performers from last week’s event, including Vo and Banks, click here. For more information on NEPA Scene’s Got Talent, which is always free and open to anyone, click here.