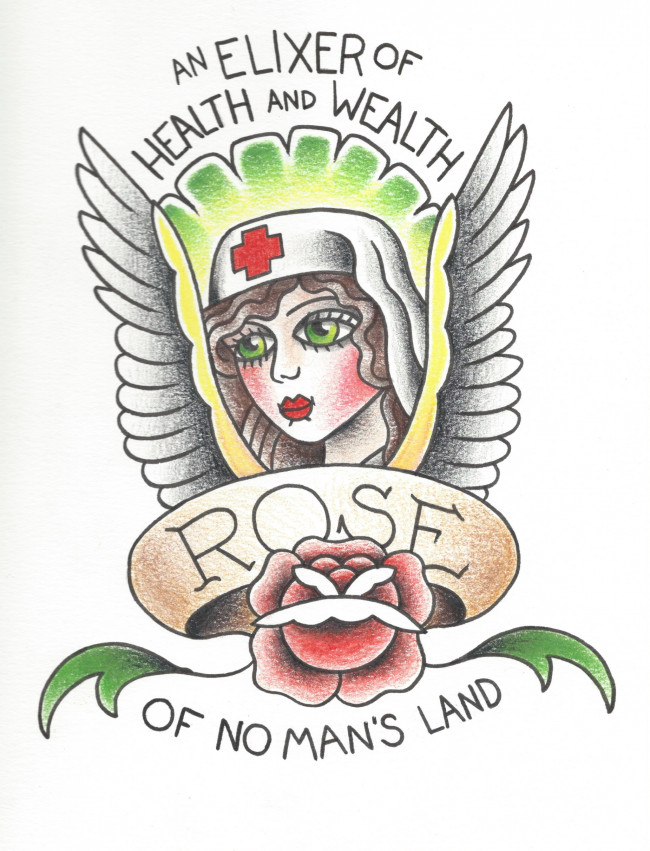 “Mid the War’s great curse, Stands the Red Cross Nurse / She’s the rose of “No Man’s Land.” / Out of the heavenly splendour / Down to the trail of woe / God in his mercy has sent her / Cheering the world below; / We call her “Rose of Heaven” / We’ve learned to love her so,” the lyrics read.

“Veterans would get the tattoo to pay homage to nurses that would have helped them during the war, who brought them back to life or kept them alive or amputated a leg – anything, really. It’s a really nice tribute tattoo, and there’s always a beautiful rose that’s incorporated within it, so we use rose hips in the beer to really tie everything together,” Johnny Waering, head of sales and marketing at 3 Guys and a Beer’d, explained.

While the beer, which will have the taste of sweet orange peel mixed in with the rose hips, will only be available on draft at the convention, running from April 17-19 at the Hilton Scranton & Conference Center, future plans to bottle it include a label featuring tattoo artwork from Elijah Birtel of the Electric City Tattoo Gallery, shown above.

This isn’t the first time that the Carbondale-based brewery has partnered with another local business – Loyalty Barber Shop Shaving Cream Ale was inspired by the local shops in Archbald and Scranton and feature their logo on the label. All three businesses are linked by a distinctive look, style, and friendship that extends beyond their creative professions.

“Everything just flows together. We get along with everybody within the industry. The Loyalty Barber Shop guys, we’ve known them for a long time,” Waering – better known as “The Beer’d” – said of these partnerships.

See a full schedule of events at electriccitytattooconvention.com.