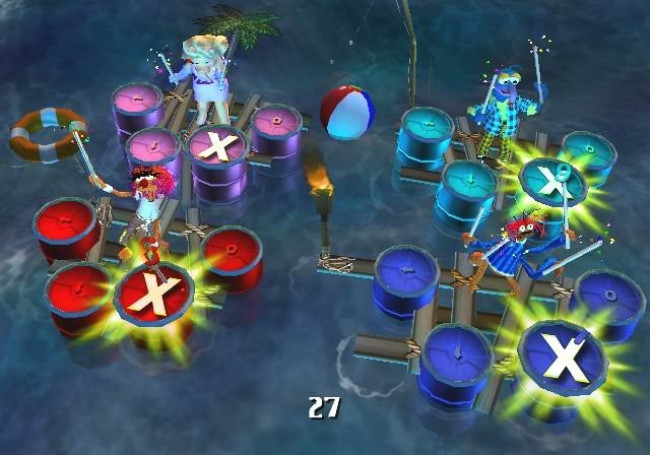 So let’s all take a deep breath and appreciate the fact we’ve made it through 30 days of zany and, at times, truly horrible games during Foolish Games Month. I assure you the games will get a lot better after this, but we still have the task of finishing up the month of April.

Thankfully, this last game isn’t too bad, if only on my opinion alone. Today, we are covering “Muppets Party Cruise” for the PlayStation 2, a game that kind of snuck itself into my collection and has had mixed results when playing with friends. So without further ado, let’s join Kermit and the gang on the “Muppets Party Cruise!”

The honest truth about the soundtrack of this game is that, while not terrible, this is yet another case of a game this month not offering enough variety as far as the soundtrack goes. What seems to have become quite common in games featuring a brand like the Muppets in it is that developers think the name alone is enough to attract gamers, without really caring about the content of the actual game. Sure, the music is upbeat and definitely fits well with the theme of a party cruise, but the thing is, after a short time, you become really annoyed hearing the same couple tunes over and over again, as even the mini games offer little relief in the bland music selection available. While the voice-overs are a big plus in this game, the fact is even they get repetitive after a time, and I’ll get into why in just a bit.

You expect the Muppets and get some really stellar depictions of them, and while that’s great, something seems to happen to them when they hit the game board that makes them almost seem like the person controlling them behind the scenes is drunk as they bumble around and seem to get overly animated at times when it makes no sense to; other times, they just plod along, almost blindly had it not beeen for the player selecting the direction. I think if they added movement that worked well with each character, making some dance, strut, or what have you, this wouldn’t seem like the Muppets got some kind of disease that made them into marionettes or something far more annoying. The boards look pretty much the same, with few variations to set them apart.

The more I have played this game, the more I realize every category I review suffers from the same theme: a complete lack of variety. There are a fairly decent number of mini games; however, if you need a certain amount of colored streamers, you may have to play some mini games over and over until you can snag that streamer that was originally obtained by another player, or worse yet, the ultra cheap AI that will do whatever it takes to hang onto it. I found this incredibly frustrating because the one streamer I always needed seemed to be in a mini game I was terrible at.

You’d also think, or at least hope, that with each board being a different level of the cruise ship, there would be different mini games on each one but, sadly, this isn’t the case. I did like the addition of other characters that alter things on the board, but some always seem to target the lead player, and if that’s you, it’s like dealing with the dreaded spiked blue turtle shell in the “Mario Kart” franchise.

Longtime fans of the Muppets will find this party game cute and amusing, for a little while at least, until it becomes painfully obvious that the whole idea of replay value gets tossed right out of the window. What has made party games so enduring in years past was the fact that, as we can all talk ourselves into playing “Monopoly” even though it takes a long time to finish, we do it because the outcome can be different, but in the case of “Muppet Party Cruise,” there’s nothing there to make you want to endure the torture of finishing the game. If you’re someone who grew up with “Mario Party” and similar games, you’re going to be sadly disappointed here, which really stinks because, unless you’re Statler and Waldorf, you won’t be expecting disappointment from most things that involve the Muppets.

We made it out of Foolish Games Month. Join us next time as we begin the month of May, which will be Nick’s Faves Month. On May 1, your favorite NEPA Scene scribe (come on, admit it) will be turning 34. Until then, take care, and remember to always game on!