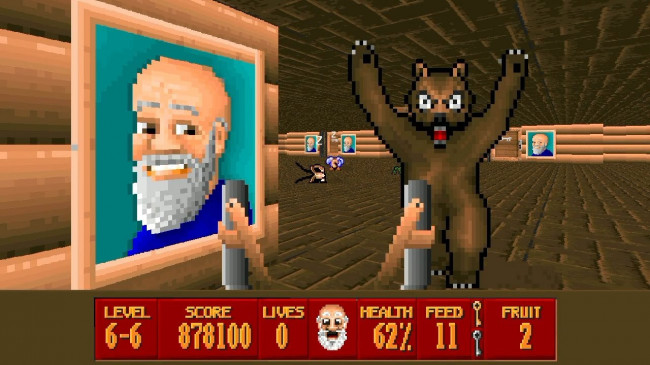 I just wanted to take a moment to say how proud I am of you, our loyal fans, for surviving “Bible Adventures” with us last week. I know it was tough, but you guys and gals showed some serious courage, so “Big Hero 6”-style fist bump via the wonders of the Internet to each and every one of you. Sadly, though, like any difficult journey, we aren’t out of the woods yet during Foolish Games Month on Turn To Channel 3.

For those of you who may have been offended by the game we covered last week (and I’m referring to the fact that it was horrible, not the fact it was a religion-themed game), I hate to tell you that there’s a very good chance I will be offending you all again this week, and why is that? Well, because we’re covering yet another religious game from those wonderful human beings at Wisdom Tree called, and I’m not kidding, “Super 3D Noah’s Ark” on the Super Nintendo console.

Scared yet? No? Well that’s probably because we haven’t delved into the belly of the beast just yet, but if you scare easy or become sickened by video games that are so terrible that they may as well be the equivalent of eating bad fish and then washing it down with sour milk, I caution you to go read something else on this fine website.

Like the nightmare that is “Bible Adventures” on the NES, someone at Wisdom Tree didn’t get the memo that people like variety in the soundtracks of the games they play, so once again, we are bludgeoned over the skull with the same four or five tracks that repeat every other level and, of course, the title screen and the screen in between levels.

What’s interesting, or weird, depending on your outlook on such things, is that the level music is very cheery and almost carnival-like in nature for the most part, which doesn’t really go well with what you’re doing, while the title screen and intermission screens have, dare I say, a ‘70s funk vibe to them. I never met Noah, nor am I a cover-to-cover Bible reader, but from what I do know, George Clinton, KC and The Sunshine Band, and The Commodores were just some of the many bands that weren’t around during Bible times, so how music similar to theirs ended up in this game I’ll have no idea. Were Christians big into funk music in the ‘90s?

While you ponder that, let’s also take a second to address the sound effects in this game, from the “spitting” animals, which seem to sound like a man getting a physical (cough, cough), to hooved animals that sound like they’re wearing high heels and, of course, Noah getting attacked, which kind of sounds like he’s somewhat OK with the whole thing. I mean, the guy doesn’t even say, “Ouch.”

There’s a bit of a history lesson and rumor attached to this one, so listen closely. The folks behind “Wolfenstein 3D,” id Software, were so ticked off with Nintendo’s fierce censoring of the SNES version of their game that it has been said that they gave the source code to the folks at Wisdom Tree as an act of revenge. Now, if the fact that the graphics in this game sport the same look as “Wolfenstein 3D” isn’t enough to convince you that this might be true, it is factual that not only did Wisdom Tree purchase the license to the engine from id Software, but both games were being developed at the same time. That being said, that is without question the most interesting story as far as the horrid graphics for this game are concerned.

I never got into games like “Wolfenstein 3D” and “Duke Nukem” for this very same reason. The graphics make you feel like you need your eyes checked, and only when objects are up close can you really tell what they are. Animals like goats and sheep are easy enough, but I had no idea what I was looking at one moment, and it turns out it was an ostrich – a horribly pixelated ostrich, I might add. Did Nintendo want them to censor the ostrich?

The levels are bland, unappealing, and just plain boring. Not only are there creepy giant heads of Noah painted on certain portions of levels, but his creepy face is looking around as you go through the game, in a way that makes you think hanging out with Herbert the Pervert from “Family Guy” might actually be safer. Who decided that Noah should wear purple in between levels? We’re not talking just regular purple here either, folks – we’re talking like this bizarre clash of Grimace from the old McDonald’s commercials and what can only be called ‘70s pimp purple. Maybe that’s why they chose that funky music in portions of this game?

I’m being pretty generous here, to be honest. The concept of this game seems to be putting as many animals to sleep as you can on your restless ark with the use of what can only be surmised as fruit laced with Benadryl, while finding new slingshots and other secrets along the way. Each section has a few levels, and at the end of it all, you face a larger, more difficult animal that may or may require a bigger and better slingshot and, needless to say, more fruit to take down. Let me ask you this – if you went from “Wolfenstein 3D” to this, just how long would you spend sobbing uncontrollably, banging your head against a wall, or nearly hyperventilating from laughter?

The levels are all the same, finding your way out to the next part until you face that boss animal which, by the way, consists of giant monkeys, giraffes, elephants, and a bear hiding behind what appears to be the biggest glob of cooked broccoli or spinach I’ve ever seen. If you’re a devoted Christian out there reading this, I’m not being disrespectful in any manner. I respect all beliefs, but if you wonder why some folks don’t take you seriously, you might want to take a look at this game.

There’s one last thing to keep in mind here. Because this was an unlicensed SNES cartridge, and the only one I’ve read of in North America, you had to run it almost as you would a Game Genie to bypass the region code of a North American SNES console, so you need to ask yourself right now, dear reader, do you really want to go through all of that trouble just to torture yourself? Well, if you do, please don’t come crying to us at Turn to Channel 3 or NEPA Scene saying that we didn’t warn you, because we most certainly did. If you’re all for “Wolfenstein 3D” meets “Creepy Old Dude Fruit Slingshot Wars,” then by all means, go for it. Just be prepared for your parents to call you out of concern.

Well, we’re almost done with Foolish Games Month here, but it wouldn’t be a month about silly games without the Muppets, so stay tuned next time for that, but in the meantime, enjoy this beautiful weather and, as always, game on!