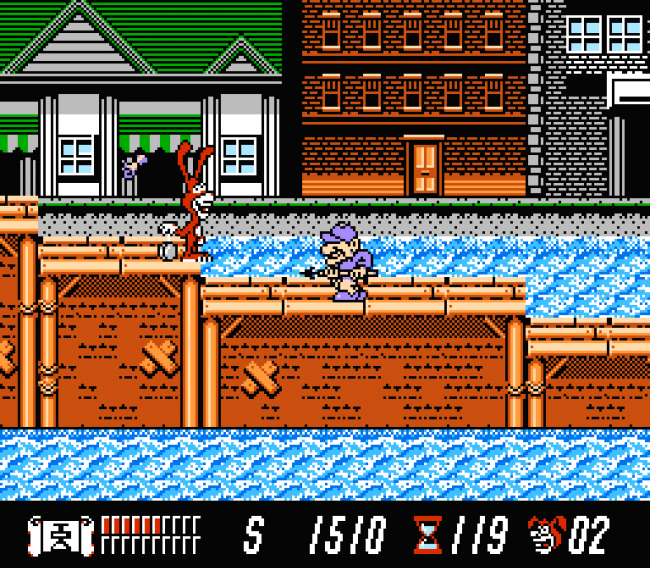 Back before they started simply calling themselves Domino’s – before creating everything from pizza to hot wings to pasta bowls, even chocolate lava cake – Domino’s Pizza was racing against time, subsequently running over people (literally) in hopes of becoming the most popular chain of pizza restaurants in the country. It was during this time that they came up with a character so unique, so quirky, and so, well, let’s just say it – psychotic looking, who had a love… no, a lust for destroying Domino’s Pizza that could only be cured by dressing up in a full rubber body suit, complete with bunny ears for some reason, and using things like his patented Pizza Crusher to get the job done. Even Domino’s Pizza themselves cautioned you with their classic tagline for this unique, um, thing, “Avoid the Noid.”

Keeping April Fools’ Day in mind, I give you Foolish Games Month here on Turn to Channel 3. Today, we’re going to see if Domino’s Pizza was right in telling you to avoid the Noid, even in video games, and if it was a good idea for Capcom to ignore their warning. I give you, pizza lovers and full rubber suit-loving people everywhere, “Yo! Noid!”

When you have a company with the caliber of Capcom behind you, most gamers would just assume the music is going to be good. It’s no secret that Capcom is pretty good with music, but you know what they say about assuming things, don’t you? Such is the case here, as the music is largely forgettable, with nothing to put it anywhere near the soundtracks found in the more prominent members of Capcom’s cache of games.

The sound effects fit the game well and didn’t distract you or take away from the gameplay. They fit just right with this quirky, weird character – and this equally weird game.

Truth be told, the graphics are actually the strongest portion of this game. The Noid looks as he should; the enemies, while not completely outlandish, stand out enough to give this game some individuality; and most of all, the levels are varied and well done. If one has to look at the one aspect of this game that actually makes it playable and enjoyable to some, it would have to be the graphics. It would have been easy enough to simply slap the name of this game on a cartridge and sell it on name alone with graphics that didn’t even look like the main character, but I can at least applaud the efforts of programmers and developers in this category, if no other.

The best way I can discuss this category as it relates to “Yo! Noid” would be to compare it to “Contra,” and no, I haven’t gone crazy. Both games, while obviously miles apart in genre and theme, have one core thing in common – both games are merciless in that they refuse to give your player a life bar. Instead, you have to be extra careful with everything you did, or it’s one shot and you’re out, pal. In the case of “Contra,” it didn’t take away from the overall experience of the game. It also didn’t hurt that the Konami Code was there to save your butt if you really needed it. In the case of “Yo! Noid,” however, you were given no code and, if that wasn’t bad enough, no checkpoints or saves, which means if you die even towards the very end of a level, guess what? If you answered that you have to start the level all the way over at the beginning, you, sir or madam, get a prize.

The game really is a mixed bag as it relates to difficulty, with some levels being a cakewalk, while others are ridiculously hard. The controls are tight, but there are some aspects that seem to suggest the character should float when he jumps. The addition of the Pizza Crusher is a nice touch, but in the level it is present, it creates more harm than good. There are levels where you are without your main weapon, a yo-yo, and you’re given a jump attack instead, which really isn’t totally effective and suffers from some questionable hit detection problems. The bosses in the game are fought in mini games, not true boss battles, and are really just different color Noid doppelgangers, so I feel the game developers lacked originality there, as if coloring the guy you’re trying to take down, Mr. Green, differently made him any more threatening.

Bottom line, the Noid is weird, and this game is pretty weird, too. Sure, there will be gamers who find it quirky but charming, even those who stand behind blind loyalty to Capcom, but this truly was one of those moments where you say to yourself that for every “Mega Man,” “Resident Evil,” “Street Fighter,” and “DuckTales” game Capcom produced, there will always be that blemish, that black eye, and for my money, it will always be, as far as Capcom’s stay on the NES is concerned, “Yo! Noid.”

I don’t put this game on the same level of terrible as other games to come this month, and on pure nostalgia alone as it relates to Domino’s Pizza and their quest to become a player in pizza chains, it makes a fine addition to your NES collection. However, if you’re looking for a game that you won’t feel embarrassed to own or have a hard time telling your gaming friends you have in more than a whisper, then yes, please, for the love of pepperoni, do what Domino’s Pizza said all those years ago and avoid the Noid.

Well, we survived the first one, folks. Next time, we’re going to review a game that, hopefully, when I get through discussing how terrible it is, I won’t be getting struck by lightning, develop a terrible plague, or end up engulfing my town with locusts. Yes, next time we cover the first of two games that proves, even more so than politics, gaming and religion just do not mix!

Until then, I hope you had a great Easter. I plan on devouring what’s left of my Dunmore Candy Kitchen chocolate. Take care, and as always, game on!