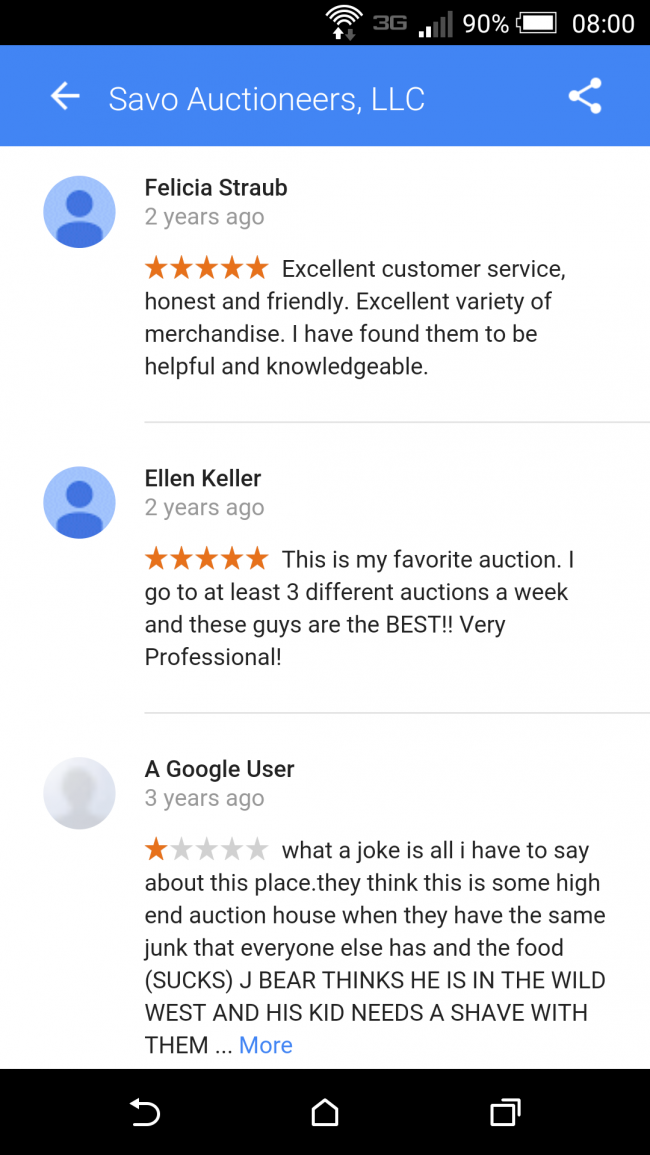 If you Google “Savo Auctioneers,” you will discover a solitary one-star review that was written by an anonymous user more than three years ago. It reads as follows:

what a joke is all i have to say about this place.they think this is some high end auction house when they have the same junk that everyone else has and the food (SUCKS) J BEAR THINKS HE IS IN THE WILD WEST AND HIS KID NEEDS A SHAVE WITH THEM STUPID HANDLEBARS UNDER HIS NOSE they both need a makeover bad i will never ever attend this joke of a place again the absolute WORST that i have ever been to and i have been in some real crappy places [sic]

I do not fear the rare unfavorable review. I interact with hundreds of clients each year – both buyers and sellers – and although I try, it is impossible to make each and every one of them a five-star fan. That’s just the way it goes in business. But I have attempted to get Google to remove this particular review, as it is more of a caustic personal attack than it is a critique of my business. Of course, the search engine giant is deaf to my request. I therefore feel it is time to publicly address and rebut this grammatically atrocious, adolescent temper tantrum regarding the modus operandi and facial hair of the Savo Auctioneers.

Let’s break it down, shall we?

“what a joke is all i have to say about this place.they think this is some high end auction house when they have the same junk that everyone else has…”

I know that the inventory at Savo Auctioneers isn’t on par with the world’s powerhouses such as Christy’s, Sotheby’s, or Bonhams… not yet, anyway. However, we do exercise a quality control that results in a selection of merchandise that bidders from all over North America actually want to buy. I just let what we’ve sold in past auctions speak for itself.

The free refreshments we offer at Savo Auctioneers include water, coffee, and pre-packaged snacks purchased at Sam’s Club (chips, pastries, fun size candy, etc.). For certain auctions, we may even lay out some hot dogs and potato salad. I know such fare is not the haute cuisine you find at other auction houses, but whatever. What’s most troubling to me is the fact that the word “sucks” is all in caps and between parentheses. (WHY?)

I’m not sure why anyone would think that I think that I’m in the Wild West. I’ve never worn chaps or cowboy boots or hung a pair of six-shooters on my hips. When I go to a bar, I don’t expect the bartender to hand over an entire bottle of whiskey for two bits. I don’t ride horses or lasso anything or speak in a cadence akin to Sam Elliot’s. So, really – what the hell?

And as far as my “KID” needing a shave? The one “WITH THEM STUPID HANDLEBARS UNDER HIS NOSE” is my brother, Carlo. He’s neither my kid nor a kid of any kind. He’s an adult male with a wife, two sons, a meticulously groomed handlebar mustache, and a knowledge base that could rival antique/collectible veterans that are twice his age.

“… they both need a makeover bad”

I won’t speak for my brother, but I wouldn’t mind getting a makeover. I’ve been struggling to figure out how to wear my ever-thinning hair. I could use a few new suits. Maybe a mani-pedi? An eyebrow plucking? An earlobe polishing? Whatever it takes to get this anonymous asshole to hate me less.

“…i will never ever attend this joke of a place again”

To placate the vexations of this anonymous “Google User,” we would have to enact the following changes at Savo Auctioneers:

We are no strangers to feedback at Savo Auctioneers. Most of it is positive and encouraging. When someone presents us with a genuine concern, we address it. If someone offers a respectful criticism, we listen. We have instituted changes based on the insights of our clients, but we have never been moved to examine ourselves based on the childish rantings of those who have no idea how to use punctuation.