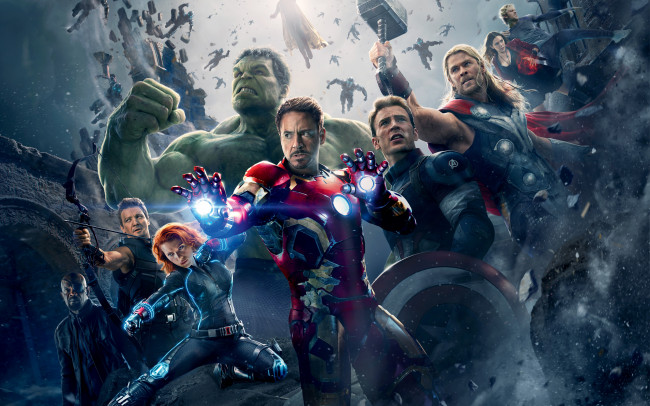 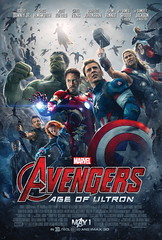 Do you want your summer blockbusters to balance spectacular action and drama with character development and a few laughs along the way? If so, then you may want to check out this little quasi-independent film by a virtual Hollywood unknown that was just released. Can you taste the hyperbole? We hope so, as we’re clearly talking about one the most anticipated films of 2015, “Avengers: Age of Ultron!” May 1 is upon us, and with it, Marvel’s ultimate superhero team returns with what just might be one of the highest-grossing films Marvel and Disney have ever seen.

In this sequel to 2012’s successful “The Avengers,” we see the entire original cast return, along with a few new faces, such as Aaron Tayler-Johnson (as Pietro Maximoff/Quicksilver), Elizabeth Olsen (as Wanda Maximoff/Scarlet Witch), and James Spader (as the villainous robot Ultron). Among the cast, we also find a few other familiar faces, actors, and characters from around the outskirts of the Marvel Cinematic Universe [MCU]. I dare not spoil anything for anyone, so they shall remain nameless. I will mention one reoccurring character, though, that may not have been given enough credit in past movies; Paul Bettany returns as J.A.R.V.I.S., Tony Stark’s AI software (i.e. the voice always heard in his house and inside his Iron Man armor). He is an affable and witty “personality” in the previous movies, and that is no different in this film. Some of the best parts of this film are when he is present, particularly in his new form.

In terms of new faces, even though you do not see his at any point in the entire film, James Spader, as the titular Ultron, is a fantastic addition to this movie in this role. He brings a sense of gravitas to the robotic menace, while making him feel human all at once. Ultron is not your run-of-the-mill automaton bent on wreaking havoc for our heroes. He has goals and aspirations, and nothing will stop him from reaching them. But in the process of obtaining them, Spader’s own charm and acting chops shine through! He quips with the heroes. He is angry, smug, and charismatic as well. Spader brings personality to a character that could have been a one-dimensional nemesis in another actor’s hands.

Joss Whedon also returns to the franchise as both writer and director. Fans of Whedon know what he can do with superheroes and larger-than-life figures; he has shown his prowess through his various works in film, television, and even in the comic book medium. Whedon is able to make these characters huge while also making them incredibly relatable to the general public – he gives them heart. In “Avengers: Age of Ultron,” he shows us sides to these characters never before explored in the MCU, which is chiefly accomplished via Scarlet Witch’s powers and the lingering effects they have on our heroes. What that brings out in the Avengers are crippling fears, doubts, unanswered questions, and the like. We delve into more backstory for a few of our heroes because of those human qualities. Even for Thor, an actual god, it’s inescapable.

This is honestly a boon for Jeremy Renner’s Hawkeye, as he gets a huge character boost from this. He may not have had much of a presence in the first Avengers film, but in “Age of Ultron,” he is front and center for everyone to see. He isn’t just the guy who carries a bow and a quiver of arrows; he is an important cog of the team. He is a hero. He is an Avenger, and that very essence is showcased and highlighted in this movie.

The movie itself starts off with a bang, as there is no need for introductions. Marvel knows this. Instead, we are thrown right into a huge battle in the snow-covered landscape of Eastern Europe. The action is frantic and, for fans especially, grin and giggle-inducing, and it’s not just this battle, but the entire movie! But even with all that action, Whedon slows it down at times. At one point, the heroes are visibly defeated, so what does he have them do? He has them regroup and talk things out, strategize. What other director would bring an action movie to a grinding halt for 15-20 minutes of character introspection? He does, and it works out really well for the pacing of the film.

The first movie is great, but it did feel a bit localized, as most of the action in “The Avengers” happened in or above New York City, with short detours to a military facility and Germany. “Avengers: Age of Ultron” is definitely a global affair and confirms the team’s own moniker from the comics: “Earth’s Mightiest Heroes.” The film spans continents as we are taken to a small Eastern European country; to Johannesburg, South Africa; to an “undisclosed location” in New York; and even to Seoul, South Korea. Besides the New York locale, major action sequences take place in every big city listed, exemplifying the Avengers as a team who are there to defend the entirety of Earth.

If there are any flaws in “Avengers: Age of Ultron,” they weren’t big enough to be seen, as the movie never felt long or drawn out. The breaks from the action were welcome, as they allowed for character development and exploration. Even with all the action and drama, there are plenty of laughs to be had; these are “real people” in Marvel’s movies. One coping mechanism for stress is to crack a joke, so it makes sense that these heroes would crack wise in such daunting scenarios. The only flaw, and it isn’t a flaw of the movie itself, is that it may be a little hard to follow if you have only seen “The Avengers” previously; that is the double-edged sword of what Marvel is producing. Many of these movies (“Iron Man,” “Thor,” and “Captain America: The First Avenger”) led – to some extent, anyway – into the next film. There are a few points in this movie where, if you have not followed the MCU as voraciously as some have, you may be slightly confused.

It may not be fair to try and compare “Avengers: Age of Ultron” to the first film. While they were both written and directed by Whedon, they feel like entirely different movies. Then again, story-wise, these characters aren’t the same people we saw in that first film, either; they have grown in their own solo movies or as supporting cast members (though we seriously need a Mark Ruffalo Hulk and solo Black Widow movies). That is one benefit of this shared movie universe – continuous character development!

Based on what was present in this movie alone, we cannot help but endorse “Avengers: Age of Ultron” wholeheartedly. The action is outstanding. The dialogue and acting are top-notch. The special effects are better than they have ever been. There are numerous “Holy shit!” moments to witness, yet ample “feels” for the audience as well. It hits all the notes one would expect out of a superhero film, and some notes that are uniquely Whedonian (yep, that’s an adjective now), while never becoming boring or lackluster. See it this weekend, then plan on seeing it again soon after.