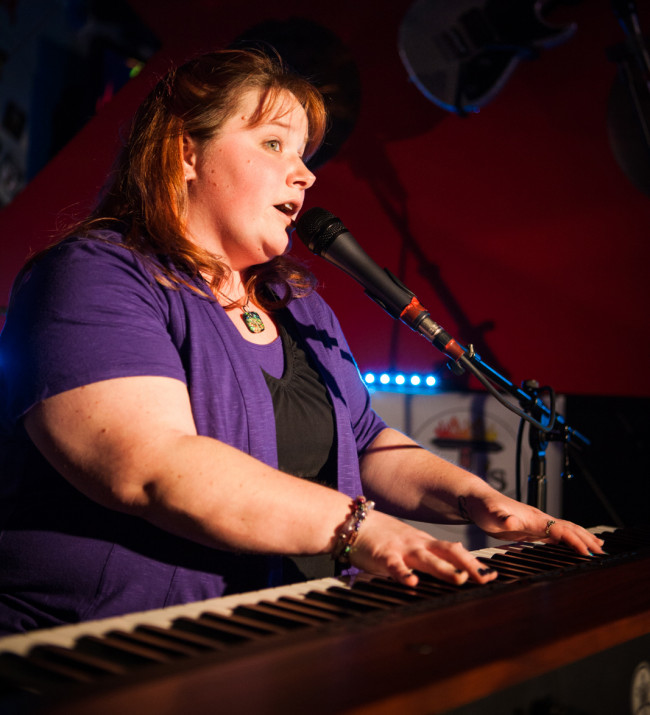 Every week of NEPA Scene’s Got Talent, our free open mic and talent competition at Thirst T’s Bar & Grill in Olyphant, we feature a quick Q&A with the latest audience vote winner, which was singer/songwriter Jenn Johnson on April 28.

We asked the 31-year-old Swoyersville resident about winning Week 6 with her original songs on keyboard and her distinctive take on “Toxicity” by System of a Down.

JENN JOHNSON: I had been wanting to do this for quite some time. I’ve been seeing it on Facebook and hearing about it from others who have participated. I tried it out at the last minute last week, and I enjoyed it so much that I wanted to come back!

JJ: I started playing piano when I was 7, and I’ve been singing pretty much since I’ve been able to make sound. I started writing/composing songs when I was 13.

JJ: Music has been a part of my life for as long as I can remember. It wasn’t anything in particular that got me singing; I just started doing it. One of my earliest memories was belting out some classic rock songs in the back of my parents’ car on road trips to visit family when I was really little. It’s just always been there.

I became interested in piano both in grade school music class and through listening to classical music at my aunt and uncle’s house as a child. My parents didn’t know if I’d stick with it, so I started out on this tiny Yamaha keyboard that sat on my lap. Despite its limitations, I truly loved playing. It was my dad’s idea to start singing and playing together, and once I started doing that, a lot of doors were opened to continue music, so I just never stopped.

Songwriting, for me, was born as a way to cope following my grandmother’s death. We had been very close, and I had had a really difficult time dealing with it, so I sat down at the piano one day and started putting my feelings to notes. I wrote poetry as well, so I eventually started adding lyrics to the music. It helped me get through, as it has continued to help me get through many of my trying times over the years. It’s still primarily why I write.

JJ: Both! I’ve been making a career out of singing and playing since I was 16. To this day, it’s what pays my bills. I teach voice and piano lessons, direct a choir, frequently work as a music director for shows at Phoenix Performing Arts Centre, play and sing for weddings/funerals/events, and do gigs at local bars, cafés, parks, and coffee shops. It makes for a hectic schedule sometimes, but I really enjoy it. Whoever said, “Do what you love and you’ll never work a day in your life,” was pretty on point.

As for songwriting, I’m currently in the studio finishing up my full-length original album, “Window.” I’m hoping that that will be able to help me move forward in the music industry, since it will be able to give a more complete image of me as a songwriter than I can provide with just myself and my piano.

JJ: I was so excited! I couldn’t even contain it. My birthday was this week as well, so it felt like a really great birthday present.

JJ: I think people enjoyed the songs and the performance. I really wanted to show a contrast in my original songs. I think the two that I chose to play really helped do that, and it helped draw people in. I hadn’t originally planned on closing with a cover, but people really seem to love that one and request it all the time, as it was tonight, so I think that helped round out the performance.

JJ: That is going toward my studio time this weekend!

JJ: I do, though I’ve cut back quite a bit recently to focus more on recording, as well as attend to my other musical demands (upcoming student recitals, NEPA premier of “American Idiot: The Musical” at Phoenix, etc.).

I will be playing the opening Second Friday Art Walk in Pittston at Pocket Park (next to Napoli’s Pizza) Friday, May 8, and I will be stopping by the new Open Mic Night at The Main Bean coffee shop in Luzerne very soon. I am scheduled to perform at the Women’s Rights to Rock music festival in Seneca Falls, New York in July, and I’m planning on an album release weekend this summer, as well as a cooperative show with local visual artist Omar Rodriguez Jr. on August 1. There are some other things pending over the next several weeks, but that’s all I know for sure right now.

NS: Where can people find your music online? Do you have a website?

JJ: Yes, I do! And that’s pretty much the best way to stay up-to-date on what’s going on with both the album and upcoming shows. You can find me at jennjohnsonmusic.com and on Facebook, YouTube, and Twitter.