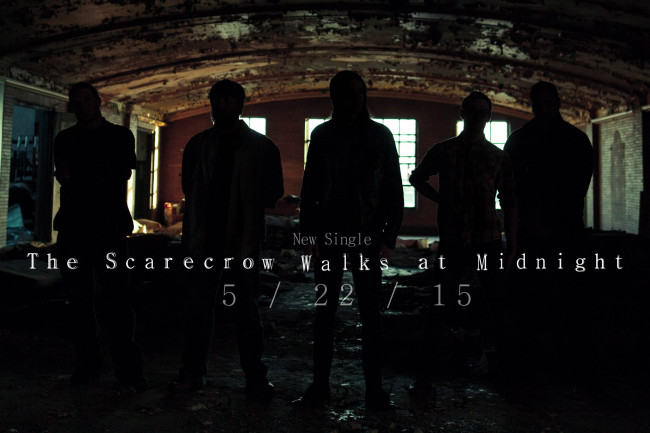 Since the beginning of 2015, Scranton hard rock band Silhouette Lies has been locked in the studio working tirelessly on their debut full-length album. Now NEPA Scene gets to unleash the exclusive premiere of the first haunting single from that album, “The Scarecrow Walks at Midnight.”

“Lyrically, the song is about a serial killer and his relationship with his latest victim. Some see that as morbid, but I’ve always been inspired by bands and songs that tell a story. I feel like ‘Scarecrow’ is lyrically inspired by Iron Maiden and Alice Cooper in that it kind of tells its own weird little story in a 6-minute piece,” lead vocalist Nick Van Wagenen explained.

“‘Scarecrow’ has been one of our favorites, and our fans’ favorites, since we started playing it in 2013, so we’re really excited to finally release this song and for people to hear it.”

“We recorded and mixed the song at Side B Studios [in Wapwallopen], owned, operated and engineered by our very own drummer, Tom Godin, formerly of Absolution and Digitial Collapse. He joined the band late last year. It was mastered by Disc Makers,” guitarist/vocalist Rafael Pimentel added.

“I wrote a good chunk of the music. The opening melody was born of me trying to write something Radiohead-inspired, though the remainder of the song clearly evolved into something else. It’s a heavier song with a cool riff that calls back to that arpeggiated melody and gets interesting towards the latter half with the breakdown and somewhat reggae-inspired part.”

Named “Punk/Hardcore Band of the Year” at the 2014 Steamtown Music Awards, the quintet, which also includes guitarist Eric Manley and bassist/vocalist Nick Savinelli, doesn’t have a definite title or release date yet for the new album, though Pimentel jokingly promised that “it won’t be a repeat of GnR’s ‘Chinese Democracy.’”