TURN TO CHANNEL 3: ‘Conker’s Bad Fur Day’ gave us the best days of the N64 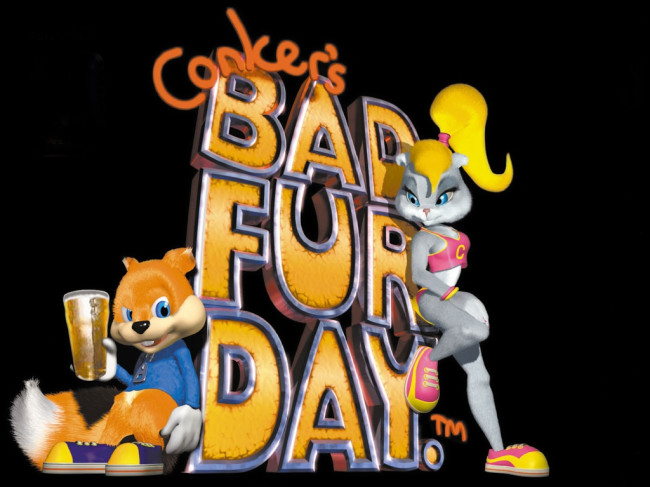 May was a great month for your scribe. Not only did I turn 34 with some great family and friends around me, but I also got to go to an old school arcade, purchase some classic games that I had been looking for seemingly forever, and I got an original Teenage Mutant Ninja Turtles Party Wagon I had been wanting since the age of 9. Hey now, stop laughing.

We wrap up Nick’s Faves Month with a legendary Nintendo 64 title that I’m sure many of you have heard of. It’s yet another game that pushed the envelope in the industry and changed the way we look at gaming, a trend quite common with all my entries this month. Today on Turn to Channel 3, we take a look at an old college favorite of mine, “Conker’s Bad Fur Day.”

For those not in the know, this was a game that, while appearing sugary sweet from a distance (a safe distance, mind you), was anything but, carrying with it a seemingly religious cult of fans not seen with many other games for the console. I don’t want to get into too much here in the introduction, but I’ll just say that I can recall many fond evenings sitting in my dorm at Keystone College with some great friends as we laughed, yelled, and generally made complete fools out of ourselves with this one. So without further ado, let’s get right into “Conker’s Bad Fur Day!”

To many gamers, the soundtrack to “Conker’s Bad Fur Day” isn’t one that would even crack their Top 10, as most of the music isn’t this epic, over-the-top kind of style through most of the game. There are moments where the music is quite eclectic, ranging from a cartoony style to music that could come out of a night club, or even a movie like “The Matrix,” which is parodied later in the game, and there’s even a bizarre opera-style song (more on that later for those who know what I’m referring to here), but it’s the voice acting and sound effects that are really the stars in this game as far as the sounds go.

While certainly diverse (that’s an understatement), most of the smaller characters you encounter in the multiplayer (wait for it) and story portions of the game are pretty simple in design, ranging from things like Conker (of course!) to zombies, teddy bears, grim reapers, cavemen, and other animals, just to name a few. However, the larger scale and more important characters you meet along the way are truly unique and a sight to behold, at times bordering or downright crossing the line of bizarre.

You encounter everything from talking scarecrows to gargoyles, flowers, bees, and even clock gears, but for my money, no one character comes close to ripping apart the envelope of good taste quite like the talking and singing pile of poo (complete with pieces of corn for teeth) you must defeat in one portion of the game. The environments are pretty well done and are also diverse, but they don’t really capture the imagination and feeling of the game quite like the zany cast of characters you find along your journey.

Sure, the story mode in this game is pretty awesome, but it just doesn’t compare to the overall fun of the multiplayer mode. I can still fondly recall putting in a whole bunch of cheat codes just to unlock every character that could be used in multiplayer wars between friends, and we all had our chosen weapons. My roommate in college would let everyone know he was coming by firing off loud bazooka blasts, while another visitor to our room would hide out and snipe whoever he could see from a safe distance. My best friend, Paul, usually enjoyed himself by lighting his enemies on fire, and we all laughed, as he too would end up getting burned. Yours truly, on the other hand, preferred the subtle and hilarious tactic of running around throwing knives aimlessly and hoping one would stick to the forehead of one of my enemies, laughing maniacally the whole time as my roommate, a frequent recipient of such an attack, would curse my name. While other college students were trying to make themselves more brilliant, we were all gathered around making ourselves more deadly and, subsequently, far bigger nerds.

I still prefer this style of multiplayer to anything “Call of Duty” can come up with on a yearly basis. The sheer variety of weapons, the locations to hide for a sneak attack, and some killer music in many of the levels gives you a fun time just in multiplayer mode alone. You can even go into a restroom area and pee on the floor! Who says video games are crass and unsophisticated?

“Conker’s Bad Fur Day” is another one of those instances where Nintendo and Rare hit it right out of the ballpark, but in doing so, many years later, have made a game that is becoming increasingly more difficult to find, and thus more expensive when it comes to purchasing it. Seemingly every week I get requests about this game in my store, and the sad truth I have to tell my customers is that even if I could find a copy for the store, I’d have to charge quite a bit of money for it, so much that many of my customers could not afford it. It is a game that luckily fell into my lap for free in my own collection (Thank you, Chad!) but goes for quite a bit online. Thankfully, it is also a game that, for the most part, is certainly worth the money (though I find charging more than $80 for it loose is insane) but not the headache that comes from tracking down a copy. If you do find one, hold on tight to it because it is certainly a Halley’s Comet-type game, something that comes out once in a great while in the world of video games that turns everything upside down – and for the better.

Thank you for joining me this month to look at some of my all-time favorite games. Next month, well, if you like shooting at stuff, action, explosions, and what have you, then you will certainly enjoy what I have for you in June!

Until then, if you know someone who is complaining about the weather and did the same thing when we were freezing in winter, smack them in the arm (or wherever) and, as always, game on!