TURN TO CHANNEL 3: ‘EarthBound’ on the SNES lives up to its all-time classic RPG status 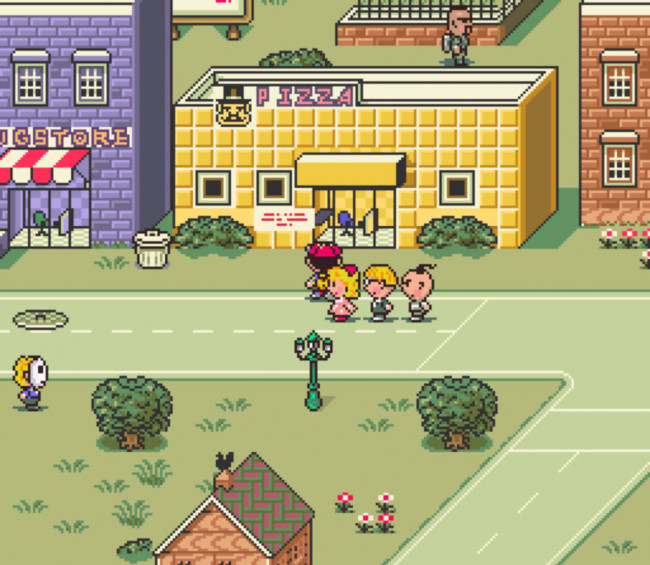 It’s May, the month of the birth of your favorite gaming scribe (as I turned 34 prior to the publishing of this fine review), so what does the Turn to Channel 3 columnist do on his favorite month all year? Why, he takes a look at four of his favorite games in what shall be known as Nick’s Faves Month!

Where does a guy like me begin? Today’s topic is one of my all-time favorite games on the Super Nintendo, a game that needs little introduction to those diehard classic RPG fans – I’m talking about “EarthBound!” So, with this mind, let us journey with Ness and friends as they take it to the vile Giygas and his army of evil foes!

One of the key ingredients to a superb RPG is a great soundtrack, as it almost seems synonymous with greats like the “Final Fantasy” series and other classic RPGs on the SNES. “EarthBound” is no exception, with tunes for towns like Onett, Twoson, Winters, and one of my all-time favorites, Fourside. If these tunes aren’t enough for you, there’s also the music that plays when you enter a hotel or drug store, some great varieties of battle music, and who can forget those catchy Runaway Five tunes that play whenever you encounter this legendary traveling band?

The story and soundtrack mesh so well together, as do the sound effects you encounter in battle mode. The best games, regardless of genre, have sounds and music that, all together, give them their own distinct flavor and take on gaming, and “EarthBound” has earned its cult status because it is unique in every way, starting with the soundtrack and sound effects.

In truth, “EarthBound” doesn’t blow you away with its graphics. They are pretty standard for the time, as most characters you encounter are either variations of a standard model or are even used over and over again in towns, and this is even true of some of the enemies. However, the towns are brilliantly designed, as are the portions of the game where you do battle. There are unique character designs that show up right when they need to and, of course, the battle mode artistry is pretty awesome in comparison to what the enemies look like as you’re walking through the game.

Once again, “EarthBound” is a game that has created characters that are so quirky they are almost universally known because of how different they are. This is quite apparent; while every “Final Fantasy” fan knows the beloved Chocobo and Moogle, “EarthBound” fans tout their love of Mr. Saturn and Ness. A great game can only be considered great because of the parts inside of it, and you can’t tell a good story without engaging characters and environments. “EarthBound” gives you that in spades.

Let’s tackle the elephant in the room. Like all RPGs of the time, “EarthBound” is chock-full of that grueling task of grinding, leveling up your characters until you are ready to tackle a boss and move on to the next chapter in the story. That being said, the menus for battle and such are pretty straightforward, and you can select the speed of text you want. Playing “EarthBound,” exploring in it, talking to people – it all creates a very well-executed and balanced story. Each character you use is unique in what they can do and what weapons they specialize in. Like all RPGs, there are sections of it that are stronger than others; some sections are incredibly frustrating, while others are a blast to play.

This game came along at a time when the genre needed something to give it a sudden jolt, a breath of fresh air, and “EarthBound” did just that and then some. Packaged in an oversized box with scented stickers and a strategy guide, it was unlike anything a gamer had seen before, and that’s why it is so highly sought-after, with a price tag that often begins at $100-$200 – and that’s just the cartridge alone! If you have a Wii U, you owe it to yourself to purchase this on the Virtual Console. If you’ve played it before, you know full well what you’re missing, but if by some chance you haven’t or have been on the fence about playing it, I can assure you, it is unlike any other RPG you’ve ever played.

Keep this in mind if you’re in doubt over the popularity of this franchise. Gamers were so upset that the follow-up to this was never released in North America that they created a patch to translate it so you could play it on a Gameboy Advance emulator. Not only that, but there’s a fan-made tribute game because gamers can’t get enough of “EarthBound.” This is a franchise that was supposed to have a game on the Nintendo 64, but it never came to pass, and fans are still bugging past developers to create a brand new “EarthBound” game. Fans of the game are very dedicated, and something tells me if you play this game, you might yourself in some great company, yours truly included.

Well, that does it for me in this edition of Turn to Channel 3. Join us next time as we continue looking at some of my all-time favorite retro games. Next week, we do a little bit of time traveling as we take a look at another great SNES RPG.

Until then, enjoy this awesome weather and, as always, game on!